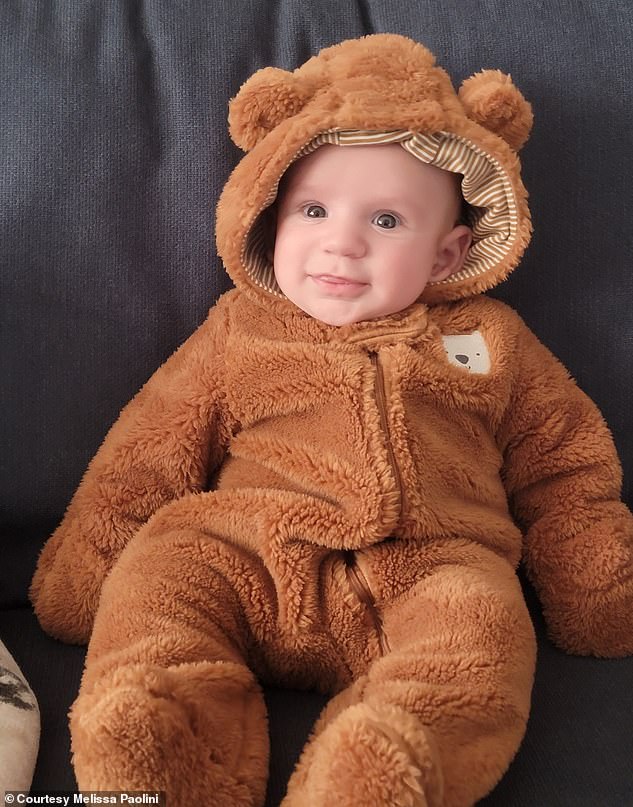 Concerned parents are begging the U.S. Food and Drug Administration (FDA) to reopen the nation’s largest baby formula plant after the nationwide shortage has left their infants hungry and ill.

Families from across the America reached out to DailyMail.com, detailing their struggles and pleas for help as store shelves meant to hold formula remain barren and price gouging resellers auction the products online at ungodly mark-ups.

One mother, whose six-month-old son has a severe dairy allergy, shared heartbreaking photos of a rash that overtook her infant’s back after they were forced to switch formula brands.

A father who traveled to more than a dozen retailers within 20 miles of his Pennsylvania home said he resorted to spending nearly $600 on eBay to get the formula his child needed.

Meanwhile, Republicans sounded the alarm Thursday after discovering baby formula is being sent to border facilities while American mothers are facing empty shelves amid massive shortages.

President Joe Biden will make his most visible move to try to tackle the shortage, as he meets with retailers and manufacturers on Thursday to try to find a way out of the crisis. The White House is also expected to announce new administrative steps to try to get more formula onto store shelves.

Struggling mothers also shared the intimate details of their journeys with breastfeeding, with some noting they started to do so more and others sharing how they are devastated they can’t nourish their child through breast milk.

‘I was diagnosed with cancer when I was three months pregnant with my twins and was unable to breastfeed,’ mother Christina Kikola shared. ‘Breastfeeding is not an option for everyone.’

‘My breast milk production could not keep up with [my son’s] demand,’ said Belle Holmes, whose son developed a rash from his new formula. ‘Not to mention the slightest trace of dairy or dairy by-product in my diet would severely impact him.

‘I have had to resume pumping and breastfeeding, which limited the feasibility of me returning to the workplace,’ Jillian Ayorro, mother of a nearly two-year-old with allergies and special dietary needs, shared. She also noted that by eliminating the allergens and foods that would harm her daughter, she was depriving herself of necessary nutrients.

These parents, along with dozens of others who contacted DailyMail.com, have called on the FDA to reopen the Abbott Laboratories plant in Sturgis, Michigan and are asking Congress take steps to diminish the formula shortage crisis.

The Virginia firm Datasembly released a report revealing a nationwide out-of-stock rate of 43 percent for formula, putting low income families and those with special needs at risk.

Lawmakers on Capitol Hill are also pressing for action and have called the situation ‘increasingly alarming.’ The House Energy and Commerce Committee has scheduled hearings to address the shortage, but those that don’t start for two weeks.

GOP Representative Kat Cammack tweeted two images Thursday, one showing full shelves of baby formula and food from a processing center at the southern border and another showing empty shelves where baby formula was supposed to be at an American grocery store.

‘The first photo is from this morning at the Ursula Processing Center at the U.S. border. Shelves and pallets packed with baby formula,’ Cammack wrote. ‘The second is from a shelf right here at home. Formula is scarce.’

‘This is what America last looks like,’ she added.

Meantime, Abbott Nutrition announced Wednesday that it could have its Michigan plant up-and-running again in two weeks, once given the green-light from the FDA. However, it would still take an additional six to eight weeks before the manufacturer could start delivering product to store shelves.

The formula shortage is the result of supply chain disruptions and a safety recall, and has had a cascade of effects.

Retailers are limiting what customers can buy, and doctors and health workers are urging parents to contact food banks or physicians’ offices, in addition to warning against watering down formula to stretch supplies or using online DIY recipes.

The FDA warned consumers on February 17 to avoid some powdered baby formula products manufactured by Abbott Nutrition, which then initiated a voluntary recall.

According to findings released in March by federal safety inspectors, Abbott failed to maintain sanitary conditions and procedures at its Michigan manufacturing plant that was linked to a cluster of infant Cronobacter sakazaki infections.

The findings showed the facility didn’t maintain clean surfaces used in producing and handling the powdered formula. Additionally, inspectors found a history of contamination with the bacteria, including eight instances between fall 2019 and February of this year.

An Abbott spokesperson told DailyMail.com Wednesday that ‘after a thorough review of all available data, there is no evidence to link our formulas to these infant illnesses’

The agency FDA claims it is working with U.S. manufacturers to increase their output of formula and streamlining paperwork to allow more imports.

The FDA also noted that supply chain issues associated with the pandemic were part of the problem and that consumers bought more baby formula in April than in the month before the recall.

Baby with ‘severe’ allergies breaks out after forced formula switch

Belle Holmes, like many other parents, is struggled to find her six-month-old’s preferred formula brand amid the nationwide shortage.

‘We have had to switch brands three times and each one has eventually gone out of stock,’ she told DailyMail.com.

Her son suffers from a ‘severe dairy allergy’ which makes it significantly harder to provide him with the proper nutrients he needs.

She also has to worry about adverse reactions caused by exposure to allergens.

Holmes shared photographs of her son’s back covered in a rash that she has linked to consuming a new brand of formula.

Additionally, the concerned mother explained that she cannot turn to breast feeding because she ‘could not keep up with his demand’ and was worried she ‘would severely impact him’ if she consumed any dairy whatsoever.

‘We are on the last brand we can find and are nervous about what will happen next,’ she added.

Joe Bones, of Altoona, Pennsylvania, said it has been impossible find Similac Sensitive, the brand of formula he feeds his son, for nearly two months.

The Bones family has struggled to find the speciality formula since their son was born last November, but claims the nationwide shortage and Abbott recall has greatly exasperated the situation.

‘I went to eight different grocery stores, three different Walmarts, Target and every pharmacy in a 20 mile radius with no luck finding the formula for my son who has a sensitivity to milk,’ Bones told DailyMail.com. ‘At the start of recall when I couldn’t find any in stores I had to resort to going to eBay and spending nearly $600 out of pocket on formula.’

The father said he was uncertain when the product would be back in stores, so he ‘bought up all I could.’

While he noted that most resellers were ‘pretty reasonable’ with pricing, noting he would pay about $15 over retail price, that others were looking to take advantage of parents in a hopeless situation.

‘I saw people on there asking for $200 for a single can of formula,’ Bones said. ‘I can only imagine the people who don’t have the means and extra to buy out of pocket.

‘I wouldn’t even want to be that parent that was feeding their baby and they hit the bottom of the can and had no more left and couldn’t find any anywhere.’

Nationwide about 40 percent of large retail stores are out of stock of baby formula, up from 31 percent in mid-April, Datasembly reported.

More than half of U.S. states are seeing out-of-stock rates between 40 percent and 50 percent, according to the firm, which collects data from 11,000 locations.

Bones, who said the months following the recall have been ‘extremely stressful and frustrating,’ said he wants the government to make policy changes to prevent future shortages.

‘I would like to see lawmakers step in and force stricter sanitation standards so something like this does not happen in the future,’ he shared. ‘I would also like stricter standards on reselling formula over the internet.’

The FDA, in a recent budget document, asked Congress to give the agency new authorities to prevent a critical shortage from occurring in the future.

‘No law requires manufacturers of infant formulas or essential medical foods to notify FDA when they become aware of a circumstance that could lead to a shortage of these products,’ the agency penned, noting it would like to see new protocols requiring companies to notify the FDA of anticipated supply chain interruptions.

White House press secretary Jen Psaki said Monday the Biden administration is working with manufacturers to ensure baby formula makes it back on empty shelves as frantic parents work to ensure their children are fed.

‘Ensuring the availability of these products’ is a ‘priority’ for the FDA, Psaki said at her daily press briefing, noting ‘they’re working around the clock to address any possible shortage.’

It is unclear if the administration’s response will include need requirements for manufacturers, as the FDA requested.

Christina Kikola, of Erie, Pennsylvania, was diagnosed with cancer while three months pregnant with her twins, who are now seven-months-old.

One of her infants, Nora, has ‘severe allergies’ and can only tolerate the Elecare or Neocate formula brands.

Kikola said she tired four brands of ‘regular’ formula before finding a product her daughter could tolerate. Now, due to the shortage, she is unable to find those brands.

‘Prior to finding Neocate she was constantly puking, crying in pain, arching to ‘get away from her belly’ so it seemed, and having bowel issues,’ Kikola told DailyMail.com. ‘Then it was recalled. Now it’s on worldwide back order.’

The mother has tried feeding Nora a comparable formula brand, but claims the baby has ‘gone back to not eating well and having bowel issues.’

Kikola has been in constant contact with her pediatrician’s office, who is ‘doing everything they can to try and get us Neocate,’ but the supply remains limited.

‘Reopen the plant in Michigan, open facilitates wherever possible to start mass production,’ the mother pleaded. ‘Our babies need fed. I was diagnosed with cancer and am unable to breastfeed. Breastfeeding is not an option for all.’

She also urged legislators to cap the cost of formula, saying: ‘$50+ for a 14oz can is insanity and should be illegal. Babies need fed!!! Inflation is up ones no one’s wage is up to match it.’

Mother rallies parents to call on legislators: ‘We need to stand up!’

Melissa Paolini, of Sicklerville, New Jersey, is organizing a rally of mothers struggling to feed their children and calling on federal officials to take action.

‘It is unreal that we live in America in 2022 and can’t feed our babies,’ she told DailyMail.com. ‘Moms are having to switch formulas for their babies nonstop. It’s so unfair. We need to stand up about this. We are our babies voice!’

Paolini’s four-month-old son is on a special diet and uses a formula from a company called Stymco. The New Jersey mom said she ordered the product more than a week ago, but it has yet to arrive.

‘I get my son’s month supply from them,’ she explained. ‘They never contacted to tell me it wasn’t coming.’

She said that several other parents have cited the same complaints.

‘This isn’t the only company that people are having issues with. It’s everywhere,’ she argued. ‘I’ve called the GI doctor and the pediatrician. No one can help.’