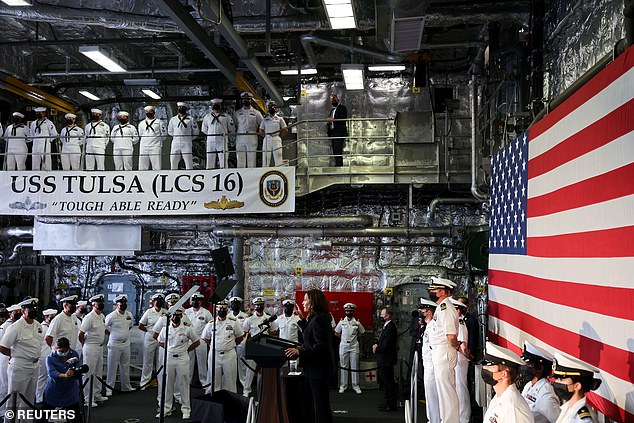 The US Navy will scrap nine warships worth $3.2 billion – despite some being just three years old – because their technology is already obsolete.

Anti-submarine systems on the Freedom-class combat warships, four of which were commissioned in 2019 and 2020, ‘did not work out technically’, the Navy’s operations chief said.

Admiral Michael Gilday asked Congress to sign off on the scrapping, which will save the Navy $391 million.

He told the House Armed Services Committee: ‘I refuse to put an additional dollar against a system that would not be able to track a high-end submarine in today’s environment.’

Committee chair Rep. Adam Smith said: ‘Regardless of how old they are, that’s a lot of money to be spent to get pretty close to nothing.

‘They’re incredibly expensive, and they don’t have the capabilities that we expected.

‘We can’t use them, number one because they’re not ready to do anything. Number two, when they are, they still break down.’

The nine $3.2bn anti-submarine warships set for the scrap heap

It will serve just three of its 25-year planned service life before it is taken for scrap.

The touted LCS vessels, which were thought to be the ‘future’ of the US Navy, are among 24 warships to be decommissioned in 2023.

‘The issue was identified following routine quality assurance checks and does not pose a risk to the safety of Sailors on board the ships.

‘Similarly, the issue poses no safety risk to the ships affected nor does it hinder the ability to get underway and execute missions’, navy spokesperson Alan Baribreau told The Navy Times.

A 2016 Navy plan placed the Freedom-class variants were in Mayport, Florida.

Crews at the Naval Station will now have to wait for new ships to arrive.

The news comes as fears of China’s growing navy persist.

Beijing will have 460 ships by 2030, the Pentagon has estimated.

That will make China’s the world’s largest navy, overtaking the United States.

Under current Navy plans, the US will have just 280 ships five years from now.

Admiral Gilday told the Senate last week that America would be unable to fight a war on two fronts with its current equipment.

Answered speculation from Sen. Josh Hawley that the US could have to fight in eastern Europe and the South China Sea at the same time, the admiral said: ‘I think we’d be challenged.

‘Right now, the force is not sized to handle two simultaneous conflicts. It’s sized to fight one and to keep a second adversary in check, but in terms of two all-out conflicts, we are not sized for that.’

Sen. Jim Inhofe, ranking member of the Senate Armed Services Committee, tweeted: ‘With the Chinese Navy steadily climbing to 460 ships by 2030, the unforced errors in Navy shipbuilding, like the Littoral Combat Ship, must stop.

‘Programs that can scale up and grow our fleet must be the priority.’