The US Penitentiary at Terre Haute. / Public domain.

US Attorney General Merrick Garland issued a moratorium on federal executions while the Department of Justice conducts a review of its policies and procedures, the department announced Thursday.

The moratorium comes after the Trump administration had resumed federal executions after a 17-year hiatus.

In a July 1 statement, Garland said the Department of Justice “must ensure that everyone in the federal criminal justice system is not only afforded the rights guaranteed by the Constitution and laws of the United States, but is also treated fairly and humanely.”

“That obligation has special force in capital cases,” he added.

Although the department said no executions will take place while the reviews are conducted, the moratorium does not formally end federal executions and they could be legally resumed by this or a future administration.

President Joe Biden called for an end to the use of the federal death penalty as a candidate for president, but that call marked a shift in position. According to the AP, in 1994, then-Sen. Biden helped pass laws that added 60 federal crimes that could be punished by death. Some opponents of the death penalty began to express frustration with inaction on the issue.

Krisanne Vaillancourt Murphy, executive director of Catholic Mobilizing Network, said in a statement that the federal death penalty is “a flawed and morally bankrupt system that violates the sanctity of human life.”

She said the moratorium, “though a discernible first step, is not enough on its own.”

“It does nothing to redress the horrors of executions nor the excesses and inequities in the federal death penalty system,” Vaillancourt Murphy said. “More needs to be done.”

Vaillancourt Murphy added that “History has shown us how mere stopgap actions of one administration can leave the door wide open to future government killing sprees.”

“President Biden promised a permanent road closure on the federal death penalty; a moratorium is more like a temporary stop sign on the road to federal executions,” Vaillancourt Murphy said.

While the Church teaches that capital punishment is not intrinsically evil, both Pope Francis and his immediate predecessors have condemned the practice in the West.

Regarding the execution of criminals, the Catechism of the Council of Trent taught that by its “legal and judicious exercise” civil authorities “punish the guilty and protect the innocent.”

Breaking:  Okowa calls for all inclusive governance to curb agitations rocking the country

St. John Paul II called on Christians to be “unconditionally pro-life” and said that “the dignity of human life must never be taken away, even in the case of someone who has done great evil.” He also spoke of his desire for a consensus to end the death penalty, which he called “cruel and unnecessary.”

And Benedict XVI exhorted world leaders to make “every effort to eliminate the death penalty” and told Catholics that ending capital punishment was an essential part of “conforming penal law both to the human dignity of prisoners and the effective maintenance of public order.”

In August 2018, the Congregation for the Doctrine of the Faith issued a new draft of the Catechism of the Catholic Church’s paragraph regarding capital punishment.

Quoting Pope Francis’ words in a speech of Oct. 11, 2017, the new paragraph states, in part, that “the Church teaches, in the light of the Gospel, that ‘the death penalty is inadmissible because it is an attack on the inviolability and dignity of the person,’ and she works with determination for its abolition worldwide.”

Reasons for changing the teaching, the paragraph says, include: the increasing effectiveness of detention systems, growing understanding of the unchanging dignity of the person, and leaving open the possibility of conversion.

Fr. Thomas Petri, O.P., a moral theologian at the Dominican House of Studies in Washington, D.C., told CNA at the time that he thinks this change “further absolutizes the pastoral conclusion made by John Paul II.”

“Nothing in the new wording of paragraph 2267 suggests the death penalty is intrinsically evil. Indeed, nothing could suggest that because it would contradict the firm teaching of the Church,” Fr. Petri continued. 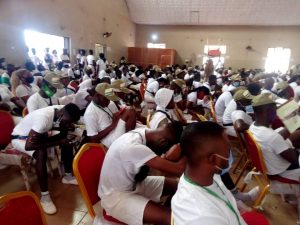