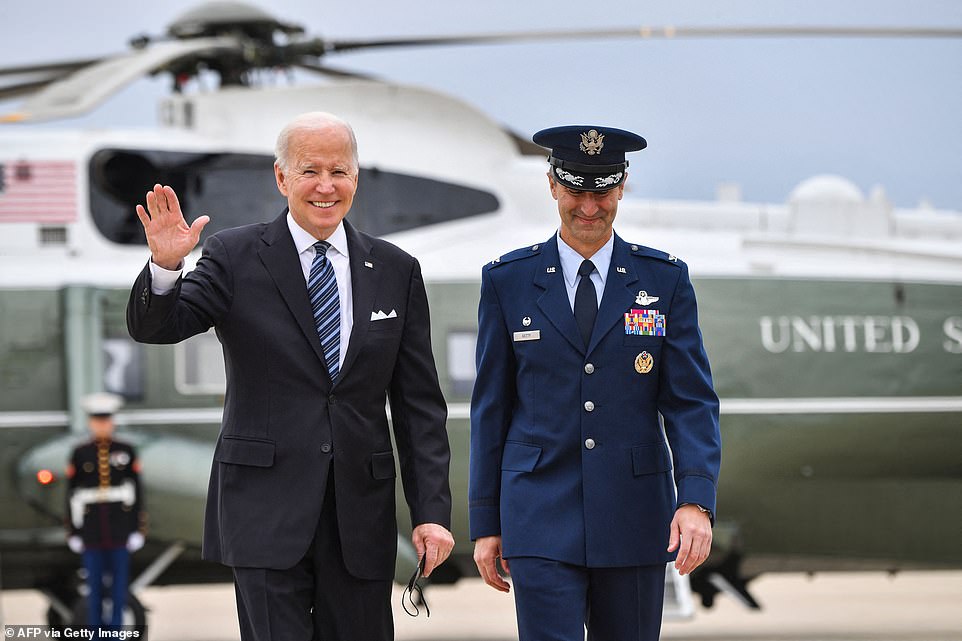 The US Air Force tested the munitions against a cargo ship in the Gulf of Mexico, breaking it in half and sinking it.

An F-15E Strike Eagle fighter launched the modified bomb, successfully striking the target by detonating a GPS-navigated bomb underneath the vessel.

They were modified to engage moving targets with a GPS-assisted Interial Navigation System.

While torpedoes are mostly used to sink enemy ships, such an attack gives away the location of the submarine, making it vulnerable to counterattack.

‘A Navy submarine has the ability to launch and destroy a ship with a single torpedo at any time, but the ‘Quicksink’ [Joint Capability Technology Demonstration] aims to develop a low-cost method of achieving torpedo-like kills from the air at a much higher rate and over a much larger area,’ said Kirk Herzog, AFRL program manager.

‘Quicksink is an answer to an urgent need to neutralise maritime threats to freedom around the world,’ said Colonel Tony Meeks, director of AFRL’s Munitions Directorate.

‘The men and women of this directorate consistently find ways to solve our nation’s greatest challenges.’

The test was accomplished through a collaborative effort with AFRL, the 780th Test Squadron of the 96th Test Wing, and the 85th Test and Evaluation Squadron of the 53rd Wing.

An AFRL statement explains: ‘AFRL scientists and engineers are developing a weapon open systems architecture, or WOSA, seeker to enable precise placement of the weapon.

Quicksink risks relatively low-cost aircraft when compared with the danger of losing a submarine to enemy retaliation after a torpedo strike.

The weapon ultimately gives US warfighters more options when in combat.

As it was released over the Gulf of Mexico, where Eglin operates the 120,000 square mile Eglin Gulf Test and Training Range, stakeholders watched the Quicksink demonstration online thanks to multiple camera feeds from aerial platforms.

A single F-15EX costs $87.7 million per aircraft, whereas a US submarine can cost up to $2.8 billion per unit, according to Aero Corner.

Warships also usually do not possess armour underneath, with a minority of vessels possessing anti-air capability.

n March 11 last year, the US Air Force launched the F-15EX Eagle II fighter. The original Eagle II programme was set to deliver 144 aircraft to replace aging F-15Cs, most of which are in the Air National Guard, but war chiefs have expanded the project.

Kingsley Field, Oregon, hosts the Air Force’s F15EX training schoolhouse which started in 2022. The first operational F-15EX squadron is to be at Portland Air National Guard Base in 2023.

The fighter jets can be deployed anywhere the US has airbases or aircraft carriers, currently including Japan, the UK, Germany, The Netherlands, Norway, Estonia, Kuwait, the UAE, Saudi  Arabia, Turkey, Niger, Djibouti, South Korea and Singapore.

The US currently has 11 aircraft carriers, with The USS George Washington is off the coast of Australia and the USS Ronald Regan is close to Japan, according to Marine vessel traffic.

The USS Harry S. Truman is off the coast of Sicily, while the rest are all within US waters.

US maritime threats come predominantly from China and Russia, with several incidents in the South-China Sea prompting the deployment of US wartime vessels.

They added that Chinese naval and air forces had tracked the ship.

The US Navy rejected the idea that the Benfold was warned away but appeared to confirm the ship was operating in the area, saying the mission reflected the US Navy’s commitment to defend freedom of navigation. The navy frequently carries out such missions in the South China Sea to challenge Chinese territorial claims