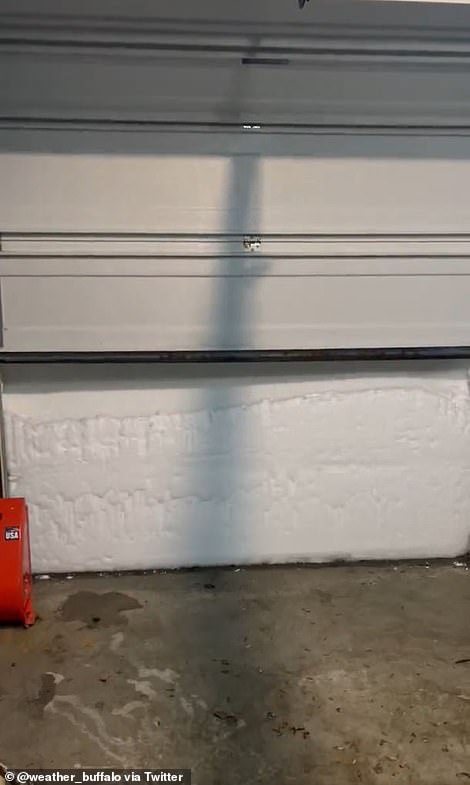 After two people died of heart attacks and a third died when their plow crashed, New York State issued a caution to citizens not to shovel snow in the upstate region, which has been pounded with 6 feet of snow.

As the storm persisted into Saturday morning, with an additional four feet of snow expected by Monday, the New York State Division of Homeland Security and Emergency Services cautioned residents to avoid overexerting themselves when shoveling snow.

‘…don’t work to the point of exhaustion,’ the department cautioned in the wake of the deaths of two unidentified Erie County men who died of heart attacks while shoveling snow.

Erie County Executive Mark Poloncarz echoed the warning in a tweet: “Please continue to avoid shoveling this very heavy, wet snow – and use caution and prevent overexertion if you must shovel today.”

WSBT reports that the Starke County Sheriff’s Department verified the death of a third victim on Friday, a snowplow driver from Etna Green, Indiana, whose vehicle skidded off the pavement and flipped.

The hardest-hit cities are in Erie County, such as Buffalo and Hamburg, where the snowfall has been enhanced by Lake Erie, which also caused lightning and thunder.

One Hamburg resident displayed the severity of the snowstorm by opening their garage door to expose 6-foot-tall snow and much greater snow mounds in their front yard.

In the midst of the blizzard, Highmark Stadium, the home of the Buffalo Bills of the National Football League, was totally covered in snow.

It was classified as “historic” by the National Weather Service for the Upstate New York region near Lake Erie, where frigid blizzard clouds interacted with electrical charges that erupted into lightning and thunder.

Officials from Erie County verified the deaths of two individuals who experienced cardiac arrest while attempting to clear the ground due to the heavy snowfall.

County Executive Mark Poloncarz said in a statement, ‘We extend our heartfelt condolences and caution everyone that this snow is extremely heavy and hazardous.’

The county remains under a state of emergency, with officials asking citizens to remain indoors and avoid travel as highways remain closed and the Buffalo International Airport cancels 57% of its flights.

“This is Saturday. There is no reason to be outside today,’ Erie County Homeland Security Commissioner Dan Neaverth Jr. said in a statement.

Due to the blizzard, the Buffalo Bills moved their Sunday home game versus Cleveland to the indoor Ford Field in Detroit.

As the stadium was covered in at least four feet of snow, the Bills announced that their Friday practice would be postponed and they would instead meet remotely.

Due to public safety concerns and an abundance of caution in light of the ongoing weather emergency in western New York, the Cleveland Browns-Buffalo Bills game scheduled for Sunday at 1 p.m. ET will be moved to Ford Field in Detroit.

As the region prepares for the storm, the decision to relocate the game from Highmark Stadium in Orchard Park, New York, was made in conjunction with the Buffalo Bills and local and state authorities.

The Bills tweeted a weather map with the message “brb going outside to shovel” on Friday afternoon. A few hours later, they posted images of a snow-covered Highmark Stadium.

The National Weather Service has cautioned that travel during this period will be extremely difficult to impossible due to dangerous weather.

The Buffalo region, which has already received more than 60 inches of snow, is projected to receive the storm’s heaviest snowfall, a forecast not seen in more than 20 years.

The heaviest three-day snowfall in the city was 56.1 inches in December 2001.

Other regions impacted by the storm include portions of Michigan’s Upper Peninsula and western Lower Peninsula, where gusty winds and heavy snow will create near-zero visibility and hazardous travel conditions.

»Upstate New York might get 4ft more snow by Monday«