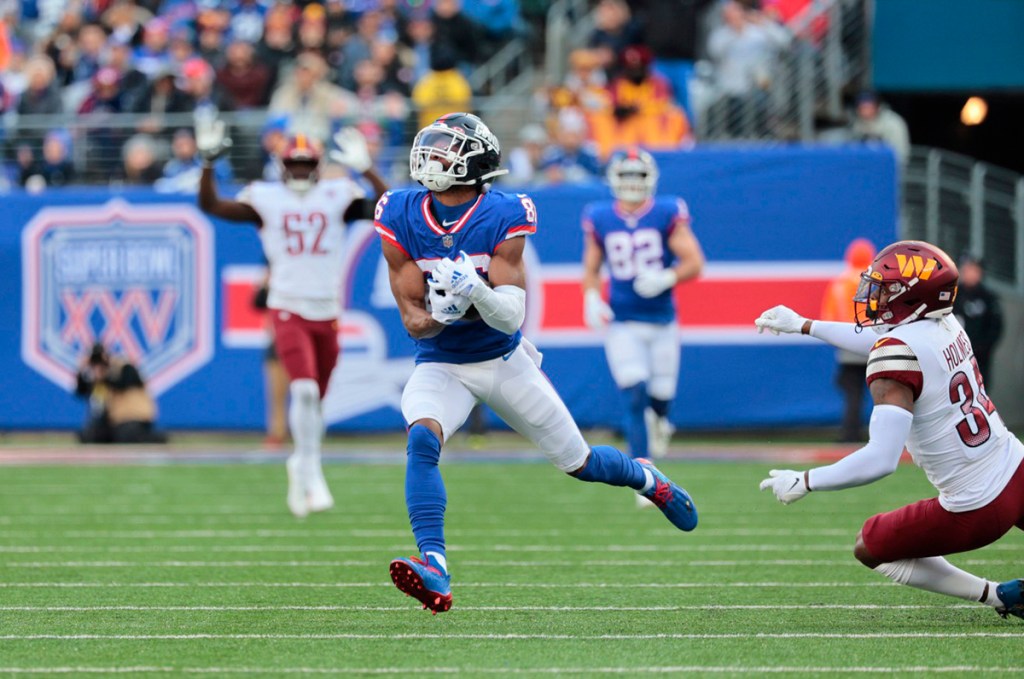 In the days preceding up to Sunday’s 20-20 overtime draw with the Commanders at MetLife Stadium, Darius Slayton was ill. Despite his sickness, he was able to play, and his six receptions for 90 yards led the Giants. He produced one of the day’s few offensive highlights for his side, a soaring catch of 55 yards in the second quarter that set up a score by Saquon Barkley.

Slayton also failed to make a play that may have resulted in a victory for the Giants.

With 1:45 remained in regulation, the Giants received the ball and were virtually in position to try a game-winning field goal. Daniel Jones searched for Slayton in the deep left corner, but Slayton was already sprinting free. He rushed for the ball, briefly held it in his hands, but lost control when it slipped through his body and fell from his grasp as he hit the ground.

“I had it, but I lost it somewhere on the way down,” Slayton claimed. “I was unable to secure it. I must discover a means to bring it in.”

In the second quarter, Slayton was able to make a 55-yard reception despite shedding defender Christian Holmes and then out-battling Darrick Forrest.

Slayton stated, “As usual, DJ gave me the ball to make a play on.”

Slayton stated that he had to focus on staying hydrated during the week and the game.

Graham Gano’s 58-yard field goal attempt at the end of extra time was unsuccessful. Given the conditions, he understood from his pregame practice that such a long kick was beyond his range.

Gano once defeated the Giants with a 63-yard field goal while playing for the Panthers. “In warm-ups off the holder, I kicked a 55-yard field goal that ricocheted in off the crossbar,” he explained. “Ball wasn’t moving too far in that direction. It is December, and the wind is blowing. I wish it had traveled farther, but I struck the ball well and have no regrets. Simply lacked the necessary space.”

Graham Gano reacts to his missed field goal with no time remaining.

Azeez Ojulari played for the first time since Week 4 and was relentless in a limited role off the bench, recording one sack and two quarterback hits. … The Giants played the most of the second half and overtime without DT Leonard Williams due to a neck injury. … LB Tae Crowder, who was a starter early in the season but is now restricted to special teams, tweeted “Free Me” after the game. … Taylor Heinicke, quarterback of the Commanders, stated that the tie was “quite odd.” This is the sole nice aspect of the game.

Odell Beckham Jr. will visit the Cowboys on Monday after meeting with the Giants and Bills last week. NFL Network reports that Beckham has not received a contract offer as of yet.

There were a few unexpected players among the Giants’ seven inactives. Darnay Holmes, who played the slot corner position in eleven games this season, was not in uniform. Holmes, according to coach Brian Daboll, is suffering from a shoulder ailment. TE Lawrence Cager, a starter, was sidelined as well, but Daniel Bellinger returned from a four-game absence due to an eye issue. Kenny Golladay, who became unwell late in the week, was not active for Sunday’s game. … DE Chase Young, who was rated as doubtful and was recovering from ACL surgery, was held out by the Commanders.

Taylor Heinicke, quarterback of the Commanders, passed for 275 yards and two touchdowns. On the 90-yard touchdown drive that tied the game, his scrambling fourth-and-4 throw was the longest of his 27 completions on 41 attempts.

Both head coaches, Brian Daboll and Ron Rivera, opted for a tie in overtime, with the Giants punting on fourth-and-3 and the Redskins content to run out the clock on their lone possession, which was backed up against the end zone.

Azeez Ojulari recorded two quarterback hits for the Giants, including a strip-sack and fumble recovery that set up the Giants’ lone second-half score.

Graham Gano missed 8 field goals out of 90 tries during his three years with the Giants, but the eighth effort was a game-winning 58-yarder.

“It was so haphazard, you didn’t even know it was over when you were simply gazing about. It was like, “Okay, it’s finished, you can all leave now.” And we’ve just left.”

― Kayvon Thibodeaux, about the sensation of a tie