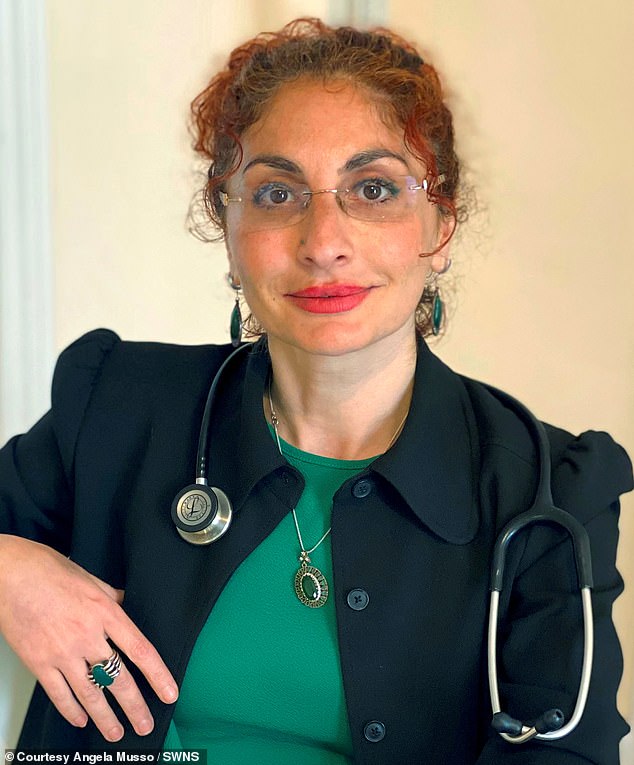 A non-immunized general practitioner who refused to wear a face mask during the height of the Covid-19 outbreak is contesting her dismissal from a doctor’s office.

Angela Musso, 46, worked at a Suffolk medical practice for two days before being fired for failing to wear a face mask when interacting with patients.

During this period, many patients complained that she instructed them to remove their masks and close the windows during appointments.

Dr. Musso is suing the Cutlers Hill, Halesworth clinic in an employment tribunal, claiming that her firing was discriminatory.

She alleges that she was unable to wear a mask at the practice where she worked in April 2021 due to anxiety following an accident, but the practice stated that this was none of their concern.

Angela Musso, 46, was unable to wear a mask at the general practitioner’s office where she worked due to fear following an accident.

“I’m bringing them to court because it was so stressful,” Dr. Musso said.

As a physician, they should be able to comprehend why I am being treated this way.

She stated on her website, “During my self-represented court hearings, I chose to change careers.”

Here, I am attempting new things where I may be optimistic and authentic, in peace and with trust.

Dr. Musso has since begun a career as a fashion model and in “holistic medicine,” stating that she is “experimenting with new things.”

Dr. Musso thinks that by going to court, she would be able to “explain her side of the story” after becoming “fed up with being bullied.”

She responded to patients’ complaints by stating, “I am a physician who swore to do no harm.”

“A pregnant woman was unable to breathe, so I instructed her to remove her mask.” It is up to the patient to select how they will use their masks.’

Dr. Musso’s social media accounts feature a photo of her wearing a mask with the phrase “government-mandated muzzle”

Additionally, there is a video in which she states that she discouraged patients from receiving the Covid-19 vaccine due to its potential adverse effects.

She refused to get vaccinated for Covid-19 due to her doubts regarding the vaccine’s rapid production, but she was properly immunized against all other diseases.

However, no safety standards were overlooked throughout the development of the Covid-19 vaccines, and the Medicines and Healthcare products Regulatory Agency approved the UK vaccines.

According to Dr. Musso, there is little proof that the Covid immunizations prevent the spread of the disease. She also discouraged patients from receiving the vaccine in a video.

When asked if she believed that having an unvaccinated general practitioner would hurt her patients, she responded, “There is insufficient proof that vaccination prevents the spread of Covid-19.”

According to a fact-checking website, although the effectiveness of all Covid-19 vaccinations declines over time, they can be up to 95% effective at preventing illness in those over the age of 16.

She continued, “I have over 20 years of experience and have worked as a general practitioner in New Zealand and Australia, but Norwich is now my second home.”

“I became a general practitioner because I want to serve people,”

Separate claims against the practice, notably that she was subjected to blatant discrimination, harassment, and victimization, have been dismissed.

The employment judge Liz Ord determined that these claims had “no realistic chance” of success.

The court will hear arguments on Monday, November 28.

Dr. Musso was terminated from her position at Cutlers Hill Surgery in Halesworth in April 2021.

WHAT HAVE STUDIES REVEALED IN REGARDS TO FACE MASK AND COVID?

Diverse studies have examined the efficacy of various masks and face coverings in protecting against coronavirus, but experts and politicians largely agree that some protection is preferable to none.

In the United Kingdom, facial coverings became necessary for public transportation in June, followed by shops and other indoor venues in July.

Here is what research has revealed so far concerning the effectiveness of masks:

Researchers at Boston University in the United States discovered that wearing face masks effectively prevents the transmission of coronavirus.

The study, published in the journal Lancet Digital Health, indicated that a 10% increase in self-reported mask use is related with a threefold increase in the likelihood of keeping the R number – the number of individuals infected by a person with coronavirus – below 1.

Ben Rader of Boston Children’s Hospital and Boston University, co-author of the study, stated, “An significant result of this research is that mask wearing is not a substitute for physical separation.”

Scientists at New Mexico State University in the United States discovered that wearing a fabric mask would drastically limit the number of coronavirus-infected droplets the user would be exposed to.

Dr. Krishna Kota, an associate professor at the university who led the research, stated, “Wearing a mask will provide a susceptible individual with substantial but not complete protection.”

The study indicated that even though all masks prevented at least 95% of cough and sneeze droplets, there was still a risk of disease transmission.

A mask is always preferable to nothing (DECEMBER 2020)

The University of Massachusetts Lowell and California Baptist University in the United States discovered that a worn three-layer surgical mask can minimize by two-thirds the quantity of tiny droplets emitted into the air.

According to co-author Dr. Jinxiang Xi, it is natural to believe that wearing a mask, whether new or old, is always preferable to doing nothing.

A study conducted by the Copenhagen Hospital in Denmark indicated that face masks may only provide little protection against Covid infection.

Researchers discovered that there was no statistically significant difference between the number of people who contracted the virus in groups wearing and not wearing masks in public.

In April and May, when Danish authorities did not encourage wearing facial covers, the study was conducted.

According to research conducted at Edinburgh University in Scotland, cotton face masks effectively reduce the number of droplets distributed by coughing and sneezing.

The results indicate that a person standing two meters away from a coughing individual without a mask is exposed to 10,000 times more droplets than a person standing half a metre away wearing a standard single-layer mask.

Professor Paul Digard of the Roslin Institute at the University of Edinburgh stated, “The basic lesson from our research is that face masks work.”

Wearing a facial covering will lessen the likelihood that an accidentally infected person may transmit the infection.

Duke University in North Carolina, United States, discovered that N95 masks are the most effective at preventing the spread of Covid-19.

The study, which was published in the journal Science Advances, investigated fourteen forms of facial coverings.

Dr. Eric Westman, co-author, stated, “If everyone donned a mask, we could prevent up to 99 percent of these droplets from reaching someone else.”

In the absence of a vaccine or antiviral medication, this is the only established method of protecting oneself and others.

A study released by the University of Oxford on March 30 of last year indicated that surgical face masks are just as effective as N95 respirators in avoiding respiratory infections for doctors, nurses, and other health care professionals.

N95 respirators are made of thick, densely woven and molded material that fits snugly over the face and can block 95% of all airborne particles, whereas surgical masks are thinner, more porous, and fit more loosely.

The Oxford analysis of previous studies, which has not yet been peer-reviewed, concluded that surgical masks are beneficial, but any face mask is only as effective as other health and hygiene measures.