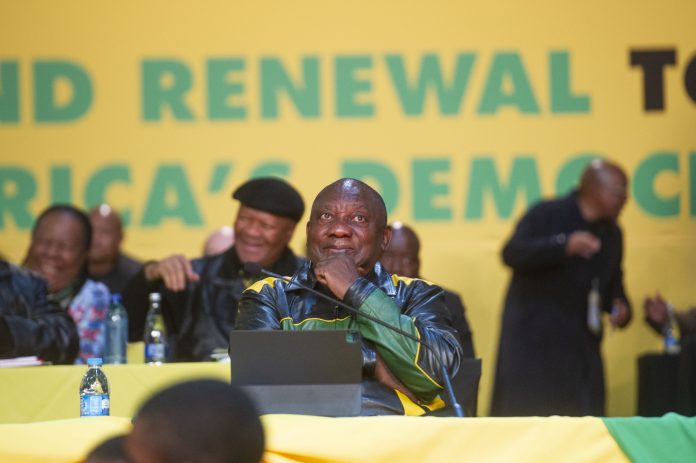 Friday at the Nasrec Expo Centre outside Soweto, delegates from KwaZulu-Natal burst out in song and heckled President Cyril Ramaphosa during the opening of the ANC electoral conference.

Despite his appeals for calm, several delegates proceeded to knock on tables, demanding and pledging that he would not be reelected as ANC president.

The delegates, who sang Wenzeni uZuma, RamaPhala Awuphendule (What has Zuma done, explain Ramaphosa), made it obvious that they want Ramaphosa to be replaced by former health minister Zweli Mkhize, who is also running for ANC president.

“I would want to request that you refrain from singing. Ramaphosa appealed to the throng, “I would like for all of you to respect this meeting.”

In the midst of the ruckus, Gwede Mantashe, the chairman of the African National Congress (ANC), urged security to be prepared for any scenario. Prior to the start of the conference, a throng from KwaZulu-Natal disobeyed Mantashe’s directives and the provincial ANC leadership was called upon to calm them down.

The chairperson of KwaZulu-Natal, Siboniso Duma, intervened and reasoned with the delegates from his province who were determined to disrupt the presentation of Ramaphosa’s political report by the ruling party.

Earlier in December, former president Jacob Zuma had urged delegates to prevent Ramaphosa from delivering his report, prompting the disruption.

According to KwaZulu-Natal-based political analyst Xolani Dube, Zuma’s move to push branches to revolt and not accept any reports at the elective conference is self-serving and indicative of a leader who has lost his political strategy.

Dube stated at the time in Sunday World that Zuma should instead utilize his energies to combat the neo-liberal policies that his party has adopted over the years.

“Zuma himself is the issue. Dube predicted that nothing would occur and that the conference will proceed as scheduled since any disruption or disorder would be a victory for [President Cyril] Ramaphosa.

Early on Friday morning, hours prior to the opening of the Nasrec conference, Ramaphosa rejected Zuma’s proposal to initiate a private prosecution against him.

According to the Jacob G Zuma Foundation, the former president is suing his successor in related to his case against state prosecutor Billy Downer and Media 24 journalist Karyn Maughan, whom he claims illegally disclosed his medical information.

In his corruption case, the foundation stated that Ramaphosa was “an accessory after the fact to the offences committed by, among others, lawyer Downer, namely breaking the terms of the NPA Act.”

The Presidency, however, rejected the allegations, arguing that Zuma is misusing judicial processes and that the charges are “frivolous and unsubstantiated.”

Ramaphosa was jeered upon his arrival at the KwaZulu-Natal party’s elective conference in July. Despite the hostile reception, he eventually addressed the throng at the Olive Convention Centre in Durban.

This is an evolving tale…