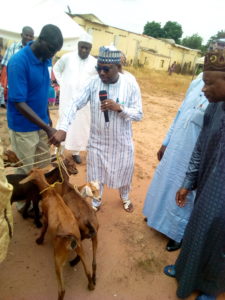 Speaking at the distribution ceremony, the state commissioner of Agriculture Alhaji Umar Daware challenged the benefiting farmers not sell the goats but bread them to enable them improve their live-hood.

He explained that Adamawa state was among seven States in the country that benefited from the intervention program.

Alhaji Umar Daware promised that more intervention programs will be provided to local farmers in the state.

In his remark, the Permanent Secretary, Ministry of Agriculture Hajiya Zainab Umar Adamu called on beneficiaries to make good use of the goats, and step down the knowledge acquired during their training to other farmers in their various communities.

Earlier in his welcome address, the Program Manager Adamawa state Agricultural Development Program Malam Adamu Ma’azu said the aims of program is providing livelihood empowerment to farmers by teaching them on local preparation of balance diet for their animals for greater productivity.

He explained that this is the second phase of the distribution of the goats and start-up package which is free of charge.

Speaking, some of the beneficiaries of the program Mr Alfred Majamo and Mrs Happy Elson expressed appreciation to the Adamawa state government and UNDP for facilitating the program and promised to make good use of the goats.