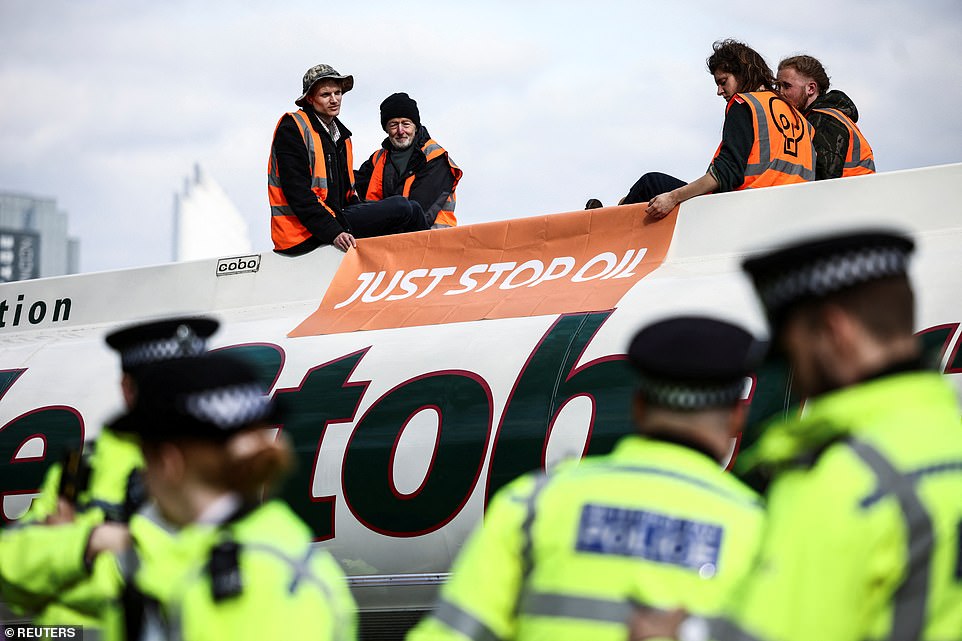 Boris Johnson warned he cannot protect Brits from cost-of-living misery today as he unveiled Queen’s Speech measures to get back on track after Partygate and disastrous local elections – including a crackdown on eco ‘hooligans’, a Levelling Up drive and a Brexit red tape bonfire.

As the legislative agenda for the new Parliament was announced, the PM said that the government will do ‘whatever we can to ease the burdens people are grappling with’.

But despite growing demands for action as inflation surges towards 10 per cent and the economy stalls, Mr Johnson pointed to the existing £22billion package of help, and insisted he would make long-term investments rather than try to ease the immediate pain.

The approach was underlined by the absence of any fresh measures in the package of proposed laws – although minister have carefully refused to rule out an emergency Budget before the Autumn.

Instead the Parliamentary session – being kicked off by Prince Charles rather than the Queen for the first time in six decades as she is suffering ‘mobility issues’ – focuses on broad reforms with a smattering of crowd-pleasing policies such as bolstering police powers to tackle disruptive protests.

Schools and higher education are being overhauled to help the post-Covid recovery, while owners of unused second homes are expected to be punished, and locals given more power over housing developments.

There is also action to revive high streets, a shake-up to create Great British Railways, and a vehicle for the controversial privatisation of Channel 4 – as well as steps to ensure ‘woke’ attitudes do not hamper free speech at universities.

In his introduction to the programme, Mr Johnson said: ‘While we can be proud of what we have achieved, the economic aftershocks of COVID-19 and the biggest war in Europe since 1945 mean huge disruptions to the global economy, with people in every major country facing real pressures in the cost of living. No country is immune and no government can realistically shield everyone from the impact.

‘It is right that we continue doing whatever we can to ease the burdens people are grappling with now, supporting the hardest hit with £22 billion of help to address the cost of living and cutting hundreds of pounds off household bills.

‘But we must also remember that for every pound of taxpayer’s money we spend on reducing bills now, it is a pound we are not investing in bringing down bills and prices over the longer term.

‘And that if anything, this moment makes clear our best remedy lies in urgently delivering on our mission to turbo charge the economy, create jobs and spread opportunity across the country.’

Mr Johnson and Sir Keir have clashed bitterly over Partygate, Beergate and other issues – but appeared to share a joke as they walked from the Commons chamber to hear the speech in the Lords.

Mr Johnson apparently quipped in a reference to the furore engulfing the Labour leader: ‘Did you have a good weekend?’

The Queen, 96, pulled out of the ceremonial occasion – when she spells out the Government’s legislative programme for the forthcoming parliamentary session – as she continued to experience ‘episodic mobility problems’.

In the Queen’s absence, Charles took on the head of state’s major constitutional duty, in a move which will be interpreted as a significant shift in his responsibilities as a king-in-waiting.

The Duke of Cambridge, also a future monarch, attended the State Opening, the first time he has done so, with the royal function of opening a new parliament delegated to both Charles and William by the Queen.

The monarch is understood to have watched proceedings on television, and will have her regular audience with the PM tomorrow.

Aside from the pomp and ceremony, the Speech marks the start of a critical phase for Mr Johnson as he looks to restore his political fortunes.

The PM has so far clung on despite Partygate and the dismal local election results, but the Tories are trailing Labour in the polls and the success of these policies are likely to decide who secures power at the next election.

In comments ahead of the speech, Mr Johnson delivered a strong hint that he has abandoned the idea of calling an early election as storm clouds gather over the UK economy, saying the programme will need the full two years to complete.

The Queen’s Speech promises to ‘grow and strengthen the economy and help ease the cost-of-living crisis for families’.

But the package of legislation merely reiterates measures that have already been announced – and decried by critics as not going far enough.

In his introduction, Mr Johnson said the government will do ‘whatever we can to ease the burdens people are grappling with’.

But he added: ‘We must also remember that for every pound of taxpayer’s money we spend on reducing bills now, it is a pound we are not investing in bringing down bills and prices over the longer term. And that if anything, this moment makes clear our best remedy lies in urgently delivering on our mission to turbo charge the economy, create jobs and spread opportunity across the country.’

The briefing notes highlight that the government has provided £22billion of support to families in 2022-23, and ‘will not hesitate to take further steps to support households if needed’.

Officials stressed that helping people into work was the ‘best approach’ to easing the misery, pointing to education and training policies.

The only nod to soaring energy bills is the Energy Security Bill, which the government says will ‘deliver the transition to cheaper, cleaner and more secure energy’.

However, there has been mounting speculation that Rishi Sunak could bring forward an emergency Budget to take the edge off inflation – which is on track to reach 10 per cent in the coming months.

There have been calls for measures such as suspending VAT on heating bills and making the £200 loan a grant.

Police will be given powers to stop eco ‘hooligans’ blocking roads and inflicting misery on motorists, under plans announced today.

A Public Order Bill to tackle disruptive action by groups such as Extinction Rebellion was unveiled in the Queen’s Speech.

The Government had attempted to bring in the measures in January, but they were blocked by Labour and others in the House of Lords

A criminal offence of ‘locking on’ will be created to prevent activists chaining themselves to buildings, vehicles and other protesters.

It will carry a maximum penalty of six months and an unlimited fine.

Stop and search powers will allow police to detain campaigners carrying bike locks and other equipment designed to make themselves difficult to remove.

A new offence will also be introduced to specifically ban the obstruction of key national infrastructure such as airports, railways and newspaper printing presses, which will be punishable by up to 12 months in prison and an unlimited fine.

It will also be illegal to obstruct major transport works, including disrupting the construction or maintenance of projects such as HS2.

Groups such as Extinction Rebellion, Insulate Britain and Just Stop Oil have used guerrilla tactics to wreak havoc in recent years – stopping people getting to work and costing taxpayers millions because of the mammoth police operations.

He told BBC Breakfast: ‘We have seen a number of very, very prolific, persistent offenders who decide to just flagrantly ignore the courts and so we’ll be bringing in a new serious disruption prevention order which we can place on them as individuals to deter them, if you like, from this kind of hooligan way of protesting.

‘We believe that protest is fundamental to our democracy but it has to be balanced against the rights of others to go about their business, and indeed keeping us all safe.

‘I’m afraid some of the tactics we’ve seen recently haven’t done that.’

Home Secretary Priti Patel said: ‘The law-abiding, responsible majority have had enough of antisocial, disruptive protests carried out by a self-indulgent minority who seem to revel in causing mayhem and misery for the rest of us.

‘The Public Order Bill will give the police the powers they need to clamp down on this outrageous behaviour and ensure the British public can go about their lives without disruption.’

A ‘super seven’ of post-Brexit Bills is designed to exploit the benefits of leaving the EU, from slashing red tape to bolstering protection for animals.

The Tories hope the new agenda can ease the cost-of-living crisis and deliver a ‘Brexit dividend’ in time for the next general election.

The package pledges to ‘end the supremacy of European law’, saying that reducing bureaucracy in areas such as data handling can save businesses £1billion.

The raft of legislation includes the Brexit Freedoms Bill, which the government says will ensure future regulation is ‘proportionate and created in collaboration with business to help spur economic growth’.

Restrictions in areas such as gene editing are being loosened, with officials saying it has ‘the potential to increase disease resistance in crops, which can reduce pesticide use, lower costs to farmers and increase food production’.

Mr Johnson has said the overhaul will allow the UK to ‘thrive as a modern, dynamic and independent country’.

A crackdown on under-used holiday home is flagged in the Queen’s Speech.

The Levelling Up and Regeneration Bill paves the way for councils to get discretionary powers to double council tax on second homes unless they are either regularly used or let out by their owners for at least 70 days per year.

Vacant property has become a festering issue in prime beauty spots, with locals frustrated at soaring prices preventing permanent residents getting on the housing ladder.

Government sources have said wealthy owners who leave homes unused will be expected to contribute to ‘crucial services in a way that can really benefit the whole community and boost levelling up’. One option would be to deploy the revenue to cut council tax.

Properties that are not even furnished will face a 100 per cent increase in council tax after 12 months, rather than the current two years.

The same Bill will include measures to revive England’s high streets, with compulsory rental auctions to ensure landlords make shops that have been vacant for more than a year available to prospective tenants.

Authorities will also be given greater powers to use compulsory purchase orders to deliver housing, regeneration schemes and infrastructure.

Local residents are set to get rights to be consulted on ‘design codes’ spelling out the standards that housing developments must meet.

The move is part of a new pared-back approach to planning reforms, intended to soothe Tory backbench alarm that changes will hit them in the shires.

Ministers will look at how the planning inspectorate handles targets on local housing requirements, with greenbelt and areas of natural beauty no longer forced to meet ‘unrealistic’ goals as long as they produce a plausible plan.