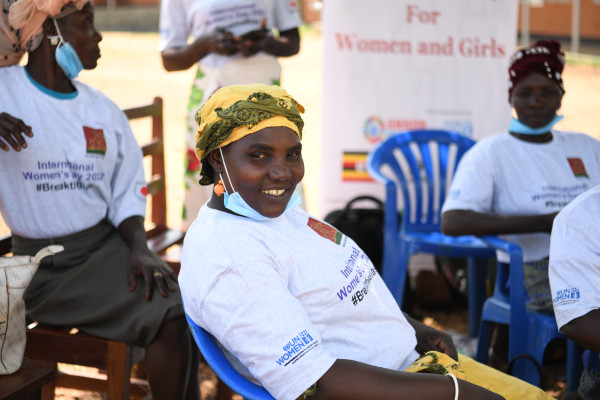 UN Women supports implementing partners TPO Uganda and Refugee Law Project, to support women and girls who were forced to flee conflict. At Bidi Bidi settlement women benefiting from Refugee Law Project’s “English for Adults” shared their inspirational stories; their success was made possible by psychosocial support offered by TPO Uganda. These interventions are made possible by the generous support of the Embassy of Sweden in Uganda, the Royal Norwegian Embassy and the EU-UN Global Spotlight Initiative.

Omugo refugee settlement is an extension of Rhino settlement, based in Terego District in the northern Uganda, with capacity to host 43,000 refugees from neighboring South Sudan. Omugo is the latest settlement joining the likes of Bidi Bidi in the West Nile region. At present Bidi Bidi camp hosts 214,000 refugees who were forced to flee, the majority of them women and children. UN Women is supporting multiple interventions for women and girls in refugee camps. Two of these important programmes are the Refugee Law Project’s “English for Adults” programme and TPO Uganda’s partnership with UN Women, implementing a series of mental health and psychosocial support (MHPSS) and livelihood interventions to support refugees and host communities improve their wellbeing since 2016.

The support provided by TPO Uganda has been labelled “lifesaving” by the women and men who benefited from it. One such woman is Betty Firika (30), a mother of four children who left South Sudan in August 2021 because of the war. She and her husband and three young children fled on foot. The four-day journey to the border was extremely traumatic for Betty, who was raped by rebels.

“When I got here, I told the UN Women social worker what happened and I was taken for examination. They gave me medication for the pain and over those next weeks I went through 10 sessions. The sessions helped me a lot, from how I used to be and how I used to think about it a lot. Now I don’t think much about that day,” shares Firika.

Through the TPO project, UN Women helps South Sudanese refugees and host communities to access psychosocial support and trauma care. In addition, the project provides livelihoods support to selected beneficiaries and creates referral linkages to other services. The project is aimed at strengthening and sustaining recovery and social functioning for sexual and gender-based violence survivors. The sessions provided by TPO Uganda help to restore confidence in survivors. Betty’s sessions helped her to communicate with her children without anger.

Michael Muwairwa, Director of Knowledge Development and Innovation at TPO Uganda spoke about MPHSS as a lifesaving service for refugees:  “Refugees experience higher rates of mental health and psychosocial difficulties, including disorders such as anxiety, depression, and post-traumatic stress disorder due to the difficult experiences faced at home, in transit and in the settlements. MPHSS is a lifesaving service for refugees enabling them to adjust and cope positively with life, become more active and productive.”

Molly Ajonye (31) is a successful graduate of the English for Adults (EFA) course under the LEAP Programme implemented by Refugee Law Project with UN Women, jointly supported by the Embassies of Sweden and Norway. With funding from the Royal Norwegian Embassy, over 1,815 (1,342 women, 473 men) enrolled for EFA. Molly participated in interpreters training that was conducted in August 2019. Following 18 months of studying English, she acquired a certificate for interpretation from English to Arabic and the local South Sudanese language Bare.  Molly is looking forward to taking on a leadership position within the refugee settlement, thanks to her strong language capabilities. This empowerment training was made possible thanks to the complementary support Molly received from TPO’s psychosocial support.

Michael (TPO Uganda) spoke about how the economic empowerment of refugees links to efforts to end violence against women in the settlements: “TPO Uganda follows a systematic process where beneficiaries are first enrolled and provided with psychosocial support through cognitive behavioural therapy. Following this they are provided livelihood opportunities that are then monitored and followed up. Economic empowerment after therapy enables beneficiaries to sustain therapy outcomes and become more resilient. Livelihood options reduce their risk of participation in risky behaviours such as sexual exploitation and abuse.”

Rose Mary Tiep, a beneficiary of psychosocial support at Omugo II settlement shared her appreciation for the sessions, crediting them with her ability to manage a business.

Maka Joyce, introducing herself as “Young Queen”, described herself a musical composer. She benefitted from the EFA programme and uses her newfound English to write songs in collaboration with other women in her community. English complements the psychosocial support they received and enables them to get together as a group and write songs, a form of continued therapy