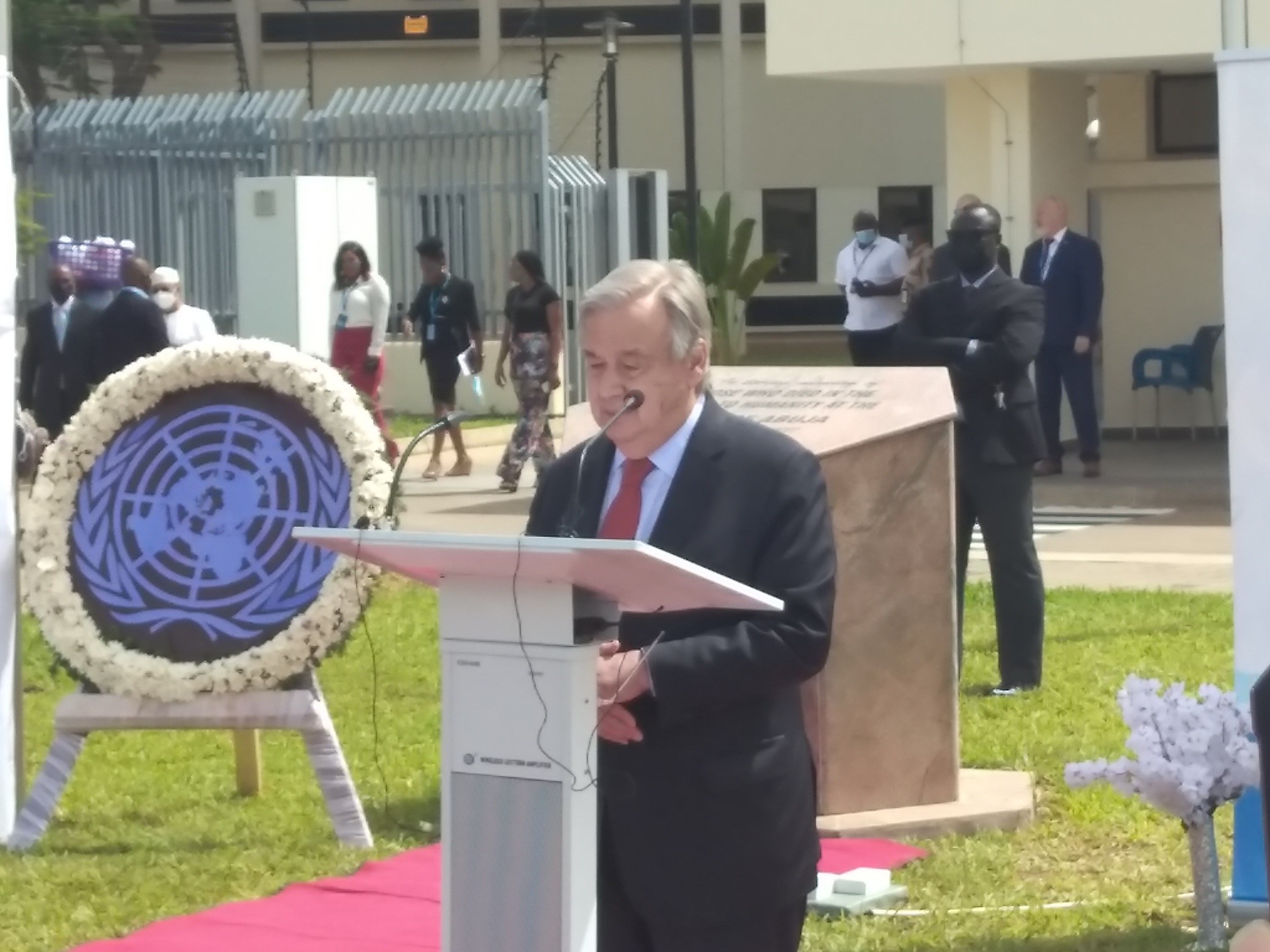 The UN Secretary-General, Antonio Guterres, has reaffirmed United Nations commitment to supporting Nigeria for the good of the citizenry.

The UN scribe made this known at the wreath-laying ceremony of the twenty three victims that died in the bomb attack in the UN House in Abuja, on August 26th, 2011.

Speaking at the wreath laying ceremony, the United Nations Secretary-General, described the attack that resulted in the deaths of  twenty three UN employees and partners and injury to sixty others as tragic.

He described the bomb blast victims as heroes, who served Nigerians throughout the organisation operations.

They were also mothers and fathers, sons and daughters, brothers and sisters and cherished friends, all but one were Nigerian nationals; today we mark their tragic death.”

Mr. Guterres, further reaffirmed UN’s commitment in supporting a peaceful Nigeria. “We celebrate the love and joy they brought to their colleagues and loved ones and inspiration they provided. Today we stand in solidarity with the families of the victims, as well as women and men who work at the UN House every day, to support and serve Nigerians. We stand in solidarity with all Nigerians. In our victim support approach, every perpetrator must be held accountable. We remain steadfast in our commitment to supporting a peaceful Nigeria for all Nigerians”.

The UN Secretary-General, Antonio Guterres at the wreath laying ceremony for the victims killed at the UN House in AbujaAlso speaking, the Catholic Archbishop Emeritus of Abuja, John Cardinal Onaiyekan said the meeting with the UN Secretary General on religious leadership in Nigeria, shows that the world has not lost hope in Nigeria.

“Religious leaders have a duty to have good examination of conscience; what are we doing, that we would do better? What can we do to make our followers better? These are issues we discussed. We referred to Easter and end of Ramadan, whereby religious festivities merged by providence.

Christians and Muslims were kept in mood of religious reflection about ways to live better lives” Onaiyekan said.
Women in politics

Nigeria’s Minister of Women Affairs, Pauline Tallen, explained that the outcome of closed-door women group meeting with Guterres, focused on women’s participation in politics, gender-based violence, inclusion of women in decision making and need for global treaty to end violence against women, as well as UN’s support for Nigerian women.
Tallen commended Guterres for his large heart and support for women and children,.

“Guterres’ visit to Nigeria gives us hope, we know that he will lend his voice to all issues affecting women such as gender-based violence, early marriage and lack of implementation of some of our laws”.

According to the National Women Leader of the All Progressives Congress (APC), Dr Betty Edu, the meeting was to advocate rights of Nigerian women participation in politics.

“Beyond this, we are working to see that we ensure women scale through the primaries into the main election and come out as elected winners at different levels. Today the message was clear that for Nigeria to achieve SDGs, it is important for political parties to support the country achieve SDG and its policies. They must ensure women are mainstreamed and prioritised as we go into the 2023 election”.

The UN Secretary General also met behind closed doors with members of the diplomatic community as well as top government officials. He visited Borno state where he met with the Governor of Borno State Babagana Zulum and also inspected the UN stabilization fund in Banki area of the state.

Mr Guterres had earlier visited Senegal and Niger Republic all in the West African region, and Nigeria is the third country in the region to be officially visited since he took over the leadership of the United Nations.