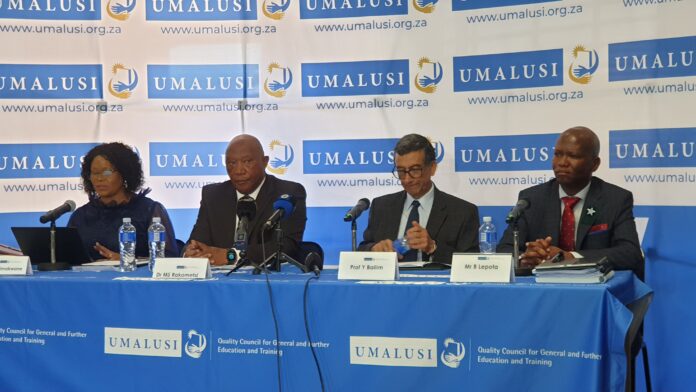 The Council for Quality Assurance in General and Further Education and Training (Umalusi) announced on Monday, as it approved the release of the national examinations results, that there were no matric exam paper leaks in 2022 and the recorded irregularities were not systemic but rather group or individual-based.

The chief executive officer, Dr. Mafu Rakometsi, stated that the quality assurance committee is gravely concerned about the recorded occurrences of examination irregularities.

“According to the reports received from various assessment bodies, various forms of exam cheating were discovered in certain examination centers,” he stated.

“These include candidates found in possession of crib notes and/or cellphones, sharing of answers via WhatsApp groups, the discovery of impostors in examination rooms, different handwriting on some answer scripts, etc.”

Rakometsi elaborated that the anomalies occurred throughout the nation, stressing the WhatsApp group cheating scam as a new occurrence.

Depending on the severity of the offenses, various fines have been imposed on the concerned candidates, including the nullification of their results and a ban from taking the examination for one or two examination cycles.

In cases where investigations are still underway, candidates’ results would be blocked, according to Rakometsi.

Professor Yunus Ballim, the chairman of Umalusi, presented his approval statement for the examination results to the media on Monday, stating that the quality assurance body is happy that the examinations comply with norms and regulations.

“The irregularities identified during the writing and grading of the examinations were not systematic and, as a result, did not compromise the overall credibility and integrity of the November 2022 NSC,” stated Ballim.

“With regard to observed anomalies, the DBE is expected to block the results of all candidates implicated in irregularities, including those implicated in alleged acts of dishonesty, until the outcome of DBE investigations and verification by Umalusi. Particular focus should be placed on reoccurring instances of noncompliance.

Regarding the controversial unsolvable question on the Mathematics paper two test, Ballim stated that the panel’s investigation determined that the error in question 5.1 arose during the stage of editing and typesetting.

“The error in Mathematics paper two from November 2022 happened at the end of the internal and external moderation, language editing, and typesetting processes.

“Therefore, no points were awarded for question 5.1 [seven points], decreasing the overall score from 150 to 143 by seven points. All candidates were graded on a scale of 143 points, which was then transformed to a score out of 150 points, according to Ballim.

Rakometsi stated that Umalusi and the department bear entire responsibility for the inaccuracy on the Mathematics exam.

Umalusi announced the results of the assessments of the National Senior Certificate (NSC) by the DBE, Independent Examinations Board (IEB), and South African Comprehensive Assessment Institute (Sacai), as well as the National Certificate Vocational (NCV: L2-L4) and Nated Report 190/191 (N2-N3) assessed by the Department of Higher Education and Training (DHET), and the General Education and Training Certificate: Adult Basic Education (GETC: ABET) – assessed by the DHE

The tests were taken by 1,222,652 individuals who had registered for the four qualifications with four assessment organisations.

“The NSC is responsible for 940 366 of these applicants, followed by the NC(V) with 166 184 candidates. Rakometsi stated that the remainder is comprised of applicants who took the Nated (N2-N3) and GETC tests.

»Umalusi reports that no matric test paper leaks occurred in 2022«