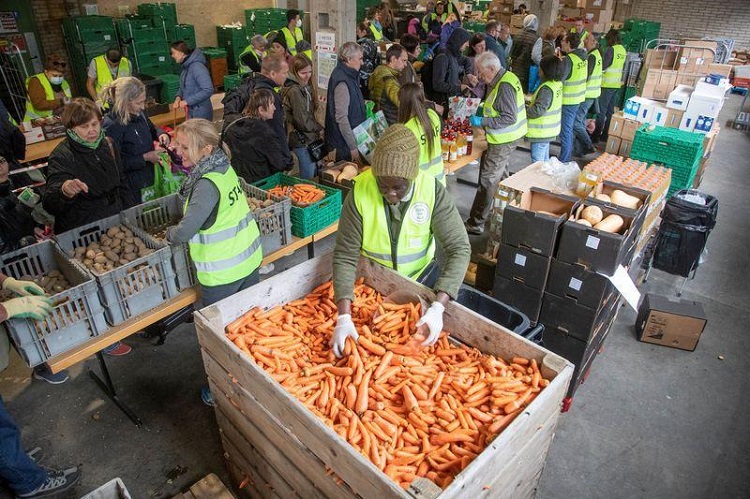 Hundreds of Ukrainians lined up for food handouts in central Zurich on Saturday as wealthy Switzerland struggles to cope with the arrival of around 40,000 refugees since Russia invaded Ukraine in late February.

Refugees in official accommodation receive some financial support from the state, although this is often not enough to live on in a country where the cost of living is among the highest in the world.

Those staying with private host families; around half the arrivals, according to the authorities are falling through the cracks of the welfare system altogether.

Charities in Switzerland say many Ukrainians fleeing the Russian invasion were turning to them for food, clothing and medical treatment, as was evident from the long line outside a Zurich charity’s food bank on Saturday.

Among people lined up outside an Essen fuer Alle (Food for All) food distribution centre along railroad tracks was Kristina and her 7-year-old daughter who arrived from Kyiv on March 3 to stay with a Ukrainian family friend in Zurich.

“We come here to take food because we need it,” said Kristina, 42, who did not give her family name. “Our volunteer (host) cannot give food every time. She’s tired and she also doesn’t have too much money.”

Ariane Stocklin of Christian aid project incontro said that hers is a common story.
“Some refugees stay with families who can no longer pay for their food. Others are in asylum centres, where the food is insufficient. We see a lot of demand,” Stocklin said.
Even before the Ukraine crisis, welfare payments to refugees were not enough to live on in some areas of Switzerland.

Voters in Zurich decided in 2017 to lower welfare payments to refugees to around 500 Swiss francs ($522) per month, 30% below standard social welfare levels.

However, there was no procedure for aiding refugees staying with host families, she said.

Gaby Szoelloesy, who coordinates cantonal social welfare departments, apologised this week to host families who feel left in the lurch.

“But it is simply very, very difficult if we don’t even know of the host family’s commitment because it did not go via official channels,” she said.

While the government has taken the unusual step of allowing Ukrainian refugees to apply for temporary residency and work permits, this does little to address the present needs of the struggling refugees staying with host families.
One Ukrainian refugee named Anna, 38, arrived in the Zurich suburb of Winterthur in late February with her two young children and her mother. They live in the apartment of a friend’s parents.

“We slept in a refugee centre when we arrived, but it was not a good place for the children, no privacy, no good food. They even searched us every time we came back from outside,” she said.