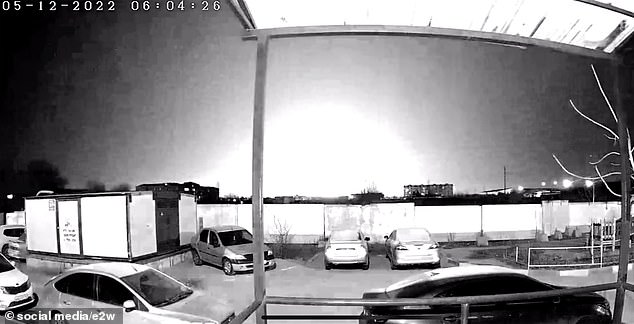 Early indications indicated that three individuals were killed and four others were hospitalized, according to BAZA media, which has links with law police.

VCHK-OGPU media reported unverified damage to aircraft at the base, which is roughly 750 kilometers from the nearest Ukrainian territory.

Around the Engels-2 military base in the Saratov region, incoming Ukrainian strikes were captured on camera as brilliant flashes interpreted as explosions.

In addition to the sound of air raid sirens, there looked to be shooting in the area.

Russian officials did not immediately acknowledge the attacks on the base, which has been used to launch conventional airstrikes against Ukraine throughout the current conflict.

A drone apparently triggered a nighttime airfield explosion at Engels-2 airfield in the Saratov region.

Air Raid Sirens and Explosions have been reported at Engel’s Air Force Base in the Saratov Region of Russia, a Major Bomber Base and the major Operations Base for the Tupolev Tu-160 “Blackjack” Heavy Strategic Bomber. pic.twitter.com/XciJuje56u

Moments after the claimed explosion at the Engels-2 strategic bomber airbase, fire trucks and police cars were observed passing through Engels.

The governor of the Saratov area, Roman Busargin, stated that there was no threat to civilians and that law enforcement agencies were investigating the event at a military site.

He stated, “There is zero threat to residents.”

All stories about the evacuation of the city are patently false and originated beyond the country’s borders.

He cautioned Russians against disclosing information of the apparent attack.

He advised citizens, “Let me remind you that criminal culpability is established for the distribution of knowingly incorrect information.”

All information pertaining to the websites, media, and citizens involved is swiftly given to law enforcement agencies.

The airbase was previously attacked by Ukraine on 5 December, causing Putin a great deal of embarrassment due to its great distance from the border.

Boris Rozhin, a Russian military blogger, stated, “According to preliminary information, a missile attempted to drop a drone on the airstrip.”

The Russian state news source Tass quotes the ministry of defense as saying:

A Ukrainian unmanned aerial vehicle was shot down at low altitude while approaching the Engels military base in the Saratov region on December 26 at approximately 01:35 Moscow time (2235 GMT).

Three Russian technical servicemen who were present at the airfield were fatally injured as a result of the landing of the drone’s debris.

The airbase was previously attacked by Ukraine on 5 December, causing Putin a great deal of embarrassment due to its distance from the border.

In November, according to satellite photographs, Russian bombers at the airport were being equipped with cruise missiles for an attack on Ukraine’s electricity network.

A local resident stated today, ‘When it struck for the first time on December 5th, the explosion was louder.

“I assumed someone’s gas had exploded, ran out into the street, and all the car alarms in the vicinity went off, despite the fact that I live two kilometers away from the airfield.”

Today, at approximately 2:30 a.m. local time, I heard a whistle followed by a loud clap, but no auto alarms went off.

The whistle preceding the “pop” was audible.

Ukraine did not openly claim credit for the previous attack, but stated that such actions constitute “karma” for the Russian invasion.

According to reports, he transported six aircraft from the airbase.

In the attack on 5 December, two Tu-95s were damaged and two service members were injured.

Following this strike, a placard near the airstrip said “Death to the Nazis.”