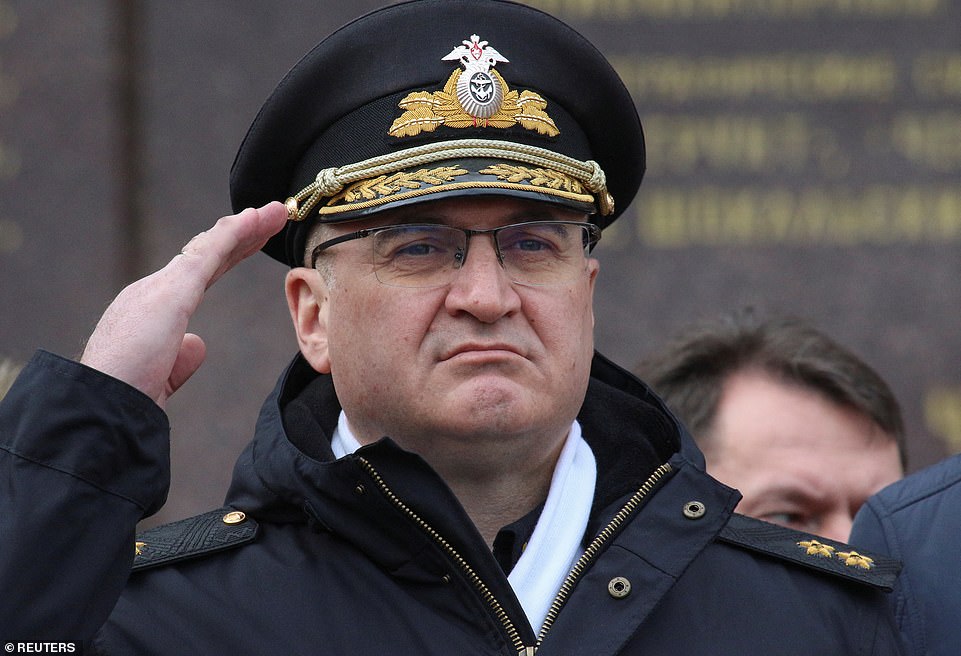 Russia’s top commander General Valery Gerasimov has been suspended, a top adviser to the Ukrainian president has claimed, while a clutch of other officers have been sacked or arrested amid a rumoured purge of top brass.

Oleksiy Arestovych, a veteran of military intelligence and one of President Zelensky’s inner circle, claimed late Wednesday that Gerasimov – the chief of staff of the Russian army – has been suspended as Putin looks for senior commanders to blame over his blundering invasion of Ukraine.

Arestovych, speaking to dissident Russian lawyer and politician Mark Feygin on YouTube last night, said: ‘According to preliminary information, Gerasimov has been de-facto suspended. They are deciding whether to give him time to fix things, or not.’

Two further army commanders have been fired due to heavy battlefield losses, according to information released on a Telegram channel run by the Ukrainian interior ministry, which also claimed the commander of the Black Sea fleet has been sacked and arrested and his vice admiral has been placed under investigation.

Arestovych stressed that his information is ‘preliminary’, but it comes after Gerasimov failed to appear during Russia’s Victory Day parade in Moscow on Monday which he was widely expected to attend. It also comes after he was reportedly wounded by shrapnel in Ukraine when Putin sent him there in order to turn the war around.

Putin’s army – once championed as the world’s second-best – has been handed a series of humiliating battlefield defeats in just two months of fighting in Ukraine that has seen more than 10,000 troops killed, hundreds of tanks destroyed, its Black Sea flagship sunk and Russia’s international standing trashed.

Just yesterday, it was revealed that Russian troops were massacred while trying to cross a river in the Donbas after Ukraine discovered their sneak-attack and unleashed an artillery barrage that destroyed at least 58 vehicles.

After the failure in Ukraine – repressions and purges in the Russian army,’ a post from the Find Your Own Telegram feed, run by Kyiv’s interior ministry, said late yesterday.

‘The Commander of the Black Sea Fleet, Admiral Igor Osipov, was removed from his post and arrested. [There are] Investigative actions in relation to… first deputy commander of the fleet, Vice Admiral Sergei Pinchuk.

If confirmed, it would mark the largest purge of senior military commanders during the conflict so far and represent a tactic admission by Putin that the invasion has largely been a failure.

Despite being forced to retreat from Kyiv in the first phase of the war and failing to make a breakthrough in the Donbas in the second, Putin has continued to insist that his military is achieving all of its targets on time and in accordance to the plan – statements echoed by his lapdog officials and puppet propagandists.

But the goals have continued to change. Initially, the aim was to seize Kyiv in a rapid attack designed to topple the government and install a puppet regime – revealed by a Russia state media article that was mistakenly published just days after the war started which preemptively declared victory.

Once it became clear that Russia lacked the manpower to take Kyiv, it retreated – but generals claimed that had been the goal all along. Kyiv, they said, had now been demilitarized which would allow them to focus all of their efforts on liberating Donbas: A region in the east that Putin has declared to be independent.

But Russia has yet to make any significant gains on this front, even in Mariupol – the heavily besieged southern city where Ukrainian troops are holed up in a huge steel works – instead inching forward in a hugely bloody advance that is draining both men and resources.

Putin was thought to have ordered his generals to produce a victory for him to brag about during Monday’s Victory Day parade in Moscow. In the end, he simply avoided the topic of victory in Ukraine altogether – saying simply that troops were fighting ‘for our people in Donbass, for the security of our Motherland, for Russia.’

He also made no mention of officially declaring war on Ukraine – a move that many had feared because it could lead to a full mobilisation of Russia’s military reserves or a general conscription, with new recruits poured on to the battlefield in an attempt to achieve victory at any cost.

It could indicate little more than unrealised hype built around a day that – by its nature – is heavy on symbolism but light on action. Or, viewed another way, it could indica