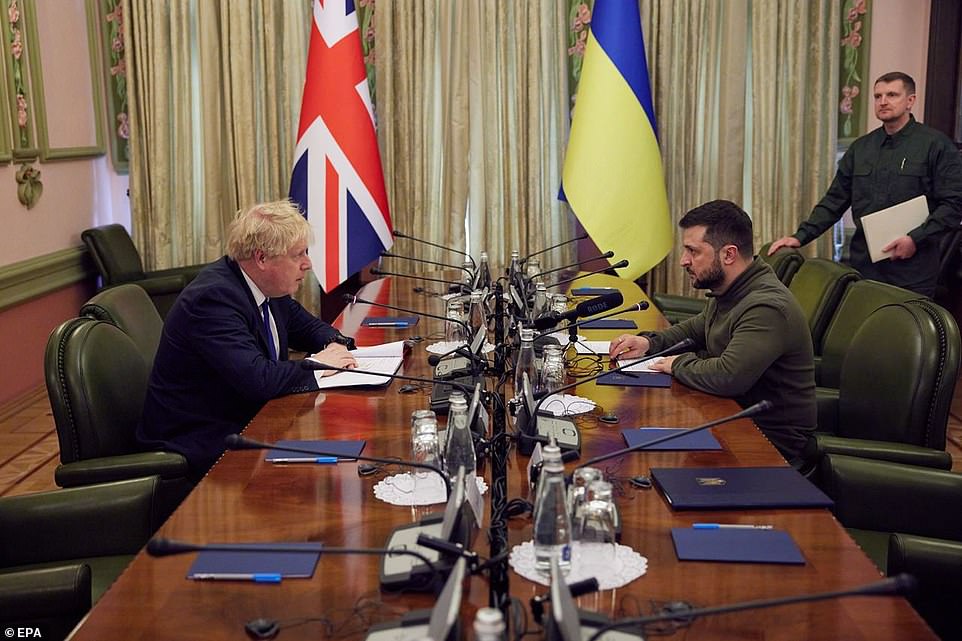 In a statement, Russia’s foreign ministry announced the following UK politicians and officials will be banned from entering Russia:

‘In the near future, this list will be expanded to include British politicians and parliamentarians who contribute to whipping up anti-Russian hysteria, pushing the “collective West” to use the language of threats in dialogue with Moscow, and shamelessly inciting the Kiev neo-Nazi regime.’

London has been part of an international effort to punish Moscow with asset freezes, travel bans and economic sanctions, since Putin moved troops into Ukraine on February 24.

Mr Johnson has also accused Russia of committing war crimes in Bucha and Irpin, and has insisted that ‘Putin must fail’ – a mantra he repeated yet again this week in his apology to the British public after being fined by Scotland Yard for breaking Covid lockdown laws.

At a press conference with Ukrainian President Volodymyr Zelensky, the PM said: ‘What Putin has done in places like Bucha and Irpin is war crimes that have permanently polluted his reputation and the reputation of his government.’

And President Zelensky has hailed Mr Johnson as the ‘leader’ of the ‘anti-war coalition’ – a sentiment which is likely to have angered Putin and his cronies.

The Kremlin last month effectively branded Mr Johnson Russia’s public enemy No1 over his role in galvanising Western nations against punishing Putin’s regime for launching its illegal and barbaric war against the former Soviet republic.

The Russian tyrant’s notorious spokesman Dmitry Peskov, who has himself been sanctioned by the UK, singled out the PM as the ‘most active’ opponent of his brutal war, warning: ‘As for Mr Johnson, we see him as the most active participant in the race to be anti-Russian. It will lead to a foreign policy dead end.’

The PM acknowledged he was ‘deeply hostile’ to Putin’s war, but insisted he was ‘not remotely anti-Russian’.

Speaking at an emergency NATO summit in Brussels, he likened Putin’s tactics to those of the Nazis, saying: ‘What Vladimir Putin is doing, the way he’s leading Russia at the moment, is utterly catastrophic – his invasion of Ukraine is inhuman and barbaric.

‘And the conduct of that invasion is now moving into the type of behaviour that we haven’t seen in the continent of Europe for 80 years, and it’s horrific.

‘So you can be sympathetic towards ordinary Russians, who are being so badly led, but you can be deeply hostile to the decisions of Vladimir Putin.’

It comes as Russia accused the US and NATO of shipping the ‘most sensitive’ weapons including long range ‘multiple launch rockets systems’ to Ukraine, adding that Western involvement was ‘adding fuel’ to the conflict and could bring ‘unpredictable consequences’.

Putin chairs a video conference call on the situation in the oil and gas industries, from the official residence at Novo-Ogaryovo, April 14, 2022

A man stands on a damaged bridge in Kyiv area, Ukraine, Saturday April 16, 2022

Smoke is seen rising over Darnytskyi District of Kyiv, Ukraine on April 16, 2022