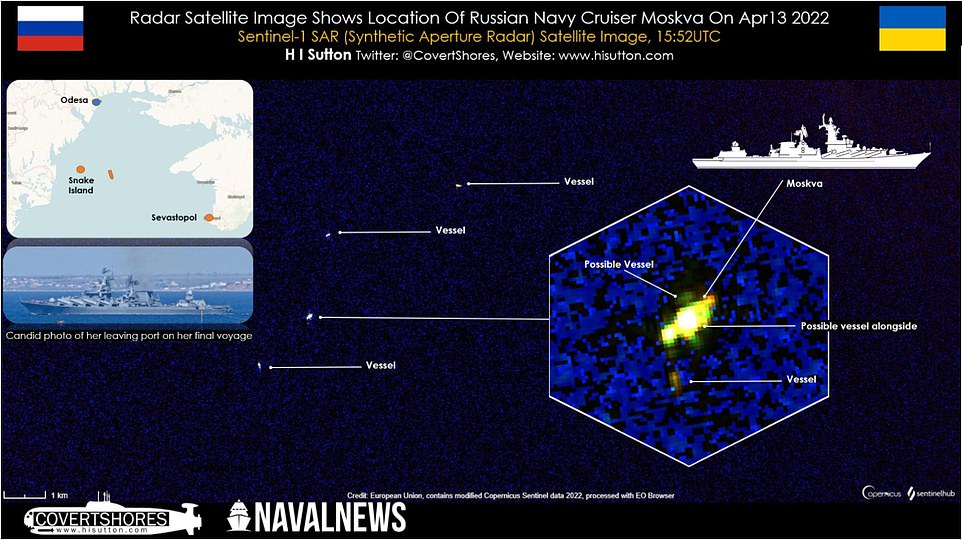 Satellite images show the pride of Putin’s Black Sea Fleet burning while other vessels are scrambled to rescue those onboard before it sank after it was struck by Ukrainian missiles in an attack which Kyiv has claimed killed all 510 crew on-board including its captain.

Radar satellite imagery of the northern Black Sea on April 13 appears to pinpoint the Soviet-era Moskva warship, which Ukraine said was struck by two Neptune cruise missiles fired by one of its batteries near the port city of Odesa. Other vessels are also seen in attendance, with reports suggesting they are rescue vessels

Naval News found the Moskva in satellite imagery that employed synthetic aperture radar (SAR), technology that can ‘see’ through clouds. The satellite which took the image passed over the area at around 6.30pm local time on Wednesday, the publication said.

It pinpointed the coordinates of a ship matching the Russian vessel and its dire situation to 45°10’43.39″N, 30°55’30.54″E – a position east of Snake Island in the Black Sea, 80 nautical miles from Odesa and 50 nautical miles away from the closest stretch of Ukrainian coastline.

‘Based on analysis by multiple people, we are confident that this shows Moskva’s final hours,’ Naval News said in its report. It added that Ukraine’s claim that it struck the vessel with two Neptune anti-ship cruise missiles would be possible on account of the Moskva being in-range of such weaponry.

It also said that the position of the huge warship matches its previous location patterns since it was positioned off the coast of Ukraine when Russian President Vladimir Putin first launched his brutal invasion on February 24. Naval News added that the location was ‘very close’ to where it was spotted in other satellite imagery on April 12.

Analysis of the satellite image also found other vessels in the water around the Moskva, suggesting Russia launched a rescue mission to save the crew of the ship that it said was sunk by a fire on board, which resulted in ammunition exploding. Moscow has made no mention of a Ukrainian attack.

While Russia has not released any information of its casualties, Kyiv has claimed that all crew were killed in the attack on the ship. It has been reported the Kremlin’s rescue mission failed due to stormy weather at the time.

Radar satellite imagery of the Black Sea on April 13 appears to pinpoint the Moskva warship, which Ukraine said was struck by two Neptune cruise missiles fired by one of its batteries near the port city of Odesa. Other vessels are seen in attendance

The Moskva – pictured leaving port at Sevastopol for the last time on April 10 – may have been carrying two nuclear warheads when it sank after a fire and explosion on board, experts and analysts have warned