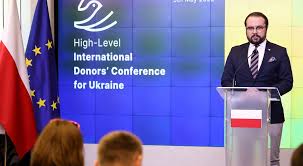 Ukraine donors’ conference takes place in Poland
An international donors’ conference to raise money for Ukraine is taking place in the Polish capital, Warsaw.
The event is ‘co-hosted’ by Poland and Sweden in co-operation with the EU, with European Commission President Ursula von der Leyen and European Council president Charles Michel in attendance.

Ukrainian President Volodymyr Zelensky addressed the event via video link, saying funds were needed to rebuild his country’s economy and infrastruture, adding it would be an “investment in the stability of the whole of central and eastern Europe.”

“Rebuilding Ukraine from the destruction of the war is a huge effort in which we want to involve the whole world,” Polish Prime Minister Mateusz Morawiecki wrote on Facebook shortly ahead of the start of the conference.

More than a quarter of Ukraine’s population have fled their homes since the Russian invasion on 24 February, including 7.7 million people who are internally displaced and 5.2 million who have fled abroad. More than three million have fled to Poland.