Skip to content
Home » News » News » UK should quit Nato once the war in Ukraine is over, says Green leader Adrian Ramsay 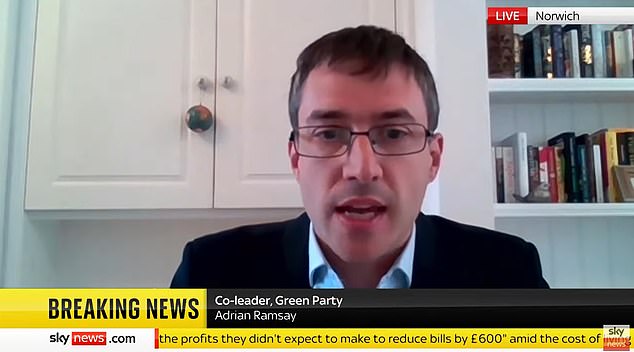 The Green Party today reiterated its desire for the UK to quit Nato – once the war in Ukraine has ended.

Its co-leader Adrian Ramsay told Sky News he did not want to ‘change structures in the middle of a conflict’, but believes the UK’s long-term aim should be to leave the military alliance.

Nato has been given a new lease of life by Vladimir Putin’s aggressive assault, with the alliance forming the bedrock of aid to Kyiv to help it fight back Russian forces

But asked on Sky News whether the Greens’ position on Nato has changed as a result of the Ukraine conflict, Mr Ramsay confirmed it has not.

Asked to confirm again that the Greens want the UK to leave Nato, he added: ‘Yes, that is our long-term policy that we would like to see far greater focus on peacekeeping institutions and institutions that support a reduction in our nuclear weapons and countries moving away from nuclear weapons.

‘But in the short-term, of course we are not proposing moving out of Nato in the middle of a conflict.’

He was deputy leader of the party from 2008 to 2012 and is the candidate for the proposed new North Suffolk seat at the next General Election.

He told Sky: ‘We have a long-term policy about reviewing what structures we need to have to build peace in the world and we have to remember this conflict has happened at a time when we are part of Nato, when we are still seeing nuclear weapons dominate.

‘Of course we are not about changing structures in the middle of conflict and what we need to do at the moment is focus on how Ukraine can be supported in a wide variety of ways.’

Mr Ramsay suggested the UK needs to focus on ‘peacekeeping and getting the parties to the table’ as well as ‘stronger economic action’.

He added: ‘Across Europe we are still sending a billion euros a day to Vladimir Putin’s war machine from buying Russian oil, gas and coal and we need to wean ourselves off this addiction, which of course the Greens want us to do.

‘If we want to avoid funding that war machine and really put strong economic pressure on Russia, that has really got to be stepped up.’

Meanwhile Lib Dem leader Ed Davey today suggested that the removal of Vladimir Putin from power in Russia would herald the end of nuclear weapons.

He told the BBC that he supported the UK’s nuclear deterrent but if someone else was in charge in Moscow ‘maybe we can change the world’.

However he downplayed the idea that it could be anytime soon, adding: ‘The Conservative government want to cut the army by 10,000 troops, to the smallest number since pre-Napoleonic times.

‘Liberal Democrats have actually supported them when they helped the Ukrainian army, that is good, we really need to get behind the Ukrainians.

‘Be in no doubt, we think the nuclear deterrent should stay, but in the long term of course it would make a safer world if we could get rid of all nuclear weapons, I mean that’s just, that’s common sense.’