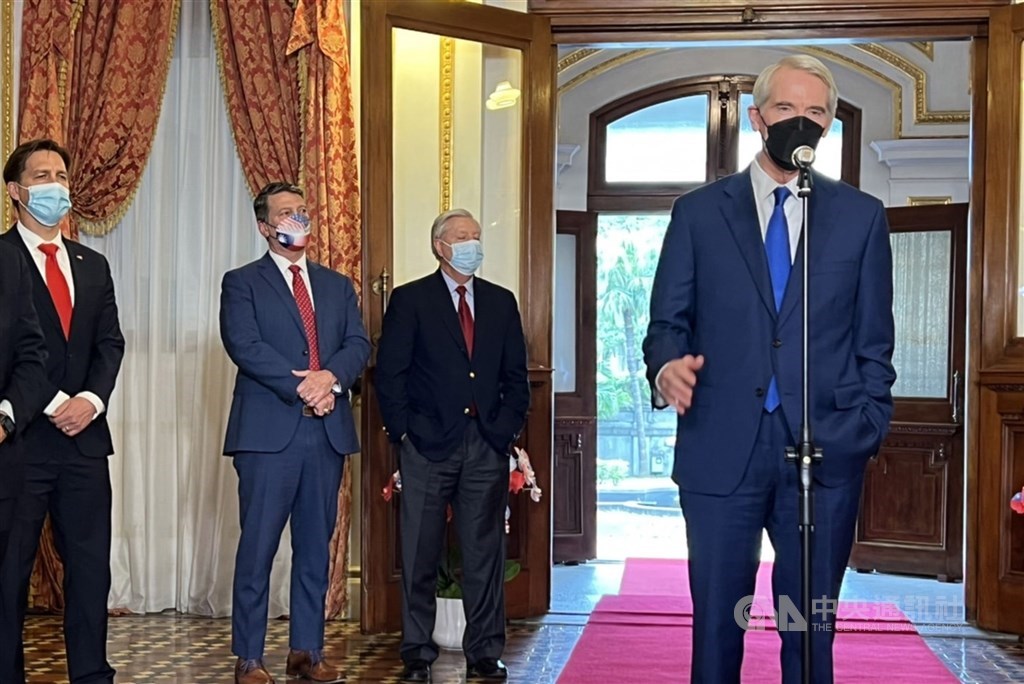 Taipei, April 15 (CNA) A free trade agreement (FTA) between the United States and Taiwan will boost bilateral ties and act as a “deterrence” to China, U.S. Senator Robert Portman, part of a senior Congressional delegation currently on a brief visit to Taipei, said Friday.

Portman, who serves as the ranking member of the Senate Homeland Security Committee, said at a press conference in Taipei that the U.S. should reach out to Taiwan and begin talks on a bilateral FTA.

According to the senator, such a trade deal would “deepen bilateral economic ties in ways that would be good for both countries economically.”

At the same time, it would show strong U.S. support for Taiwan and would therefore “act as a deterrence to any malign activity that China might be considering,” he added.

The press conference was held prior to the delegation’s luncheon with Foreign Minister Joseph Wu (吳釗燮).

The U.S. delegation’s press conference in Taipei Friday. Courtesy of the Ministry of Foreign Affairs
The delegation, led by ranking member of the Senate Budget Committee, Lindsey Graham, arrived in Taiwan Thursday evening as part of a larger visit to the Indo-Pacific region, which also includes stops in Australia and Japan.

Taiwan’s government has expressed strong interest in negotiating an FTA with the U.S., after signing similar deals with New Zealand and Singapore in 2013.

The United States Trade Representative, on the other hand, noted in its 2022 Trade Policy Agenda and 2021 Annual Report in March that the U.S. plans to intensify its engagement with Taiwan to address outstanding trade concerns.

However, the report did not address hopes that the two sides might begin negotiations on an FTA.

Meanwhile, asked whether the U.S. would come to Taiwan’s defense in the event of an attack by China, Graham did not provide a direct answer but said: “Every option is on the table.”

“If America abandons Taiwan, it will change the world fundamentally for the worse,” Graham said. “Who would be our allies in the future? To the American people, it’s good to have allies.”

He added that the U.S. would not seek conflict, but would fight for its values.