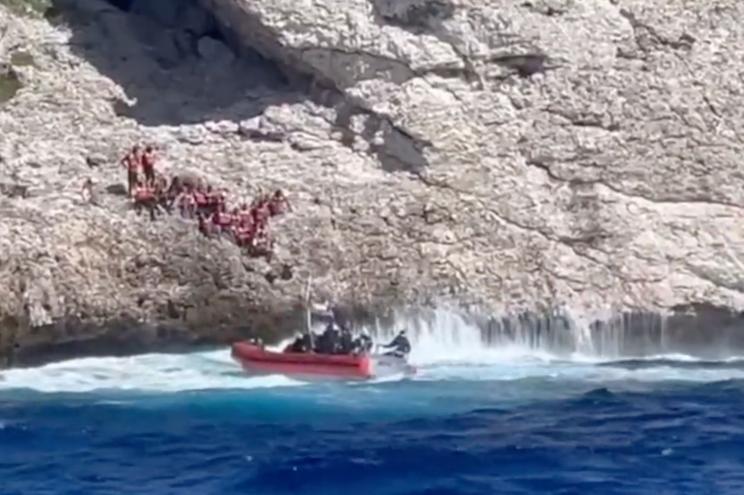 On Monday, the US Coast Guard reported it rescued 34 Haitians who had been abandoned by smugglers on a cliff in Puerto Rico.

The USCG Cutter Heriberto Hernandez, a 154-foot vessel based in San Juan, reacted to reports of a group of individuals trapped on Monito Cay, an uninhabited natural reserve off the coast of Mona Island, Puerto Rico.

A Coast Guard Ocean Sentry aircraft flew over the region and verified the presence of many campfires, triggering the vessel’s reaction.

“This case is concrete proof smugglers are more than willing to abandon people in very austere and highly dangerous environments like Monito,” Renfrow said in a statement.

Cutter Heriberto Hernandez deployed a small boat to approach the cliff while the group of people proceeded to the lowest place to accomplish the rescue. Once the little boat was in place, each individual took turns leaping from the cliff into the ocean and being dragged to safety.

The group was given food, drink, and basic medical attention when the little boat returned to the main vessel. The survivors, 26 men, seven women, and one kid, were delivered to US Border Patrol officers in Ramey Sector in Mayaguez, Puerto Rico.

The operation was part of a larger multi-agency effort to assist Operation Caribbean Guard and the Caribbean Border Interagency Group.

The Coast Guard allegedly seized 11 unlawful journeys in the Mona Passage and seas surrounding Puerto Rico between Oct. 1 and Nov. 30, transporting a total of 324 persons without American citizenship.

According to the USCG, 300 of those aboard were Dominicans, 23 were Haitians, and one person’s nationality was unclear.