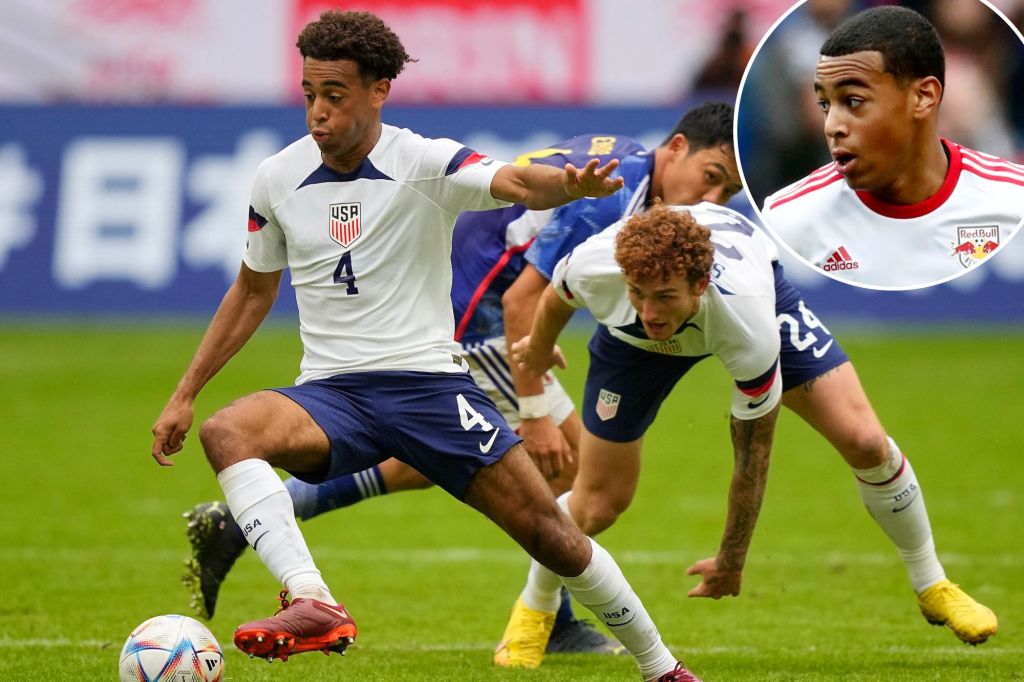 To qualify for the 2018 World Cup, the United States needed only to defeat Trinidad and Tobago before midnight. Even with a tie or loss, Panama and Honduras still needed to win in order for the United States to be eliminated.

Not only did the United States lose in a stunning manner, but Panama shocked Costa Rica and Honduras defeated Mexico, causing the United States to miss the tournament in Russia for the first time since 1986. Adams and his stepfather were disheartened since Adams had not yet received a national team cap. Melissa Russo, his mother, did not get why.

“She was unaware,” Sullivan stated to The Post. What do you mean, what’s the big deal? This is massive. This is terrible, and it is holding us back. That moment and watching the World Cup, as well as what might have been, is what I recall most vividly.

Earlier in his career, Tyler Adams, who has 32 caps for the US men’s national team, played for the New York Red Bulls.
AP (2) (2)

A month later, Adams was called up for the first time in a friendly match against Portugal. And the Hudson Valley native, who graduated from Roy C. Ketcham High School in Poughkeepsie in 2017, won’t only be in midfield when the United States returns to the World Cup against Wales on Monday in Qatar. The 23-year-old will be one of the faces of the team, along with Christian Pulisic, Weston McKennie, Giovanni Reyna, Sergio Dest, and Yunus Musah, who fans think will be a golden generation for the United States.

Adams emerged into the spotlight at the time with the New York Red Bulls, the MLS team whose youth program he attended. He relocated to Europe in 2019, playing for the energy drinks company’s German club, Red Bull Leipzig, under former Red Bulls coach Jesse Marsch, before joining Leeds United, also managed by Marsch, this past summer.

His resume now includes 32 games (known as caps) for the national team, a significant part in qualifying this time around, and a pivotal role in the Champions League with Leipzig over the past three seasons in Germany.

John Wolyniec, who coached Tyler Adams on the Red Bulls’ second squad and was with him in the development program, told The Post, “Even when he was standing with his U12 team, you kind of knew he was going to be very outstanding.” “You did not know how or when or anything, but you simply knew. And there was something, it was physical — he was tall for his age, whatever — but it was more than that… He emanates an atmosphere of competition and high standards.”

Adams had confidence in his ability and exemplary work habits at an early age. The coaches needed to advise him to slow down and conserve his energy, rather than always pushing so hard. Despite having worked in school as a social studies teacher, Sullivan has also coached NCAA soccer. Adams’s family recognized that his future lay in soccer and made sacrifices appropriately.

“I immediately tell that his athletic potential was world-class,” said Sullivan, who joined the Adams family when Adams was a middle school student. “And that his IQ was unparalleled. I believe his greatest weakness was the technical aspect of the game, but he was aware of this and understood he needed to work on it, so he did. … I hate to admit that, but I’m not really surprised by his current situation.

When coaches placed Adams on the right side of the defense as a right back, Sullivan advocated for him to play in the middle, a position that has since been validated. Adams, according to Wolyniec, was the type of player who made his coaches better because he was both resistant and persuadable.

“He wasn’t going to take things at face value because he was so determined,” Wolyniec said. “He held his own opinions, and it was nearly impossible to convince him otherwise. Once he understood where you were coming from or what you were discussing, he was receptive to information.

This belief in himself and belief from others is a recurring theme throughout Adams’ career. Adams’ agent, according to Sullivan, attempted to convince then-USMNT coach Bruce Arena to include Adams in the qualifiers in 2017, when Pulisic was the only member of the young core in Trinidad.

This time, such coercion was unnecessary. Adams participated in 13 of 14 matches during the final qualifying round, which spanned six months from September 2021 to March 2022. Although his entire family will be unable to attend, a handful will be in Al Rayyan on Monday to watch Adams sing the national anthem from the heart on the international stage.

Sullivan stated, “I believe it will be extremely emotional for the entire family.” “Tyler recognizes that he is where he is today because of his family and coaches. He knows that everyone who has helped him along his journey will feel similarly. … Because despite the fact that Tyler is present, everyone has a piece of him.”