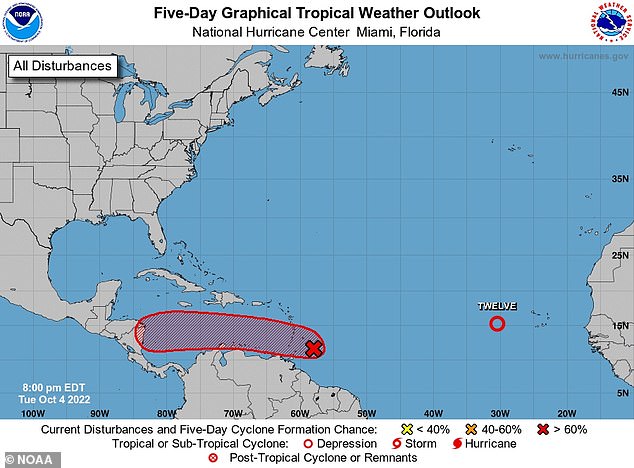 Just days after Hurricane Ian left portions of Florida in ruins and its death toll on the rise, two “tropical disturbances” have developed in the Atlantic Ocean. Forecasters are keeping an eye on the ferocity of the systems.

According to the National Hurricane Center, Tropical Depression 12 had sustained winds of 35 mph and was moving northwest at 12 mph around 5pm on Tuesday. It was situated 440 miles west of Cabo Verde.

Forecasters expect the depression to be’short-lived’ and evaporate late Thursday, but increasing upper-level winds are expected to stymie any possible expansion from there.

Forecasters expect that a second disturbance that was east of the Windward Islands around 8 p.m. on Tuesday might intensify during the next days.

According to the NHC’s most current Tropical Weather Outlook, “Regardless of development,” heavy rain with isolated floods as well as gusty winds are anticipated across parts of the Windward Islands, northern South America, and the ABC Islands during the next few of days.

“Those with interests in those areas, as well as those in Central America, should continue to follow the development of this system.”

The storm has an 80% probability of intensifying into a tropical depression by Sunday night, according to the National Hurricane Center, and a 60% chance of doing so by Thursday evening.

If the system persists over open sea and moves westward at about 15 mph over the Windward Islands and into the Caribbean Sea during the following several days, a tropical depression is likely to emerge.

Tomorrow morning, if required, another Air Force Reconnaissance mission is planned to look into this system.

As villages in Florida were destroyed by Hurricane Ian, the death toll from the storm climbed grimly and steadily.

While locals mourn their deaths and many struggle with the difficult road to recovery, rescue teams keep looking for survivors.

At least 109 fatalities from the hurricane have been reported as of Tuesday, with 105 occurring in Florida and 55 in Lee County.

According to the Florida Department of Law Enforcement, the Florida Medical Examiners Commission documented three deaths associated with Hurricane Ian: one in Martin County, one in Manatee County, and one in Sarasota County.

Last Wednesday, Ian made landfall in Florida as a catastrophic Category 4 storm, cutting off inhabitants from the mainland and leaving hundreds of thousands without electricity.

According to PowerOutage.us, more than 400,000 people lost power, with Lee and Charlotte counties suffering the most damage, with 208,263 and 75,721 customers impacted, respectively.

According to CNN, the storm also left many government workers and civilians without a place to live.

Councilman Bill Veach of Fort Myers Beach informed the broadcaster that his 90-year-old home is in ruins.

It’s an apocalyptic scene when you’re wandering through the ruins, Veach added.

Despite the damage, he said, there are still things to be grateful for.

You are happy when you run across a buddy who you weren’t sure was living or dead. A thrill that transcends the destruction of things, he remarked.

In addition to announcing the inauguration of the first Disaster Recovery Center in Fort Myers for people and businesses impacted by Hurricane Ian, Florida Governor Ron DeSantis said that 79,000 buildings had been checked.

According to Stacy Verdream, she and her brother learned Monday that their uncle, Mike Verdream, had perished in the storm.

She said that the conversation was cut short because the man described himself as being terrified, which was unusual for him.

He constantly presents a bold front. But she saw that he seemed utterly afraid.

According to Elizabeth McGuire’s 49-year-old relatives, she passed away in bed while still holding her cellphone.

One storm will cost you more than one hundred blizzards, she remarked.

“My daughter is dead, my husband’s business was wrenched out…” I never had anything taken from me by a snowstorm.

The Florida Division of Emergency Management is attempting to compile a list of mission personnel, but it is still unknown how many individuals are still missing following the hurricane.

According to a Facebook post by the school system, more than half of the schools in Lee County, which includes Fort Myers and Fort Meyers Beach, had some level of damage from Ian, and 14% sustained serious damage.

Officials expected that number to increase after Lee County Sheriff Carmine Marceno told reporters he was worried about the rescue personnel.

We are concerned about burnout. They don’t get to go home to their families since we work 12-hour shifts, he said.

The sheriff expressed his gratitude to the National Guard, government employees, and volunteer rescuers for helping to lighten the load on his agency.

Everyone wants to assist, despite the horrific damage we sustained, added Marceno.

“It’s incredibly comforting after these awful circumstances since a lot of individuals had their life wiped away in minutes and hours,”

By Monday night, officials reported that more than 1,900 people had been saved around the state.

Joe Biden, the vice president of the United States, is anticipated to meet with DeSantis and travel the state’s southwest to see the devastation firsthand.

More than a dozen Florida counties received major disaster designations this week, and in a speech on Friday, Vice President Biden vowed that his government will support people impacted “every step of the way.”

The destruction is expected to cost roughly $55 billion, but actual costs may be greater.