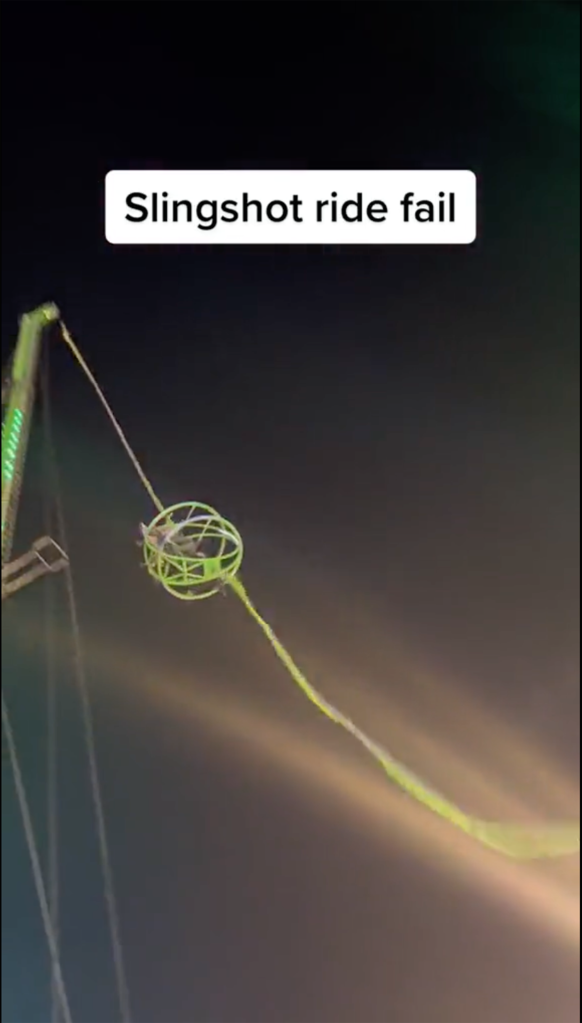 Two screaming teenage guys were hoisted in the air after a malfunction on a slingshot ride at a London amusement park was captured on horrifying video.

Wednesday evening, a terrifying incident occurred at the Winter Wonderland attraction in Hyde Park when one of the bungee-style cords anchoring the ride’s steel cage appeared to break in mid-air.

As spectators watched in astonishment, footage from the scene showed the cage abruptly colliding with a mast and dangling on its side.

Becky Littlewood, a witness, told the BBC, “We watched it for a bit and then, as we looked back, we heard a loud crash and it was hanging from the side; two people on the ride were screaming.”

As [the lads] were being dragged into the air, it appeared like an attempt was made to reset the ride.

She continued, “Security rushed forward and began shoving us back.”

When emergency services arrived, the steel cage had already been lowered to the ground, according to the police.

Police said that the lads were remarkably unharmed and departed the site after being examined by medical personnel.

The industry’s governing safety agency, the Amusement Device Inspection Procedures Scheme, has attributed the incident to a “technical fault” with the ride’s gearbox.

After one of the bungee ropes appeared to break, the cage was captured on camera crashing violently onto a pole.

“We can affirm that neither the elastic cord nor the steel wire rope that supports the reverse bungee gondola in which the public sits have broken or otherwise failed,” they stated in a statement.

We inspected the ride at 07:00GMT on Thursday and discovered a technical issue within the sealed gearbox that controls the elastic cord and steel wire rope release.

A spokeswoman for Hyde Park Winter Wonderland stated that all other rides were working normally following the incident.