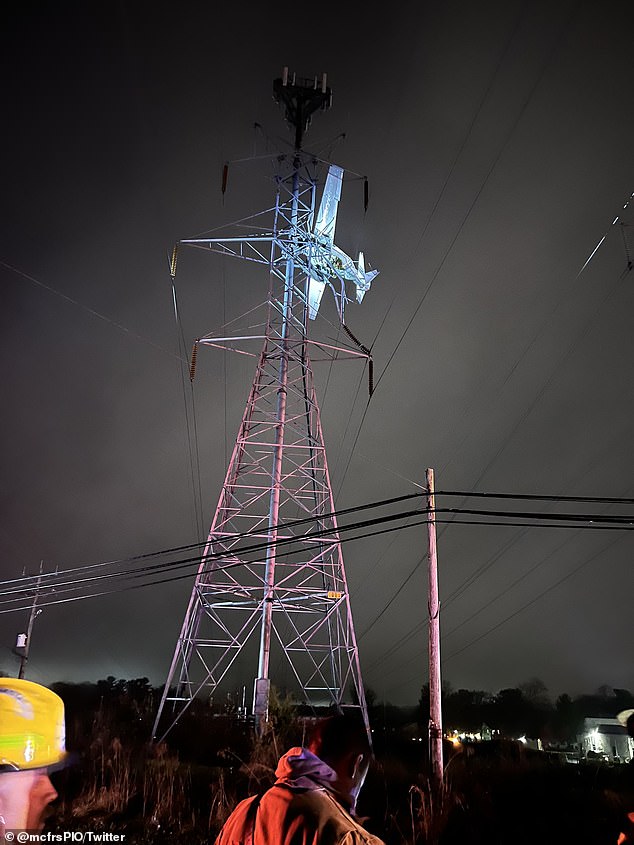 A pilot and passenger became trapped after a small plane crashed into live electrical lines in a Maryland neighborhood on Sunday evening, causing extensive power outages. A rescue operation is currently ongoing to free the pilot and passenger.

In Gaithersburg, the plane could be seen dangling 100 feet in the air on a power tower in terrifying footage.

Pete Piringer, chief spokesperson for the Montgomery County Fire and Rescue Service, reported that two unhurt passengers were on board the plane.

WUSA9 stated that crews at the location are working to rescue the individuals in a high-angle rescue.

In the vicinity of Rothbury Drive and Goshen Road in Montgomery County at approximately 5:40 p.m., officials responded to an accident.

Officials at the location are attempting a high-angle rescue to rescue the two individuals.

Piringer stated that the plane was stranded approximately 100 feet above the ground and that live transmission lines complicated rescue efforts.

He stated, “Everything is still active at this time.”

Pepco said that approximately 80,000 customers in Montgomery County were without electricity.

According to Pepco, the aircraft made contact with the company’s transmission wires.

The accident occurred in Gaithersburg, a tiny town located around 24 miles northwest of Washington, D.C.

A spokeswoman for Pepco stated, “The business is examining the damage and contingency options to restore service to affected consumers.” Pepco is collaborating closely with Montgomery County Fire and Rescue Services and is awaiting approval to enter the affected area before beginning work to stabilize the electric infrastructure and restore service.

As there are still live wires in the scene of the collision, the Montgomery County Department of Police requests that people stay away.

Piringer did not mention a possible cause for the accident.