Skip to content
Go Home «» News «» World News «» Two Nebraska adolescents are injured in a fight, while their parents lament the condition of the high school 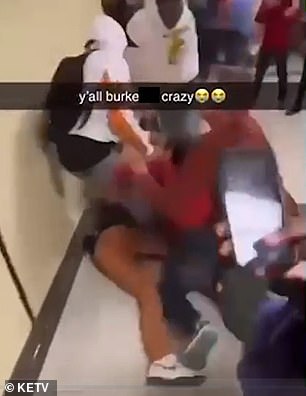 Two high school students in Omaha, Nebraska, sustained cuts when a fight erupted and a student drew a knife.

Wednesday about 11:20 a.m., a student at Harry A. Burke High School captured on shocking video the battle that broke out in the hallways.

It begins with three boys hitting and stomping on a single pupil until a school officer and other adults intervene to separate them.

The boy who was being beaten suddenly stands up and draws a knife, frightening away witnesses.

He then lounges at one of his attackers until one of the adults intervenes and removes the knife from his grasp.

The adults appear to be attempting to calm down the adolescent before he attacks one of the confined children on the ground.

As additional adults come in to bring the situation under control and move the students away from the site, the security officer captures the boy.

Two high school students were injured when a fight broke out at Omaha, Nebraska’s Harry A. Burke High School. A bunch of boys are shown on video attacking a student in the middle of the corridor before a security guard and adults intervene.

The child on the ground then rises, draws a knife (middle), and lunges at one of his attackers while an adult attempts to stop him.

The brawl reportedly left two kids with minor cuts and bruises, as reported by the Omaha police.

In a letter to parents, the administrator of the school, Darren Rasmussen, stated: ‘Staff and security responded swiftly to de-escalate the situation. The event was soon contained, therefore there was no need to place the school on Hold or Secure.

We will continue to work with the families of the involved pupils, and disciplinary action will be made as necessary.

The identities of the students involved in the altercation remain unknown.

Despite Rasmussen’s assurances, parents and children in the district stated that the fight was not an isolated incident nor the only one that occurred that day.

Students are seen fleeing in terror as the adult wrestles the knife from the boy’s grasp.

The security officer is able to subdue the child after he attacked one of his attackers who was restrained on the ground.

LeeLynn Tuttle, who graduated from the high school in 2006, regrets sending her daughter there after the most recent incident.

She told KETV, “It’s a little unnerving as a parent, knowing that your children are going to school to be safe and learn stuff, and then you’re getting videos of children getting cut.”

Like, I’m terrified to bring my daughter to school every day, which shouldn’t be a problem.

Before the battle in the corridor, her daughter Hailee Osborn told a local outlet, ‘there was a fight in the gym beforehand.’

Rasmussen rushed to Twitter to send the following message in response to the unfavorable press surrounding the high school: “Don’t linger on the one unpleasant event that happened at school today when hundreds of fantastic things also occurred.”

Principal Darren Rasmussen (above) stated that only minor injuries were sustained by the pupils.

Later on Wednesday, he tweeted a statement requesting that people not concentrate on it when a single unfortunate event occurs at school. Parents and students have asserted that conflicts occur frequently at Burke High School.

»Two Nebraska adolescents are injured in a fight, while their parents lament the condition of the high school«