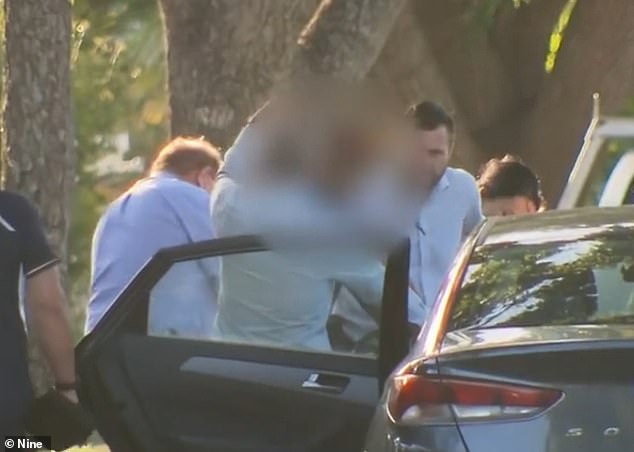 Two men were apprehended during a six-hour standoff with highly armed police.

The Queensland Police declared an emergency under the Public Safety Preservation Act (PSPA) soon before noon on Wednesday in Toowoomba, west of Brisbane, after two males allegedly barricaded themselves inside a residence with a pistol.

It is unknown at this time why police were sent to search the residence.

Upon arrival, police initiated negotiations with an allegedly armed guy inside the residence. Another man was also there in the residence.

Wednesday, following a six-hour confrontation with police inside a Toowoomba residence, two men were apprehended (above).

Residents within the Toowoomba emergency zone (above, in blue) have been warned by police to remain indoors as discussions continue with an allegedly armed man.

Just before 12 p.m., the police declared an emergency situation and advised inhabitants of Tor Street, Park Street, and Dalmany Street to “remain indoors.”

Officers evacuated some Park Street residents and stated that others will be relocated if required.

It is believed that police and one of the males exchanged approximately six gunshots late in the afternoon.

More than a half-dozen marked and unmarked police vehicles were visible in the vicinity, and all roads leading to the emergency zone were closed.

One unconcerned neighbor stated that emergency personnel are a common sight in the neighborhood.

She told Toowoomba Chronicle, “I’m not that concerned anymore; I was stunned because I didn’t know what was occurring.”

‘This is a good street because there is usually an ambulance running down it, so if you ever need one, just put out your hand and wave.

Put out your hand if you ever need a police officer because one is always running down the street.

As negotiations continue, a number of people in the vicinity of the Park St. residence have been evacuated.

A witness stated that Special Emergency Response Team cops were stationed in front of the residence early Wednesday evening.

Apparently, they were armed with firearms.

Two guys were arrested at the residence at approximately 6.30 p.m.

Officers Rachel McCrow and Matthew Arnold, who were fatally shot 185 kilometers northwest of Toowoomba in Wieambilla, are currently being laid to rest.

Two of the four officers ordered to search the property for the missing man Nathaniel Train were McCrow and Arnold.

However, Train, his brother, and the wife of his brother, Stacey, fired upon officers as they approached the residence.

It is believed that the three had meticulously planned the attack and were active on websites promoting anti-authority conspiracy theories.

On Wednesday, the two deceased officers were honored with a public funeral.

10:45 a.m. – Police arrive on Park Street in Toowoomba to conduct a search.

They get into negotiations with a man they believe is armed.

Another male is there on the premises.

Queensland Police declare an emergency under the Public Safety Preservation Act at 12:00 pm.

Residents of Tor Street, Park Street, and Dalmany Street are instructed to “remain indoors” while all roads leading into the neighborhood are sealed.

Specialist officers purportedly armed with rifles are spotted at the scene about 6:00 p.m.

Two males are arrested from the residence at 6.30 p.m.