Skip to content
Go Home «» News «» World News «» Two men, 78 and 27, are both killed in a vehicle collision in Thailand on Tuesday 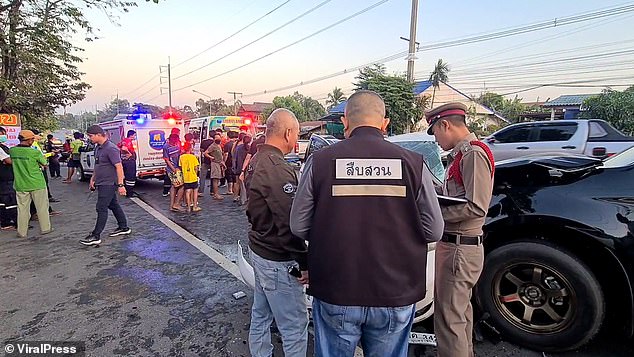 A British pensioner and his partner were murdered today in a horrific vehicle accident that is being investigated by Thai authorities.

When the accident occurred, the Briton was travelling in a white Toyota Yaris with his younger male partner, Tawid Kanadee, 27.

CCTV video reveals that Tawid slowed down to make a right turn onto a side road before being rear-ended by a silver Honda CRV. They were thrust directly into the path of an approaching black Isuzu pickup vehicle as a result of the accident.

The car collided with the Toyota, and the British victim, who was seated in the front left passenger seat, which took the brunt of the hit, had to be extricated from the debris immediately after the collision, which occurred at around 4:30 p.m. local time. He was declared deceased at the spot.

Tawid was transported by paramedics to the hospital, where he eventually succumbed to his accident-related injuries.

According to paramedics, the little car’s wreckage had to be dismantled in order to reach the British victim.

When slowing down to turn into a side road, the silver Honda CRV driven by school director Dr. Kanittha Thonglert, 57, collided with the rear of the couple’s vehicle, according to the findings of the investigation.

It appears that the black Isuzu had little time to respond when the automobile was pushed into its path. The other drivers involved in the collision did not sustain major injuries.

Lieutenant Colonel Ronnapong Chorsai of the Sawang Wirawong Police Station said, “The investigating officer is in the process of gathering evidence to file charges against the people involved who drove recklessly and caused the collisions and death.”

The tragic incident occurred barely one week after a truck and school bus collision at the same location in which one person was killed and one was wounded.

»Two men, 78 and 27, are both killed in a vehicle collision in Thailand on Tuesday«