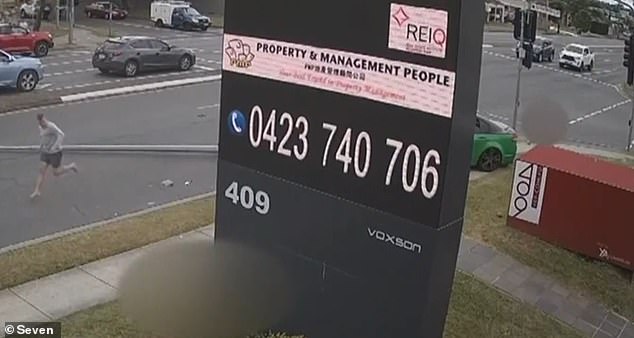 Two guys were arrested after they allegedly went through a red light in an unlicensed vehicle that crashed into a little boy riding his bicycle.

Thursday at 12:05 p.m., the kid was riding his bicycle with his brother and father when he was struck on Kessels Road in Macgregor, south of Brisbane.

A nearby business’s surveillance tape showed the three individuals crossing the road at a busy intersection’s traffic lights before they disappeared from view behind a massive sign.

The youngster was then allegedly struck by a green Holden Commodore, with video showing a bicycle flying through the air and losing its front tire.

In the midst of the pandemonium, a power pole falls before the father and sibling run to the boy’s rescue.

Friday afternoon, Queensland Police stated that two men, ages 24 and 19, from Wynnum West were arrested without incident. Charges have not yet been filed.

When they failed to halt for a Highway Patrol car conducting registration checks, one of them was allegedly driving an unregistered Commodore.

When police activated their lights, the Commodore allegedly accelerated off and ran a red light before striking with the child, who sustained minor head injuries.

While the youngster lay injured on the footpath, the vehicle allegedly fled the scene into a neighboring shopping centre.

His suspected passenger fled in the opposite direction.

The small youngster was transported to the hospital for treatment of several fractures and a brain injury.

His health is critical yet stable.