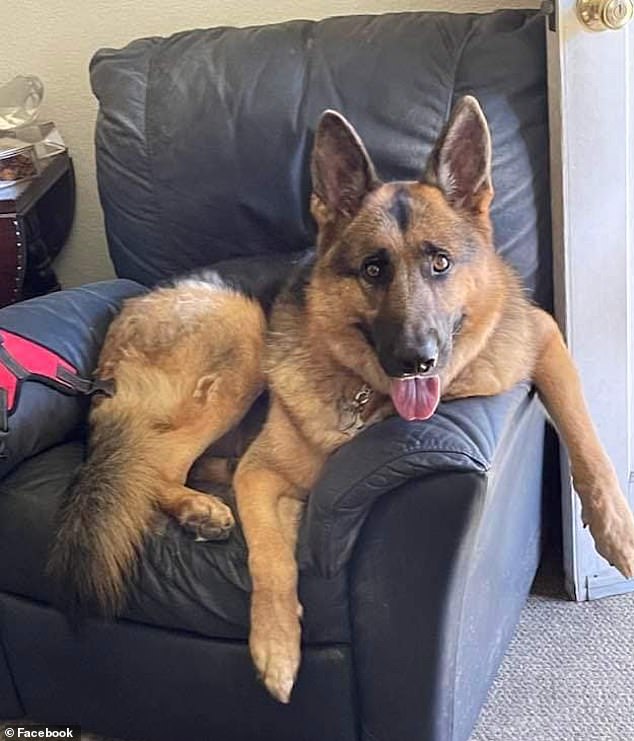 Two dog thieves abducted the 110-pound service dog of a 66-year-old California lady from her front yard before fleeing in a getaway vehicle.

Lisa Hartouni, a distraught dog owner, reported that when she entered her home to give her German shepherd Jack some dog treats, the dog was vanished.

KTLA News reported that Hartouni, who uses a motorized scooter for mobility, said the duo had just returned from their daily dog walk.

Two men are captured on tape approaching Hartouni’s home and removing her dog from her fenced-in yard. Before fleeing, the suspects placed the dog in a white vehicle.

One of the assailants was wearing a shirt with the words ‘Long Beach Certified’ on it.

On Monday, Jack’s owner uploaded a photo of him lounging in a leather recliner on the Lakewood and Long Beach Lost and Found Pets websites in the hopes that someone may recognize him and return him home.

“He is not violent, very interested, treats-obsessed, and will come when called Jack.” He is microchipped, immunized, and up-to-date on vaccinations.’ Hartouni said,

Hartouni had been approached by an unidentified male while walking her dog weeks before her audacious kidnapping. The man said that her shepherd belonged to one of his friends, and then he began to pursue her.

Hartouni believes she was under surveillance.

He spotted the dog and desired it for some reason. I do not believe it to be a friend’s dog. It was an alibi, a fabrication, she said, according to the news source.

Since Jack has gone missing, neighbors have banded together to assist the distraught dog owner in locating her four-legged companions. Flyers have been posted throughout the region.

Hartouni hopes that someone would return her son Jack to his beloved family.

She explained that she did not require the individual’s name or phone number, pleading instead, “Just take him somewhere secure.”