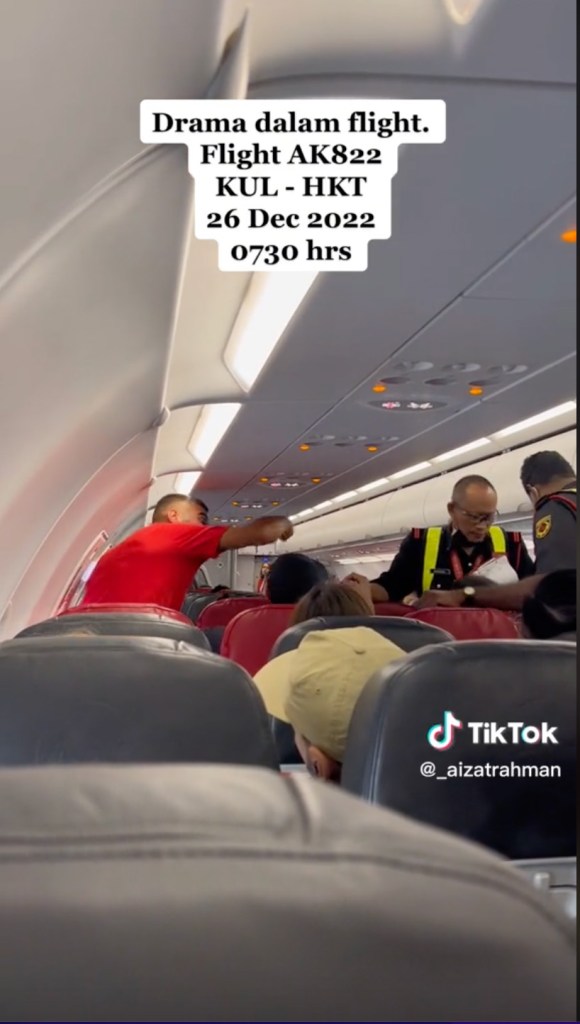 Two Australians en route to Phuket were captured on camera attacking fellow passengers before being removed from their AirAsia flight by patient airline personnel.

On the morning flight from Kuala Lumpur on Christmas Day, a worried passenger began filming the couple.

The pair rise from their seats to the cheers of their other passengers, who believe they are exiting the plane peacefully, but they are just getting started.

Two Australians were captured on camera attacking fellow passengers before being removed from an AirAsia flight by flight attendants.

A black-clad man exclaims, “We’re not getting off, you f—ing d—kheads!”

His travel companion in red responds.

We’ll see you there, right?

The black-clad man exclaims to his captivated audience, “I’m coming to Thailand!”

26 December, while on a trip from Kuala Lumpur in the morning, a concerned passenger began filming them.

The couple appears to target a group of passengers in the rear of the aircraft, yelling insults as AirAsia employees attempt to remove them.

The man in black returns to his seat, apparently thinking that the employees will forget about the incident.

He argues, “I was here before everyone else.”

The red man returns to retrieve his belongings.

“You’ll be dead when you get there,” he tells the rear passengers.

The second man in black follows the staff’s instruction and exits with a farewell shot towards the rear passengers.

When the last of the pair is removed, the cabin explodes in applause.

The individual who filmed the incident feared that it would get violent, but congratulated AirAsia employees for achieving a calm settlement.

“Credit must be given to the entire dedicated Air Asia security staff for their professional actions,” he stated.

Things could have gone wrong if you had acted irresponsibly in this situation.

Many agreed that the employees that day handled the matter “outstandingly.”

“Seriously, this type of issue is difficult to manage. Congratulations, one wrote.

“Honor the cabin crew, sibling. His communication abilities and the manner he handles the matter are superb!” remarked a third party.

The man in black accepted the staff’s instruction and exited the vehicle with a parting shot towards the rear passengers.

It is unclear what caused the conflict.

AirAsia was unable to comment on specifics due to privacy concerns, but told news.com.au that disruptive passengers may be subject to restrictions.

“AirAsia has a zero tolerance policy for any type of disruptive behavior, and our staff is well-trained to handle such situations,” said Kesavan Sivanandam, chief airport and customer experience officer.

“At the discretion of the airline, travel restrictions may be imposed for inappropriate behavior.”