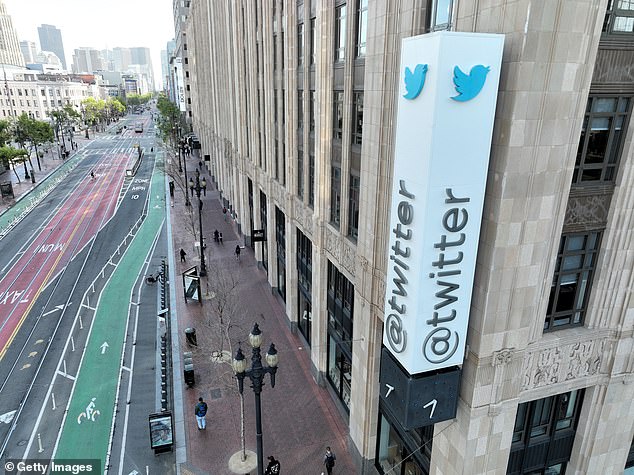 Twitter CEO Parag Agrawal announced a hiring freeze ahead of Elon Musk’s $44billion takeover, while two members of the social media giant’s top brass have been asked to leave.

Agrawal, 37, announced that Twitter will not be hiring new employees for the time being and may take back offers already out to prospective hires, according to an internal memo.

On Thursday, head of consumer product Kayvon Beykpour announced he would be leaving the company, saying Agrawal ‘asked me to leave after letting me know that he wants to take the team in a different direction.’

Beykpour had been on paternity leave for some time. He had been with the company for seven years.

Interim GM of consumer product Jay Sullivan will replace him.

He will be followed out the door by Bruce Falck, Twitter’s general manager for revenue.

It’s critical to have the right leaders at the right time,’ Agrawal said in the memo to staff.

He added that Sullivan’s ‘product vision, ability to inspire, move quickly and drive change is what Twitter needs now, and in the future.’

Things have been chaotic at Twitter since the company announced it was going to sell to Tesla CEO Elon Musk for $44billion.

Musk is set to cancel a $6.25billion loan to help with the buyout linked to his Tesla shares, now having the equity and preferred financing for the buyout, according to Bloomberg Law.

Employees have lashed out in recent weeks moaning about Musk’s purchase of their employer, with many claiming that the entrepreneur’s hardcore defense of free speech is ‘harmful.’

The deal is likely to be completed within the next six months, and has sparked widespread speculation Musk is planning a cull of 1,000 existing Twitter staff to boost profits.

Within the next three years, Musk anticipates making thousands of new hires, swelling the ranks to around 11,000 employees, up from 7,500 currently.

Much of the new talent is likely to be in the field of engineering.

On a company level, Musk has previously floated the idea of closing down the San Francisco headquarters in order to save money and that board members may also not receive a salary, shaving off another $3 million in expenses.

He has mooted turning the vast HQ into a homeless shelter in the vagrant and crime-plagued city, although it remains unclear whether Musk was joking.

The changes Musk makes are part of his plan to increase Twitter’s annual revenue by five times current levels to $26.4 billion by 2028, up from $5 billion last year.

Advertising on the platform is set to fall to 45% of total revenue under Musk, down from about 90% in 2020.

By 2028, he plans for ads to generate $12 billion in revenue in 2028, while subscriptions are expected to pull in another $10 billion, according to the report.

Musk is said to favor a subscription-based model over advertiser funding, as it would make Twitter less beholden to advertiser pressure.

He has even suggested users could pay with cryptocurrency, including joke currency Dogecoin which Musk has long had an affection for.

Other revenue would come from businesses such as data licensing.

Musk has also tweeted about potentially monetizing tweets, although he has not provided specific details.

Musk clinched a deal in April to buy Twitter for $44 billion in cash, in a move that will shift control of the social media platform populated by millions of users and global leaders to the Tesla chief.

The billionaire has promised to revitalize the company and expand the number of users by cracking down on spam bots and reducing the amount of moderation to facilitate more free speech.

Twitter has been condemned on banning conservative material it deems ‘harmful,’ including the verified contents of Hunter Biden’s laptop.

After the closure of the deal, Musk is expected to become Twitter’s temporary CEO it was revealed on Thursday.

Among his other goals, Musk expects the social media company to bring in $15 million from a payments business in 2023 that will grow to about $1.3 billion by 2028.

As one of the founders of PayPal, Musk is familiar with the world of digital payments.

Other mooted changes include blue verification checkmarks for anyone who subscribes to Twitter’s premium Blue service, which costs $2.99 a month.

Twitter Blue, launched in June 2021, is said to offer ‘exclusive access to premium features’ on a monthly subscription basis, Twitter says. It is available in the United States, Canada, Australia and New Zealand.

‘Price should probably be ~$2/month, but paid 12 months up front; account doesn’t get checkmark for 60 days (watch for credit card chargebacks) &amp; suspended with no refund if used for scam/spam,’ Musk said in a tweet from last month.

Dogecoin is widely seen as a joke cryptocurrency, with one Dogecoin worth $0.127 as of May 7

‘And no ads,’ Musk suggested. ‘The power of corporations to dictate policy is greatly enhanced if Twitter depends on advertising money to survive.’

Musk also proposed an option to pay with dogecoin and asked Twitter users for their views.

On Thursday, Musk listed a group of high-profile investors who are ready to provide funding of $7.14 billion for his Twitter bid, including Oracle co-founder Larry Ellison and Sequoia Capital.

Musk has increased the financing commitment to $27.25 billion, which includes commitments from 19 investors, and reduced a margin loan from Morgan Stanley tied to his Tesla stock to $6.25 billion.

Musk, the world’s richest man, is worth $255 billion – but much of that money is tied up in Tesla stock. He is believed to have ‘only’ $3 billion in cash, Bloomberg reported last month.

He has already secured commitments for $13 billion in loans against Twitter shares.