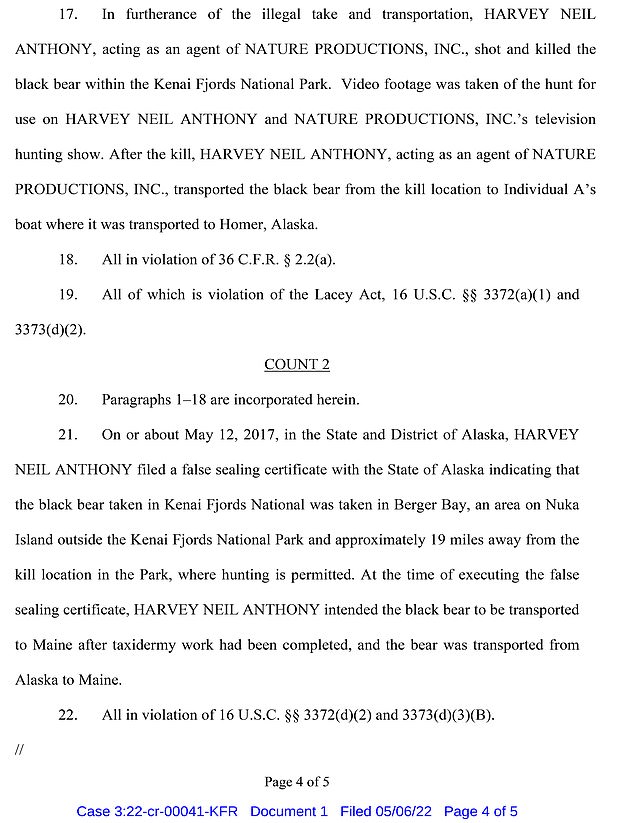 Harvey Neil Anthony – known professionally as Blaine Anthony – has been charged with violating the Lacey Act.

The federal legislation, first introduced in 1900, bans the trafficking of wildlife, fish and certain plants.

Anthony, 55, of Benton, Maine allegedly killed a black bear in the national park in May 2017 and later aired the footage on his show The Bear Whisperer.

The reality TV star allegedly lied on official paperwork about where the animal was shot, as it is illegal to hunt within the park.

‘Black bears occur throughout the Park and represent a significant wildlife component of its ecosystem,’ the complaint, first obtained by the Daily Beast, read. ‘Hunting is prohibited in the Park.’

The complaint alleged that on one of the multi-day manhunts in May 2017, Anthony and his crew killed a black bear on Pilot Harbor, which sits within the national park.

They later allegedly transported the bear to Homer on Individual A’s boat.

Anthony reportedly filed paperwork on May 12, 2017 falsely listing the kill-site as Berger Bay – a legal hunting spot – and not Kenai Fjords. The two areas are roughly 20 miles apart.