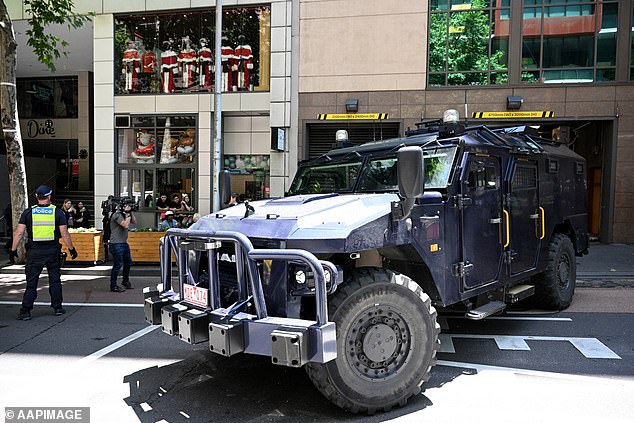 Police are taking no chances with the alleged international meth kingpin extradited to Melbourne, carrying him between court and jail in a military-grade wagon reminiscent of a vehicle from a Mad Max film.

Tse Chi Lop, who was arrested after a decade-long investigation into The Company organized criminal syndicate, is considered one of the most significant arrests in Australian Federal Police history.

The 59-year-old appeared before Melbourne Magistrates Court on Thursday, coming in the $930,000 heavily-armored Mack carrier that the Victorian government had constructed to transport its most dangerous criminals.

Tse Chi Lop appeared in Melbourne Magistrates Court on Thursday, arriving in the $930,000 heavily-armored Mack carrier that the Victorian government had constructed to transport the most dangerous criminals.

The 59-year-old Tse Chi Lop (shown) is allegedly the leader of the vast Sam Gor cartel in Asia. Thursday he appeared in court in Melbourne.

It took five years to outfit the Volvo-designed truck with ballistic protection, inside cells, touch-screen technology that controls a high-tech locking mechanism, and CCTV cameras.

Between March 2012 and March 2013, the police allege that Tse Chi Lop participated in a plot to smuggle 20 kilograms of methamphetamine or its derivatives.

He did not request bail and was transported to jail in an armored police car from court.

Life in prison is the maximum sentence for conspiring to trade commercial quantities of banned substances.

Police allege that the drugs had a street worth of up to $4.4 million and were distributed in separate quantities.

Dutch officers arrested Tse at Schiphol Airport in Amsterdam on January 22 of last year after the AFP requested an Interpol “red notice” for his provisional arrest.

Thursday, he was deported from the Netherlands to Australia.

Assistant Commissioner of the Australian Federal Police Krissy Barrett called the arrest as “very significant” for both the AFP and the Australian population.

She informed reporters that it would be one of the most significant arrests in the history of the force.

In June of this year, the AFP also charged Chung Chak Lee, a 66-year-old Chinese-British dual national, with conspiring to smuggle commercial amounts of drugs.

The 66-year-old is allegedly Tse’s accomplice in conspiring with junior Australian-based members to transit drugs between Sydney and Melbourne.

Ms. Barrett stated that it would be “foolish” to assume that the entire enterprise had been shut down, despite the fact that eight others have been arrested in connection with this subject.

The police transported him between court and jail in a military-grade Mack carrier that resembles a vehicle from a Mad Max movie.

In 2019, military-grade “paddy carts” were introduced in Victoria, each costing $930,000 and equipped with bull bars and flashing lights.

She stated that Tse’s arrest was especially notable because senior members of accused syndicates were normally “hands-off” in commercial transactions.

The syndicate allegedly paid for the drugs by impersonating an Australian casino and unlawfully using its identity on a bank account.

It’s a significant element of their business strategy, it’s not just getting the drugs into the country, but also being able to recycle the profits so they can reinvest in future projects.

»Tse Chi Lop, the alleged Asian El Chapo, is transported to court in a military-grade vehicle«