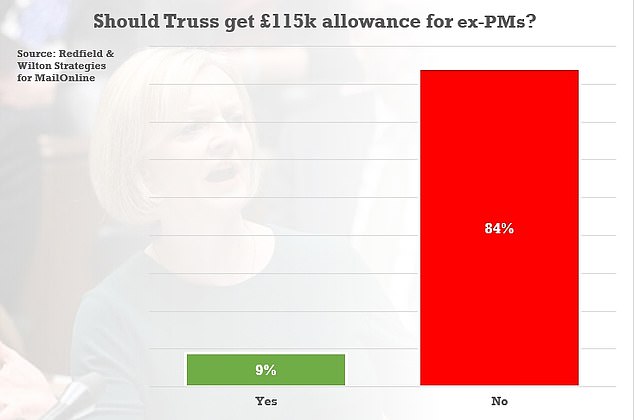 The majority of Britons do not agree that Liz Truss should get the £115,000-per-year allowance for former prime ministers to manage an office.

According to a MailOnline poll, 84% oppose Ms. Truss obtaining the ‘public duty’ perk after only 49 days in Downing Street.

According to research by Redfield & Wilton Strategies, only nine percent believe she should be entitled to the money.

Another 7% of respondents were unsure.

Ms. Truss is entitled to £18,860 in severance compensation despite being the UK’s shortest-serving prime minister when she turned over power to Rishi Sunak last week.

All former prime ministers are eligible to receive up to £115,000 per year in Public Duty Costs Allowance (PDCA) for expenses like a secretary and public engagements.

To access the cash, they must present evidence of valid expenditures.

Opposition parties have asked her to refuse the allowance and return any payments, claiming she has “no right” to keep it.

Nick Clegg also controversially earned the allowance for a number of years after serving as the Coalition’s deputy prime minister.

After her departure, Ms. Truss is supposed to be “taking a vacation” from frontline politics, while she remains an MP.

Michael Gove has issued an unusual apology to the British public for the Conservatives’ 49-day leadership of Ms. Truss.

The Leveling Up Secretary, a vociferous critic of the tax-cutting measures that sent markets into a tailspin, said he understood the public’s outrage that the government had taken a “vacation from reality.”

Ms. Truss’ premiership was significantly shorter than that of Tory statesman George Canning, who served as prime minister for 118 complete days in 1827 before passing away in office.

To reach this goal, Ms. Truss would have needed to remain in office until January 3, 2017.

Some prime ministers have served shorter tenure, but have subsequently returned to the position.

On October 25-26, Redfield & Wilton Strategies questioned 1,500 eligible voters in Great Britain online. The results were weighted to reflect the population as a whole.