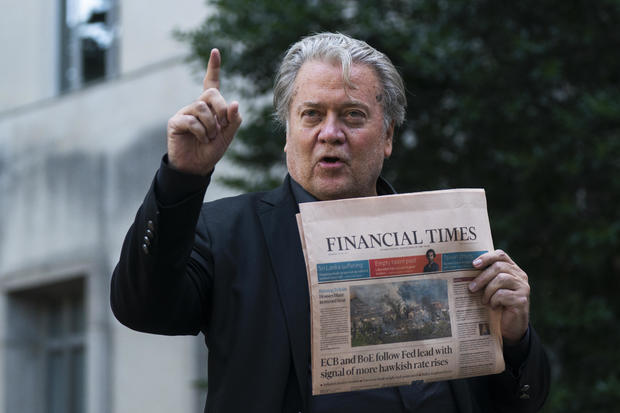 In Washington, After an hour-and-a-half of testimony, the government in the criminal contempt trial of former top Trump advisor Steve Bannon took a break on Wednesday.

It is “very unusual” for witnesses who receive a congressional subpoena to outright refuse to comply, according to the chief counsel for the House Select Committee looking into the attack on the Capitol on January 6, and the committee considered referring Bannon to the Justice Department for criminal contempt of Congress to be a “very serious step.”

According to Kristin Amerling, the committee urgently required Bannon to provide evidence on 17 crucial subjects, ranging from his conversations with former President Donald Trump to his understanding of the coordination of right-wing extremist groups in carrying out the attack.

She stated in court on Wednesday that this information “may potentially lead us to additional relevant witnesses or other important materials.”

After reportedly refusing to comply with a September 2021 congressional subpoena asking him to take a deposition and provide over documents related to the committee’s investigation, Trump’s former White House adviser is now facing criminal contempt charges.

Amerling was questioned by the prosecution regarding the subpoena issued to Bannon, her correspondence with his then-attorney Robert Costello over the requests, and the different processes that had been put in place to either assist Bannon in complying with the demand or settle any disagreements.

Amerling, who claimed to have had a major role in the creation and delivery of the subpoena, stated that she sent Costello the Bannon subpoena through email for the first time in September.

Amerling testified that Bannon never requested an extension and ignored the request.

Amerling claimed during cross-examination that she and Molly Gaston, one of the prosecutors in Bannon’s case, “overlapped” when serving on a congressional committee led by a Democrat and are currently members of the same book club.

The majority of the members are connected through the same congressional committee, so it is “not unusual that we would discuss about politics in some form or another,” according to Amerling, who claimed that neither she nor Gaston had attended a book club meeting in roughly a year.

Amerling denied any personal ties to Gaston when questioned by the prosecution.