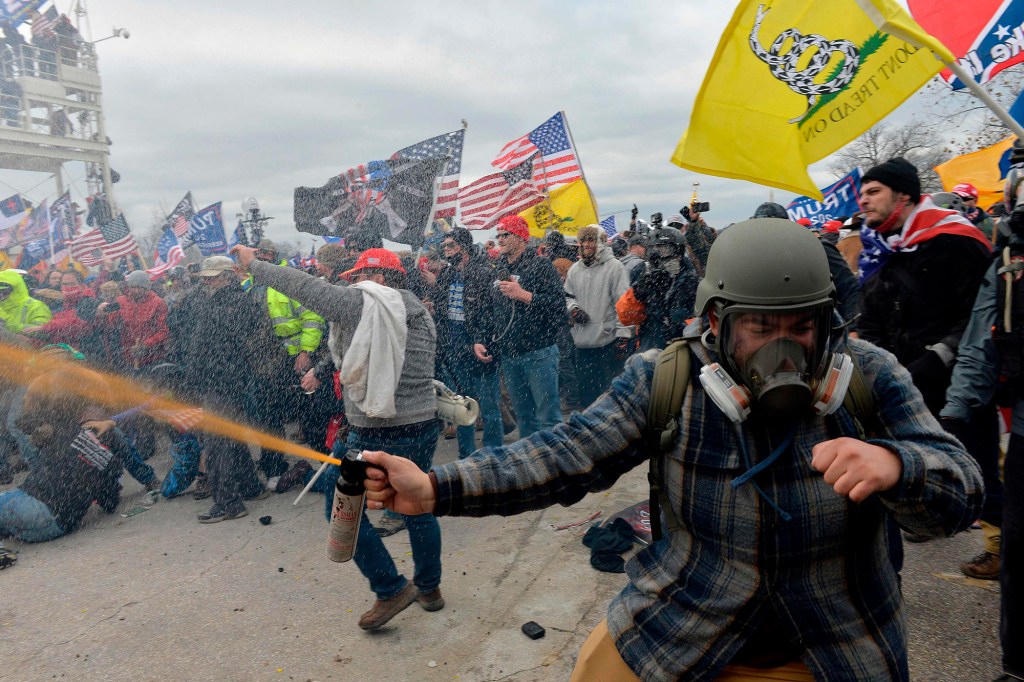 At least 28,000 fans of former President Donald Trump traveled to the nation’s capital on January 6, 2021, with many bringing weapons, brass knuckles, and screwdrivers, according to the final report of the House select committee investigating the events of that day.

The 814-page document, released late Thursday, derives the previously unreported crowd size from data from Secret Service magnetometers stationed at Trump’s pre-riot speech on the Ellipse near the White House, despite the fact that hundreds of the most extreme rioters skipped the rally and went directly to the Capitol.

The committee of seven Democrats and two anti-Trump Republicans agreed on Monday to request that the Justice Department charge the 76-year-old former president with crimes including encouraging an insurrection, and the report indicates that many attendees were actually prepared for violence.

242 canisters of pepper spray, 269 knives or blades, 18 brass knuckles, 18 tasers, 6 pieces of body armor, 3 gas masks, 30 batons or blunt instruments, and 17 miscellaneous items such as scissors, needles, and screws were confiscated from the 28,000 spectators who passed through the magnetometers, according to the report.

The story says, “[t]housands of others purposefully lingered outside the magnetometers or left their packs outside.” Others carried weapons.

“On the morning of January 6, three males in fatigues from Broward County, Florida brandished AR-15s in front of Metropolitan police officers on 14th Street and Independence Avenue. “At 11:23 a.m., MPD advised over the radio that one man was possibly armed with a ‘Glock’ at the intersection of 14th and Constitution Avenue, and another suspect was possibly equipped with a ‘rifle’ at the intersection of 15th and Constitution Avenue,” the document reads. “Between 12 and 1 p.m., the National Park Service apprehended a guy with a rifle,” Almost all of this was known before to Donald Trump’s appearance on the Ellipse.”

Trump allegedly attempted to order the removal of magnetometers so that more people could attend his rally, according to former West Wing assistant Cassidy Hutchinson, who quoted him as saying, “I don’t give a f*ck that they have weapons. They are not here to cause me harm. Remove the effing magazines. Allow my folks entrance. From here, they can march to the Capitol.”

Text conversations between Hutchinson and Secret Service agent Tony Ornato, who served as the deputy chief of staff for operations at the White House, record Trump’s ire.

Ornato wrote to Hutchinson, “He doesn’t understand that the people on the [Washington] monument side don’t want to enter,” according to the report. “Because they can see from there, they do not wish to enter. They can see from there and do not need to read magazines. With 30,000 wrapped within.”

The investigation lists a number of Trump supporters who brought or concealed firearms while the throng ransacked the Capitol, causing legislators to escape as they convened to declare Joe Biden’s Electoral College victory.

“On January 5, Christopher Kuehne, a member of the Proud Boys, met with buddies to discuss their plans for the next day… Kuehne informed them that he was armed and ready to leave. During the incident, Kuehne assisted in propping up Capitol blast doors as law enforcement retreated, according to the investigation.

“Guy Reffitt, a member of the Three Percenter movement from Texas, attended the gathering at the Ellipse and subsequently brought a loaded handgun into Capitol grounds. Jerod Thomas Bargar lost his gun, which he had been carrying from the Ellipse in a ‘We the People’ holster, around 2:30 p.m. on the west side of the U.S. Capitol. Bargar stated that he desired to be armed before entering the “belly of the beast.”

“Mark Andre Mazza drove from Indiana with a.45-caliber Taurus revolver loaded with both shotgun and hollow-point ammunition. After assaulting a police officer, he dropped or lost the weapon on the steps leading from the lower West Plaza to the Capitol’s West Front Terrace… Mazza later suggested that he intended to attack Nancy Pelosi, speaker of the House of Representatives.

The report describes how other Trump supporters brought firearms to the Washington, D.C. area, but ultimately did not enter the Capitol.

“Before attending the demonstration, Alex Kirk Harkrider of Carthage, Texas, and his co-defendant, Ryan Nichols, left firearms in a parked car just outside the district. Harkrider brought a tomahawk axe nonetheless. During the march to the Capitol, he reportedly exclaimed, “Cut their f—ing heads off!”

“One rioter reported to the Select Committee that he witnessed another wielding a ‘pitchfork.'” Mob members brought flags and utilized the flagpoles as weapons. Michael Foy, from Wixom, Michigan, carried a hockey stick with a Trump flag draped over it to the Ellipse. A few hours later, Foy utilized the hockey stick to repeatedly strike police officers at the opening tunnel.

“Former New York City police officer Thomas Webster carried a Marine flag, which he later used to strike an officer who was keeping back the rioters at the lower West Plaza. Danny Hamilton carried a flag with a pointed tip, which he claimed was “for a certain person”… Trevor Hallgren, [travel companion], remarked, “There is no escape.” Pelosi, Schumer, Nadler. We are coming after you… Even you AOC. We are coming to remove you. To yank you out by the hairs.’ On January 5, Hallgren accompanied Representative Barry Loudermilk on a tour of the Capitol, during which he photographed halls and staircases.”

According to the article, a second guy, Lonnie Coffman of Falkville, Alabama, parked near the Capitol before trekking nearly 2 miles to the Ellipse to hear the President speak. He had a handgun, a rifle, a shotgun, hundreds of rounds of ammunition, large-capacity ammunition-feeding devices, machetes, camouflage smoke devices, a bow and arrow, 11 Mason jars filled with gasoline and styrofoam, as well as rags and a lighter in his vehicle (tools needed to make Molotov cocktails). Later that day, when Coffman was arrested, police discovered two additional weapons on him.

Trump’s event outside the White House finished at 1:10 p.m., by which time scuffles had already erupted near the Capitol, but he did not broadcast a video ordering his supporters “you must leave now” until 4:17 p.m. The article has daytime photographs of Vice President Mike Pence, including one in which he appears to be observing Trump’s speech from a Capitol garage.

Others seized whatever they could find on the Capitol grounds, despite the fact that many Trump supporters carried their own guns. Numerous fire extinguishers were discharged or used as clubbing implements, along with stolen police riot shields and metal fencing.

One week after the violence, the House of Representatives impeached Trump for instigating an uprising. The Senate acquitted Trump by a vote of 57-43, with seven Republicans voting to find him guilty, which was insufficient to reach the two-thirds standard for conviction.

Trump emphasizes that he instructed supporters in the vicinity of the White House to “patriotically and peacefully” descend on the Capitol. Trump’s opponents add that he riled up the audience by alleging the election was “stolen” and urging them to “fight like hell” or they would “no longer have a country.”

The violent disturbances resulted in dozens of injuries, although only five deaths were related to the turmoil that day.

»Trump supporters were armed on Jan. 6, a panel report concludes«