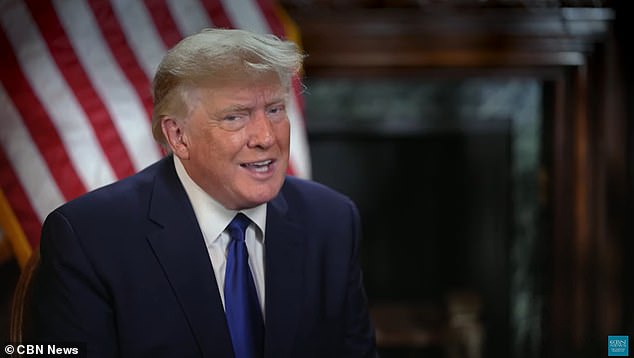 Former President Donald Trump dumped on his former VP Mike Pence’s political prospects in a new interview – where he said the conservative base ‘loves me’ and reiterated he was ‘disappointed’ in his former partner.

‘Honestly, I haven’t spoken to Mike in a long time,’ Trump told the Christian Broadcasting Network.

‘A long time is four or five months. I haven’t spoken to him in a long time. And he’s a nice man. He disappointed me on one thing because I think he should have sent the votes back to the legislatures,’ Trump said.

It was an obvious reference to Pence’s refusal to meet Trump’s demand that he refuse to count votes certified by states for Biden on January 6, 2020.

Trump, who holds high approval ratings within the Republican Party and who scored a victory when his favorite candidate J.D. Vance prevailed in the Ohio Senate primary, handicapped Pence poorly in a contested presidential primary.

‘So if Mike Pence gets into the 2024 presidential race, does the former president think his former VP has a shot?,’ CBN interviewer David Brody asked.

Then Trump immediately turned to his own political attributes. ‘I understand where the base is. I love the base. The base loves me. I think it’d be hard, but Mike was a good guy. I thought he was a very good vice president. He was my friend,’ he said.

Pence has spent years cultivating Christian conservative support. The former talk radio broadcaster carved out a voting record on conservative social issues as a House leader and member of the House GOP Caucus for a dozen years.

He frequently calls himself ‘a Christian, a conservative and a Republican, in that order.’

Pence got a standing ovation at the Faith & Freedom Coalition meeting in Orlando last year, but a small group jeered at him, calling him a ‘traitor.’

Trump’s analysis appeared to presume a theoretical race that included both himself and Pence. But he also said he’ll decide whether to make another run for the White House after the midterms.

Many Republicans will likely wait until then to make their own decisions. Trump’s camp has also been eyeing Florida Gov. Ron DeSantis as a potential rival. It went public early this year when Trump took a swing at DeSantis for failing to state publicly whether he had gotten a booster shot.

Sen. Mitt Romney is predicting Trump will be the GOP’s nominee in 2024 if he runs.

‘I don’t delude myself into thinking I have a big swath of the Republican Party,’ said Romney, who was the party’s presidential nominee in 2012 and was defeated by President Barack Obama.

‘It’s hard to imagine anything that would derail his support,’ he said, in comments reported by Axios. ‘So if he wants to become the nominee in ’24, I think he’s very likely to achieve that,’ Romney said.

‘He’s the leader of the party, that’s clear … If he decides to run, he will be the nominee,’ Romney said.