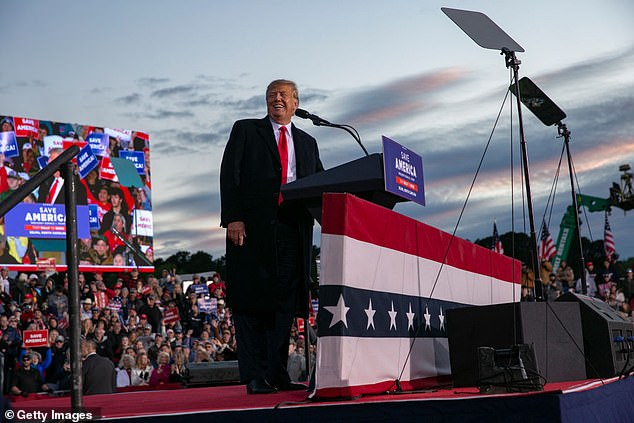 The former president was delivering an address at the Heritage Foundation retreat at the Ritz-Carlton in Amelia Island, Florida.

He bemoaned that no one calls for invoking the 25th Amendment against President Biden the way they did him after the Jan. 6 Capitol riot.

‘They don’t think about it out now – the 25th amendment,’ he told the crowd. ‘They would mention it anytime I had a great idea, the 25th amendment, there’s something wrong with him. That’s why I took the aptitude test and I aced it according to Doc Ronny,’ referring to White House physician-turned Congressman Ronny Jackson.

Trump added: That’s a test that even some geniuses in that room will not do that well on. I will tell ya, it’s not that easy a test.’

Trump took the Montreal Cognitive Assessment, an exam that tests for dementia.

Invoking the 25th Amendment would entail the vice president and a majority of the Cabinet offering a written declaration that the president is unable to discharge the duties and powers of his office, thereby transferring power to the VP.

The former president said that China and Iran ‘no longer respect us’ and that Russia ‘showed how weak’ U.S. leaders are with its invasion of Ukraine. But still, Trump said, ‘The greatest danger to our country is the destruction of our nation from within.’

‘So when we go back in, we can do it the right way and do what has to be done. Nobody can really criticize us very badly,’ Trump said, promising to throw ‘socialism’ and ‘wokeism’  to ‘the ash heap of history.’

‘I ran twice, I won twice, and we might have to do it again,’ Trump remarked.

The former president then revealed that he threatened not to defend North Atlantic Treaty Organization (NATO) allies against Russia if they didn’t pay up to their spending targets in 2018.

Trump implied that he made the bold threat as a negotiating tactic. ‘Now if I said, “No, I don’t mean that,” then why would they pay? So somebody had to say it.’

The former president then added that he was ‘amazed’ the conversation had not leaked during his presidency.

NATO’s guidelines say that each nation should pay 2 percent of its gross domestic product on defense by 2024.

The remarks come as NATO could potentially expand again in light of Vladimir Putin’s invasion of Ukraine. Finland and Sweden have signaled they will look to join the alliance.