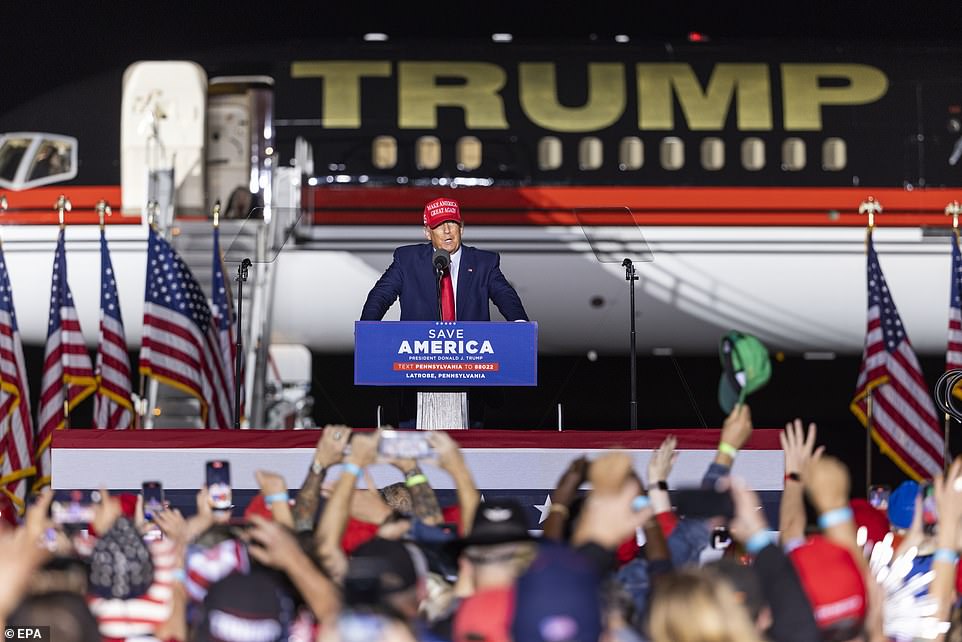 Former President Trump was in Pennsylvania on Saturday night, helping to make his final pitch in a crucial swing state ahead of the midterm elections next week.

Trump’s newly repainted, gleaming Boeing 757 touched down in Latrobe, where hundreds of people waited for hours to hear him speak.

Trump presented recent poll results on the large screens at the gathering and referred to Florida Gov. Ron DeSantis, a potential GOP opponent in 2024, as “Ron DeSanctimonious.”

In a two-hour rambling speech, Trump asserted that the country is ruled by ‘communists’ and repeatedly defended his efforts to overturn the 2020 election, before pushing Republicans to deliver a ‘humiliating rebuke’

“If you want to stop the devastation of our country and save the “American Dream,” you must vote Republican in a massive red wave on Tuesday,” he stated.

He repeatedly asserted that the only reason he lost the 2020 election was because Democrats cheated, and he raised the potential of election fraud next week.

Federal intelligence agencies have warned of the potential for political violence by far-right extremists in the coming days, in part due to such language.

“Everyone, I assure you, in the very next – very, very, very short amount of time, you will be happy,” Trump said of his second White House run. However, we must first achieve a historic victory for the Republicans on November 8.

Trump capitalized on the crowd’s anger over inflation in western Pennsylvania.

Polls indicate that Republicans have a commanding lead in the battle for the House of Representatives and are also gaining ground in the Senate races, as voters, agitated by culture wars over gay rights and abortion, seek to vent their anger over four-decades-high inflation and rising illegal immigration.

Democrats are extremely anxious about their slim majorities in the House and Senate, as Americans have soured on Vice President Joe Biden’s leadership amid rising prices, crime fears, and broad pessimism about the nation’s future.

Histories indicate that the Democrats, as the ruling party, will suffer severe midterm losses.

The visit was significant for Trump, who aspires to return to the White House and may launch his candidacy following the midterm elections.

As he has in a regular stream of rallies since leaving office, Trump is also attempting to preserve his own profile as he considers a third presidential run.

Simply by being present in the state, he will be able to solidify support in a region that provided him with substantial margins in 2016 and 2020.

The Fetterman-Oz Senate race is one of three decisive elections, along with Georgia and Nevada, that will determine whether Democrats retain their razor-thin majority in the Senate, and with it, the ability to confirm Biden’s nominations for positions ranging from the Cabinet to the Supreme Court.

Polls and predictions by nonpartisan election analysts indicate that the Republicans are heavy favorites to win control of the House of Representatives, while the Senate is a toss-up.

Controlling even one of these chambers would provide Republicans with the ability to thwart Biden’s legislative agenda and launch potentially damaging probes.

Before Trump ascended the stage in front of hundreds of fans and dozens of banners, local candidates took turns motivating their following with one watchword: inflation.

The prices are exorbitant, according to Norm Volpe, who accompanied his motorbike club to support Trump. Current inflation levels in the United States have not been seen since the 1980s, and Americans are struggling to pay for everything from food to gasoline.

A double rainbow appeared in the sky just before he spoke.

“This is the agreement. I’m a surgeon, not a politician, Oz told hundreds of Trump supporters. “And what surgeons do is handle large challenges, and we do it successfully by working with everyone,”

44-year-old Shawn Ecker Grey expressed enthusiasm for a potential Trump campaign in 2024, stating, “We need our country back.” We truly do. And it’s not going to happen if someone doesn’t stand up like he is.’

Leslie Boswell, 39, remarked, “He is the only candidate worthy of the presidency.”

“I adore Trump because he supports everything I believe… He brought God back to our country, he lowered our prices, and he achieved all he said he would do,’ she told AFP.

She traveled four hours to attend Trump’s speech. She states, “He is what America stands for, what America was before,” without elaborating on what she means by “before.”

In three days, there will be a red wave, the 52-year-old warned.

Pennsylvania is viewed as a must-win for control of the Senate, but it also weighs on the balance of power among the nation’s 50 state governors, crucial leaders who influence most aspects of voters’ lives, including education, health care, and voting rights.

Josh Shapiro, the Democratic nominee for governor, has been highlighting the extreme views of Doug Mastriano, his far-right opponent who was involved in Trump’s efforts to overturn the 2020 election.

A victory for Mastriano, who is backed by Trump, would grant the prominent election denier control of the state’s voting system for the 2024 presidential election.

Trump has visited Pennsylvania twice this year, most recently in early September to rally for Oz and Mastriano.

The 76-year-old businessman has already made unfounded claims that the state’s elections have been ‘rigged,’ echoing his false claims that his own 2020 loss was the result of widespread voter fraud.

Both parties have lavished Pennsylvania with attention because of the state’s strategic importance and its voters’ history of switching parties in the previous four presidential elections.

Volunteers are also dispersed throughout the state.

Throughout the summer, Fetterman, the state’s lieutenant governor, enjoyed a commanding lead in the race, which Oz has narrowed in the last two months.

The Pennsylvania Senate election is shaping out to be the most colorful, if not the most competitive. Initially, Democrats believed they could unseat retiring Republican Senator Pat Toomey.

But days before the Democratic primary, the frontrunner against Rep. Conor Lamb, Lt. Gov. John Fetterman, suffered a stroke. He won every county anyway. On the Republican side, former President Donald Trump chose TV personality Dr. Mehmet Oz over David McCormick, whom many conservatives viewed as the more electable candidate.

Even McCormick’s wife had worked for the White House under Trump.

Fetterman, unable to campaign due to his recovery from a stroke, employed web-savvy staffers to generate viral momentum, attacking Oz for being a wealthy, out-of-touch, New Jersey carpetbagger. Fetterman’s campaign utilized Jersey greats such as Snooki, flew a banner over the Jersey shore welcoming Oz home, and mocked the doctor for mispronouncing vegetable tray as crudite.

In the meantime, Oz spread the rumor that Fetterman may not be able to complete the task due to his health.

The race is viewed as a toss-up as a result of the barrage of ads from Republican groups that portray Fetterman as soft on crime.