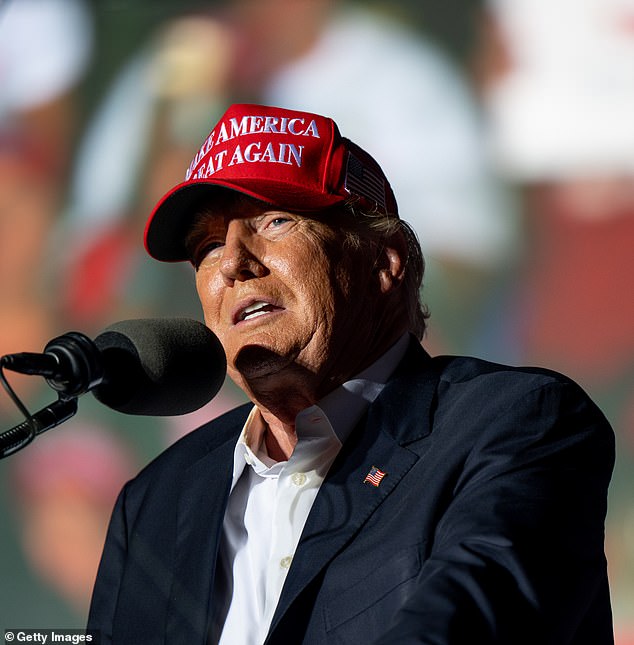 Former US President Donald Trump has announced that he will sue New York Attorney General Letitia James for $250 million in damages, challenging the prosecutor’s suit against him and his business.

Trump, 76, announced the lawsuit in an impassioned post to his Truth Social platform on Wednesday night, in which he called the attorney general ‘corrupt’ and ‘biased’ and referred to New York as ‘one of the most crime-ridden cities in the country.’

Trump further alleged that James has done little to protect her city from rampant crime, despite announcing plans last year to run for governor against Kathy Hatchel in the upcoming election but withdrawing after failing to raise the necessary funds.

Instead, the lawsuit alleges that the prosecutor has engaged in a ‘war of intimidation and harassment’ through her office’s investigation into Trump’s New York-based real estate company, which James alleges avoided paying taxes for 15 years.

The lawsuit, which was filed Wednesday evening in Florida circuit court, alleges that James abused her position ‘to pursue a relentless, pernicious, public, and unapologetic crusade against’ the ex-president, who resides in Palm Beach County, Florida.

Trump charged that the purpose of James’ alleged hunt is to ‘destroy him personally, financially, and politically.’

Trump is currently embroiled in a multitude of state, federal, and Congressional investigations, ranging from allegations of fraud against his family’s real estate empire to his handling of classified documents to his efforts to overturn the results of the 2020 election.

The lawsuit criticized James’ lengthy investigation as “contrary to both New York and Florida law,” arguing that it was initiated without evidence and “before a pretext existed.”

In addition, the complaint asserts that since her election in 2019, James has “developed within her office a policy of intimidating and harassing President Trump whenever feasible,” beginning during Trump’s presidency and continuing since he returned to his Palm Beach County house.

According to the lawsuit, the ultimate goal of James’ “ongoing intimidation and harassment” campaign is to cause Trump and the Trump Organization irreparable “damage” while gaining “undeserved prominence” for herself as a politician.

The lawsuit states that ‘James has repeatedly abused her position as Attorney General of New York to pursue a relentless, pernicious, public, and unapologetic crusade against President Trump, a resident of Palm Beach County, Florida, with the stated goal of destroying him personally, financially, and politically.’

The complaint alleges that last month, with midterm elections looming and James herself up for reelection, the prosecutor ‘began intensifying her attacks on President Trump to energize her political base’ by launching the $250 million civil suit.

James’ lawsuit alleged that Trump and other employees of his real estate firm committed fraud on a regular basis for fifteen years, artificially boosting his net worth by billions of dollars while misinforming banks and others about the true value of various properties.

In response, Trump’s lawsuit claims that the parties he allegedly deceived were among the most’sophisticated commercial lenders and insurance companies… in the world’ who were represented by’some of the largest, finest, and hardest law firms’

It adds that the documents presented by James’ office to demonstrate the ex-net president’s worth “included several disclaimers regarding the way in which the estimates were created.”

To put the AG’s fraud charges in perspective, the lawsuit asserts that President Trump’s assets bear relatively little debt and the majority are free and clear.

James seeks extraordinary oversight of President 3 Trump’s commercial and financial activities — including power over President Trump’s Florida revocable trust1 — while demanding $250 million in “restitution” for the citizens of New York, according to the complaint.

“In reality, James is aware that no reparation is due, but she merely desires publicity for herself and revenge against President Trump,”

Trump further criticized the state prosecutor when he announced the lawsuit on Wednesday, calling her tenure to date mainly ineffective and her efforts against him a scheme to increase her personal political status.

Trump wrote: “Today, I filed a lawsuit in the Florida State Circuit Court against the corrupt Attorney General of New York State, Letitia “Peekaboo” James,” using his nickname for the prosecutor.

New York State is one of the most dangerous regions on the planet, with murders, robberies, drug deals, and every other type of crime setting weekly records.

In the meantime, the politician added, “James does nothing to protect New York against these violent crimes and criminals, she attacks great and upstanding businesses that have done nothing wrong, such as the incredibly successful, job- and tax-generating Trump Organization that I have painstakingly constructed over many years.”

James believes it is the responsibility of the State of New York to go after my revocable trust and investigate my private estate plan in order to deliberately harm me, my family, my businesses, and my tens of millions of supporters.

Trump continued, “This would not be happening if I had not been elected President of the United States and am presently ahead in the polls by huge amounts against both Democrats and Republicans.”

“We must stand up for our Country, combat illegal persecution, and Restore America’s Greatness!”

Trump stated on his Truth Social platform, “The only person who may be weaker on violent crime than Attorney General Letitia “Peekaboo” James is the judge in her ludicrous and extremely biased case against me and my family.”

The Trump Organization consists of around 500 separate company organizations. Two of these organizations were charged by the district attorney’s office of providing rent-free residences and leased luxury vehicles to top executives who failed to pay taxes on the privileges.