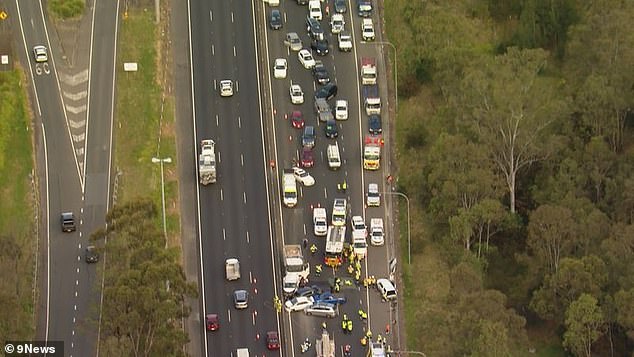 Following a horrific incident on Sydney’s M4, three drivers were sent to the hospital while 18 others were evaluated by paramedics.

After a truck and eight automobiles crashed on the highway at Prospect, in the city’s west, at about 4.40 pm on Friday, traffic was backed up for 11 kilometers.

Despite the fact that two men and one women needed medical attention, it is known that the majority of the participating drivers did not sustain significant injuries.

After the startling collision, emergency personnel had to extricate one guy who had been stuck in his vehicle.

He received medical attention for his head and legs before being sent to Liverpool Hospital in a critical but stable condition.

A second guy had minor head treatment, while a female driver received minimal head and hip treatment. In a stable condition, both were transported to Westmead Hospital.

The truck driver was brought to Blacktown Hospital for required tests.

The collision occurred during Sydney’s evening rush hour, when commuters were stuck in roughly 11 kilometres of backed-up traffic.

The Great Western Highway has been recommended to motorists in place of the M4.

The M4’s entire westbound lanes are shut down, and traffic is being detoured to the Reservoir Road exit.

The eastbound lanes of the highway are likewise congested, with lines extending more than 5 kilometers.

Traffic control personnel and emergency services are on the site.