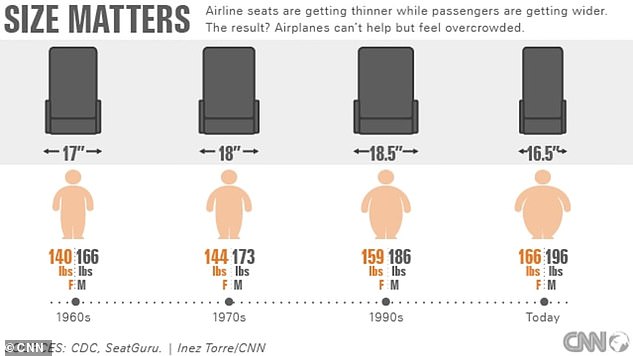 Angry passengers have urged that the FAA widen seats on passenger aircraft after airlines confirmed that they were downsized to meet recent demand and lower ticket rates, according to a string of stinging comments posted on the agency’s website.

Federal Aviation Administration (FAA) authorities solicited the public’s opinion on the size and subsequent safety of their regulated seats, which have shrunk dramatically over the years, in August.

In a matter of months, more than 26,000 people answered, with nearly all of them voicing reservations about the lack of legroom and comfort on American flights.

In more than 200 of the passengers’ posts, the word ‘torture’ is used to describe the deteriorating passenger experience on the most prominent airlines in the United States.

This past week, the public forum was closed, and the FAA, which has no guidelines for seat dimensions and is under pressure from Congress to make a decision over their recognized sizes, has yet to issue a statement.

It comes as numerous US airlines have disclosed they had lowered seat widths by up to two inches from the nearly ubiquitous 18.5 inches in recent years.

Some airlines have reduced legroom from 35 inches to 28 inches over the years.

It comes as numerous US airlines have disclosed they had lowered seat widths by up to two inches from the nearly ubiquitous 18.5 inches in previous years.

Additionally, legroom has decreased substantially, from an average of 35 inches to 31. On certain airlines, this distance – measured from one seat to the same seat in front or behind – is as short as 28 inches.

Since then, politicians and passengers have exerted growing pressure on the agency over the legality of these adjustments, citing worries that the seats are too cramped for passengers to leave.

Meanwhile, airlines have resisted proposals to broaden their seats, stating that the seats are already sufficiently wide and spaced apart to facilitate a swift evacuation.

“The present seats are too small for average-sized Americans, including myself,” a concerned commenter named Emily Clarke wrote to the agency in response to the influx of negative comments on seat size.

Clarke stated that she is afraid that the moves made by airlines to increase their profit margins “would severely hinder my ability to evacuate the aircraft promptly in the event of an emergency.”

She, like so many others, would urge the FAA to take action and demand those airlines with increased seat standards to address safety and comfort issues.

John Naughton stated in one such review, “My wife and I recently went to Grand Cayman on a Boeing 737 800/900 and were significantly uncomfortable in the narrow seats.”

Naughton remarked, “Not only are the little seats extremely unpleasant, but the crammed flights appear to represent a major hazard in the event of an emergency evacuation.”

Additionally, he stated that the confined surroundings “raise the potential for unwarranted tensions among the passengers.”

Other, taller customers objected about the conspicuously reduced legroom on flights, one of several procedures implemented by airlines in recent months to recoup costs sustained during the first two years of the pandemic.

Scott Parkinson, a 6-foot-5-inch man, complained in October that the lack of legroom required him to squeeze his knees into the seat in front of him in order to remain sat, putting him “in discomfort throughout the journey.”

The tourist went on to say that legroom on planes was excruciatingly inadequate.

“It’s even terrible when the passenger ahead of me reclines their seat,” he continued.

‘I usually experience back and knee pain when attempting to stand after a lengthy flight, and I find it difficult to walk. If I had to exit the aircraft in an emergency, it would be difficult and I would move much more slowly than usual.

He proposed that seats be put widely apart so that passengers have adequate leg room and their knees do not touch or crowd the seat in front of them.

Jill Kenney said that her son’s seats, who weighs 215 pounds and is approximately 6 feet 6 inches tall, are too short for his legs to sit properly.

In addition to being tall and having long legs, she stated that the seats are ‘too tight for me’

The concerned mother would then express safety concerns, which she claimed had been first in her mind when viewing the streamlined seats.

She projected further that airlines would charter fewer flights if passengers could fit more comfortably.

Kenney wrote, “my primary concern is safety.” If you are in a window seat, evacuating down the tight aisles may take too long.

She said, ‘There would be fewer fights on [airlines] if passengers could fit more comfortably. This year, I have gone on over 26 planes. I speak from personal experience.

In accordance with federal law, the FAA is required to rule on minimum safe seat dimensions with both safety and comfort in mind. Numerous further submissions aired almost identical complaints about the agency’s refusal to address these issues.

However, in official comments made to the FAA, Airlines for America and the International Air Transport Association encouraged the agency to prioritize safety before comfort and convenience.

Any decision made by the government – which recently boosted its average weight restrictions for passengers in response to Americans’ increasing weight – would be significant for the airlines, who have been balancing the need for cheaper price and more capacity.

The FAA, which governs all elements of civil aviation in the United States, continues to under pressure from Congress and passengers to make a decision regarding seat size reductions.

In the event of an emergency, federal regulations stipulate that passengers must evacuate the aircraft within 90 seconds, and a 2018 law mandates that the FAA establish the minimum safe seat size.