The maiden edition of “Town and Gown Series” has ended at the Nnamdi Azikiwe University Awka, with a call on Mass Communication Students and media practitioners to build their capacities at the early stage and explore opportunities in the new media to make good living and influence the society.

The programme, organized by the Department of Mass Communication, Nnamdi Azikiwe University Awka, in collaboration with an international non-governmental organization, Beyond Community Care Foundation, BECCAF, was aimed at bringing valuable interface between students and media practitioners.

Declaring the event open, a former Commissioner for Information, Chief Tony Onyima, who co-chaired the event with the Managing Director and Chief Executive Officer of the ABS, Chief Dr. Uche Nworah, underscored the importance of mentorship in media practice and tasked Mass Communication students to use the opportunity to learn how to develop good writing skills, create compelling media contents and network usefully, even as they urged training institutions to reflect emerging realities in the media ecosystem in preparing students for media practices. 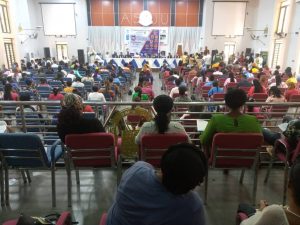 Speaking on the theme of the event, “Exploring Emerging Opportunities In Media and Communication, a guest speaker and Executive Director of West Africa Broadcast and Media Academy, Mr. Jika Attoh, said emergence of new media has thrown open many opportunities for media practitioners, adding that blogging, content creation, copy editing are some of the lucrative areas students can engage in to earn income, while using media practice to influence the society.

The Dean, Faculty of Social Sciences, Professor Uche Nwogwugwu and the Head of Department of Mass Communication, Professor Chinwe Uzochukwu, said the partnership between the department and the foundation is timely, as Mass Communication discipline is being unbundled to meet societal needs.

The President of Mass Communication Department, Mr. Chibueze Nginikanwa, and other students, who spoke to the ABS, including Messrs. Daniel Okebalama, Augustine Anwusi, Miss Kosisochukwu Aronu and Charity Dike, said the event offered them the opportunity to brace for the challenges in media practice, calling for its sustenance.

Correspondent Joseph Egbeocha reports that the event featured empowerment of indigent students of the department by the founder of BECCAF and a community leader in Amanuke Community, Awka North Council Area, Chief Dennis Ezebuilo, who represented by Mr. Onuora Aninweobodo said the foundation will continue to enhance rural development and reduce poverty through skills acquisition and sound education.