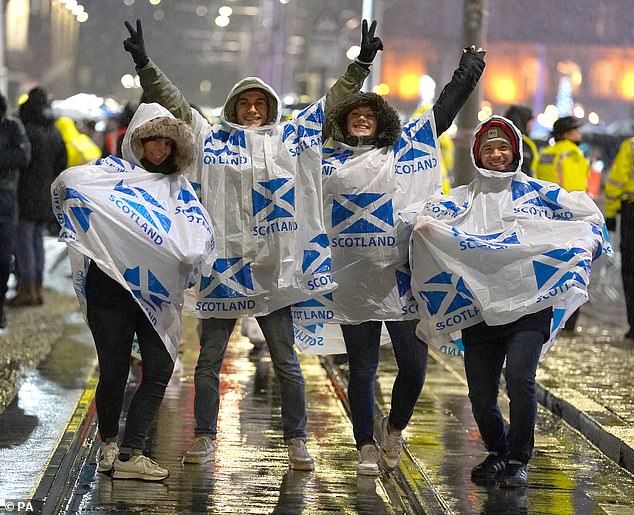 Yesterday, torrential rain caused transport mayhem in Scotland following a washout on Hogmanay, as the Met Office issued flood warnings and snow and ice alerts across the United Kingdom.

The rail network ground to a standstill due to flooded rails and landslides, while highways were restricted due to flash floods.

On New Year’s Eve, southern Wales and southwest England were under a yellow warning for rain.

The Welney wash in Welney, Cambridgeshire, fills with floodwater as The Old Bedford river and River Delph levels rise due to recent rainfall.

Southern Scotland will experience a wet and snowy start to the day, while the remainder of the United Kingdom will be dry with occasional showers.

According to forecasters, the unsettling weather in the UK is a result of the devastating bomb cyclone that caused temperatures to plummet during Christmas in the United States.

Met Office’s Nicola Maxey stated, “The extreme cold in the United States has increased the jet stream, which is delivering our rainy and windy weather.”

Southern Scotland will experience a wet and snowy start to the day, while the remainder of the United Kingdom will be dry with occasional showers.

This afternoon, precipitation is anticipated primarily in Wales and northern England, with icy downpours moving into Scotland.

Monday will be dry for the majority of the United Kingdom, with bright and potentially sunny periods in the east.

In the evening, a rain band moving towards the United Kingdom will bring cloudy conditions.

The inclement weather will continue into the evening.

Met Office officials have issued a warning for snow and ice in the north of the country, predicting further heavy rain.

A snowplow clears the A939 in the Scottish Highlands after a heavy snowfall.

A shopkeeper in Whitesands, Dumfries, closes his store due to flooding caused by the overflowing River Nith.

This will be followed by a more variable New Year’s Day, with the most of the unsettled conditions affecting Scotland, where rain will convert to snow on higher territory and continue to drift north.

The first few days of the week after next are expected to be drier and sunnier, followed by “showers or prolonged periods of rain.”

Flood duty manager at the Scottish Environment Protection Agency Vincent Fitzsimons said, “Many people are expected to travel prior to Hogmanay and are encouraged to plan their journeys in advance.”

Met Office officials predicted additional heavy rain and issued a warning for snow and ice in the north of the United Kingdom.

Yesterday’s torrential downpour, which prompted ten flood alerts and twenty-seven flood warnings, caused extensive disruption, including the suspension of rail services between Edinburgh and Dundee, Ayr and Glasgow, and the West Coast Main Line between Lockerbie and Edinburgh.

After the Met Office issued yellow warnings for rain in England’s South West and southern Wales and warnings for ice and snow in the Scottish Highlands, partygoers defied the weather to ring in 2023.

More than 100,000 people gathered along the Thames Embankment in central London to witness 12,000 fireworks explode in the sky as Big Ben tolled in England’s capital.

The sold-out event was intended to deliver a message of “love and unity” as it celebrated the Lionesses’ historic Euro win at Wembley, commemorated 50 years of London’s Pride with a message from Peter Tatchell of the Gay Liberation Front, and expressed solidarity for Ukraine.

The exhibit also paid homage to the late Queen with a recording of her voice and quotes from Dame Judi Dench, before honoring the King with a message from Charles about the need to safeguard the future of our world.

During the event, drones spelt out a hopeful message: “2023 with love from London” while fireworks exploded behind them.