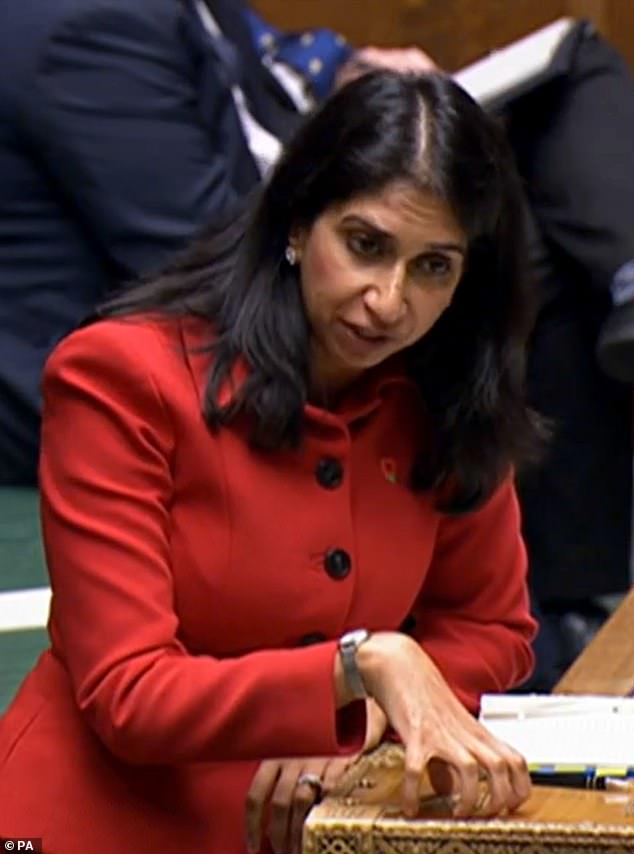 Today, Suella Braverman is receiving criticism for her ‘inflammatory’ statement that Channel migrants are ‘invading’ Britain.

Yesterday’s harsh language used by the Home Secretary in the House of Commons drew criticism from Tories and opposition parties.

Ms. Braverman defended her handling of the problem despite claims of congestion and illness outbreaks at the Manston processing facility by stating that the UK asylum system is “broken” and unlawful migration is “out of control.”

She asserted that only the Conservatives were “serious about halting the invasion on our southern coast.”

In interviews this morning, however, immigration minister Robert Jenrick sought to distance himself from the remarks.

“In a position like mine, you must choose your words with great care. And I would never demonize immigrants seeking a better life in this nation. I recognize and appreciate our responsibility toward refugees,’ he told Sky News.

“The magnitude of the difficulty we’re confronting is enormous.

“Fifty thousand people, and the number might be much higher by the end of the year, represent a big challenge for this nation.

It is causing the infrastructure we have in terms of receiving centres, such as Manston, hotel accommodations, asylum, and social housing to be practically overrun.

Invasion is a metaphor for the overwhelming magnitude of the challenge.

This is what Suella Braverman was attempting to convey. She was also saying, I believe, and this is an essential point, for those who live on the south coast and witness migrant boats landing on their beaches on a daily basis.

Mrs. Braverman has fought for her life on two fronts.

In addition to the fury over Manston’s overcrowding, she is also dealing with a persistent scandal about security breaches resulting from her use of a personal email address to deliver official documents.

The Home Secretary first resigned over the controversy, but was reappointed by the new prime minister, Rishi Sunak, barely six days later.

Criticism of his rehiring of Mrs. Braverman, as well as attention to her record at the Home Office, has threatened to overshadow his first few days in No10.

As she struggles to survive the twin controversy, Mrs. Braverman said last night that she is the target of a “political witch hunt.”

There are fears that the “inhumane” circumstances on the Manston site, which was planned to house only 1,600 people, pose a risk of fire, chaos, and infection due to the overcrowding.

Mrs. Braverman urged MPs against use ‘inflammatory language’ in regards to the gravity of the situation at Manston, but admitting that it was ‘undeniably disturbing’

However, the Home Secretary was criticized for her remarks when she characterized to the Channel migrant issue as a “invasion.”

MPs accused her of ‘inciting hatred’ and pointed out that her comments occurred just one day after petrol bombs were thrown at another Home Office building in Kent.

Ms. Braverman opened her address to the House of Commons tonight with an update on yesterday’s’shocking’ incident at Dover’s Western Jet Foil.

She informed the members of parliament that ‘two to three incendiary devices’ were hurled at a Border Force immigration center.

She stated, “The suspect was recognized, soon located at a neighboring gas station, and confirmed dead.”

The Explosive Ordnance Disposal Unit was dispatched to check that there were no additional dangers. Kent Police are not treating this as a terrorism event at this time.’

The embattled Home Secretary also provided a broader evaluation of the Channel migrant issue, which has already seen 40,000 individuals land on the South Coast this year.

“We must be honest with the public. The system is defective. “Illegal immigration is out of control,” Ms. Braverman warned members of Congress.

She asserted that only the Conservatives were “serious about halting the invasion on our southern coast.”

The Home Secretary stated, “Approximately 40,000 migrants have come on the South Coast this year alone.”

‘Many of them were facilitated by criminal groups, while others were real gang members. Therefore, let’s stop pretending that they are all displaced refugees. The entire nation knows that is not true.

Mrs. Braverman’s remark to a “invasion” on the southern coast of England was promptly criticized by opposition lawmakers.

Zarah Sultana, a Labour MP, accused the Home Secretary of using language that “stirs up hatred and sows discord”

Kim Johnson, a Labour backbencher, said that the government must cease inciting hatred.

Alistair Carmichael, the home affairs spokesman for the Liberal Democrats, stated, “If the asylum system is broken, it is because the Conservatives have wrecked it.”

This scandal-plagued Home Secretary has lost any credibility. These migrants are not an invasion; they want to establish a life for themselves and their families, contribute to our culture and economy, and sustain themselves rather than relying on charity.

The Home Secretary is under pressure over the situation at Manston after it was reported that she neglected to act on legal advice indicating that migrants were being detained at the site for unreasonably lengthy durations.

She was also accused to have prevented the relocation of thousands of refugees to hotels this summer, resulting in congestion and epidemics of scabies and diphtheria, according to the allegations.

In her statement to the House of Commons, Mrs. Braverman denied preventing refugees from sleeping in hotels and said she had “never disregarded legal advice” about asylum-seeker housing.

The Home Secretary stated, “To be clear, like the majority of British citizens, I am deeply worried about hotels, but I have never restricted their use.”

“Since I took over, 12,000 people have arrived, and 9,500 people have been transferred out of Manston or Western Jet Foil and into hotels, the majority of them.”

As a former attorney general, I am well aware of the significance of considering legal counsel.

“Allow me to describe to the House the position at the Home Office when I arrived in September as Home Secretary,” she added.

I was appalled to learn that over 35,000 migrants were staying in hotels across the country at exorbitant taxpayer expense.

“I initiated an immediate review. I exerted pressure on government officials to identify housing options that would be more cost-effective and swiftly delivered, while also meeting our legal obligations to migrants.

Sir Roger Gale, the MP for the North Thanet constituency in Kent, where the Manston site is located, asserted that until five weeks ago, the facility had been operating “absolutely magnificently” and “very efficiently.”

He stated, “Unfortunately, the Home Secretary made the policy decision not to commission additional housing, and it is this decision that has led to the crisis at Manston.”

Sir Roger urged Mrs. Braverman to provide assurances that the Manston facility will not become a “permanent refugee camp.”

The Home Secretary said, “On no occasion have I obstructed the procurement of hotels or alternative housing to alleviate strain on Manston; I’m afraid that statement is simply false.”

Rachel Maskell of Labour stated that circumstances at Manston were “obviously hazardous and inhumane.”

She continued, “We are well aware of the misery that the people there have endured after 12 years of awful government oversight.”

In her response, Mrs. Braverman asked members of Congress not to “unnecessarily cause concern,” adding, “So when she discusses the terminology she uses, I gently advise her not to use inflammatory language.”