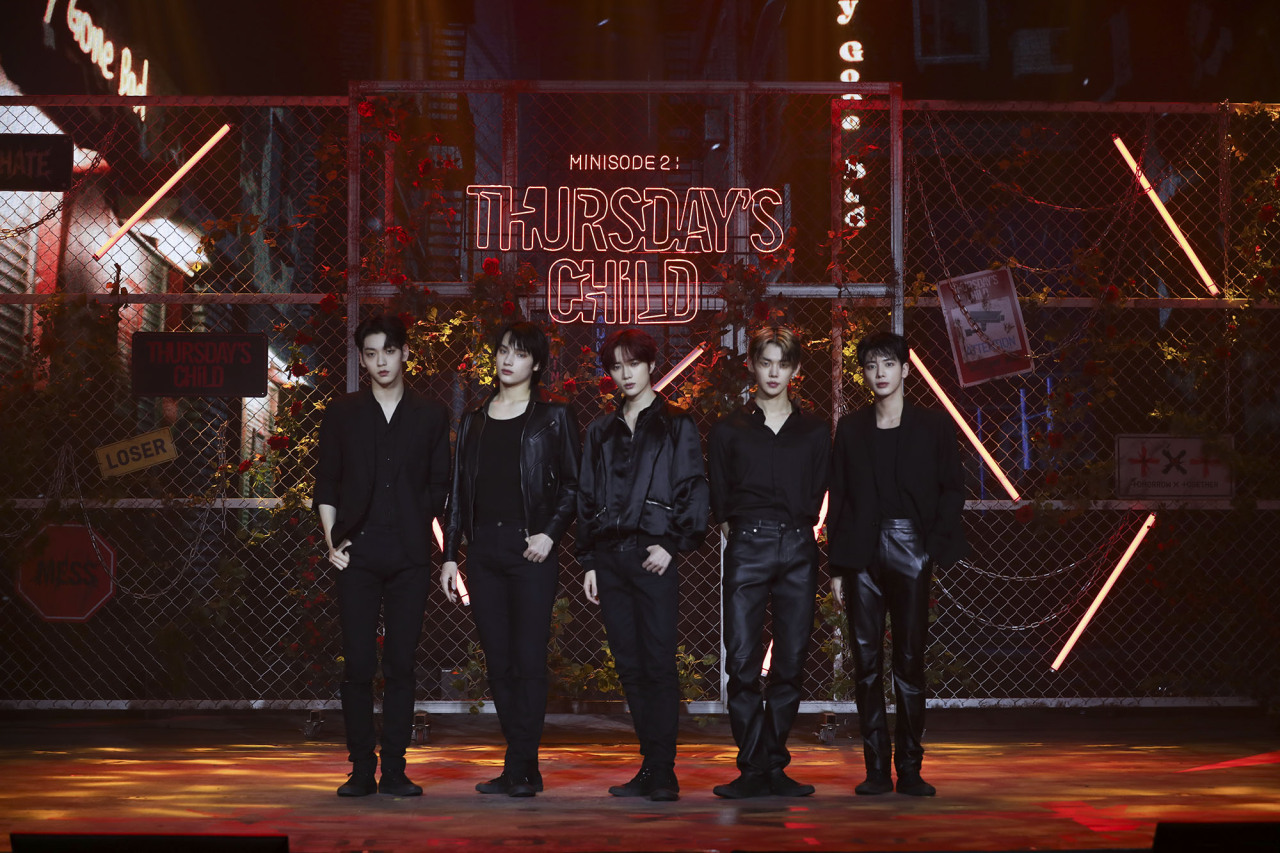 No one finds their first breakup easy, but it does not have to be all tears and anger. That’s the message from K-pop boy band Tomorrow X Together on their new album “minisode 2: Thursday’s Child.”

Before dropping the album, Tomorrow X Together, also known as TXT in short, held an in-person media showcase in Seoul on Monday.

Leading the album is “Good Boy Gone Bad,” a hardcore hip-hop track infused with a rock sound that depicts an innocent boy engulfed in anger and loss after a breakup.

“It’s a breakup song like no other. Usually breakup songs are about being sad or regretful, but our song portrays a different set of emotions, from the feeling of rage to getting engulfed by such emotional state,” Beomgyu said.

The boys were dressed head-to-toe in jet black outfits to match the dark, moody concept of the song.

“We knew we had to do this concept at least once. A breakup is inevitable in the process of growth, and we learn new emotions through it. I also discovered a new aspect of myself through this concept,” Huening Kai said.

The fourth extended-play from TXT, the new release is a five-track album carrying the diverse emotions felt by Someone enduring a breakup with a first love he believed would last forever.

The album acts as a bridge linking their “The Chaos Chapter” series with the next phase of their coming-of-age story.

It was Yeonjun’s second time contributing to the songwriting, following his input on “Loser=Lover,” from the group’s repackaged second studio album “The Chaos Chapter: Fight or Escape.”

“It’s an honor to have participated in writing the rap for the songs. I’m happy to be able to tell my story through music. As it was a genre I’ve never before tried, I worked harder to make my raps more perfect,” Yeonjun said, adding the lyrics of “Good Boy Gone Bad” has some elements continuing from “Loser=Lover.”

Soobin, the band’s leader, said all five members made extra effort in acting out the emotional uproars.

“All five of us are fairly gentle, so depicting the anger was awkward for us. I watched movies and dramas to practice focusing on the emotions,” he said.

During the press event, the boys performed live “Good Boy Gone Bad,” along with a subtitle track “Trust Fund Baby” from the album.

An emotional pop ballad mixing Korean and English lyrics, the song sings of a cynical attitude of a boy who feels love is a luxury for if you don’t have enough money.

“The story follows on from ‘Loser=Lover.’ It rolls out the sense of deprivation watching a trust fund boy. There’s minimal instrumental accompaniment, so I could focus more on the lyrics while I recorded the song,” Beomgyu said.

Taehyun, who also participated in the penning of the lyrics, said he was largely inspired by his own emotions that he had felt before his debut as a K-pop idol.

“I related deeply with the topic, so I knew I could write well,” Taehyun said, adding, “I used to envy people who easily got another chance with cash in playing games, those who had better equipment and instruments. The lyrics come from then.”

The album also comes with the first two unit tracks from the five-piece — “Lonely Boy” by Yeonjun and Huening Kai and “Thursday’s Child Has Far To Go” by Taehyun, Soobin and Beomgyu.

The band also notched up their first million-seller title with the new album, even ahead of its official release, with pre-order sales exceeding 1.46 million units.

The boys aspired to reach even higher with “minisode 2: Thursday’s Child.”

It’s not all about scores and numbers, though, as the members stressed their pride at their musical acceleration with the album.

“It’s the first album where the members contributed to all the tracks on the list. We really felt that we’ve advanced as an artist,” Beomgyu said.

Taehyun piped in, saying, “Many people praised our albums on ‘The Chaos Chapter’ series as masterpieces, and we’re very proud of it. This time, the album threads together different elements and genres through the topic of first breakup, and hopefully it could also get a good remark. We hope to prove TXT’s music never disappoints.”

Meanwhile, the band also shared excitement ahead of their first ever world concert tour.

“It’s a time that we’ve been waiting for for so long, and also a time we will come together with Moa (the name of TXT’s fanbase). We’re preparing little by little these days, and we want to meet many of our fans in different cities. We hope to return as much energy as we have received form Moa,” Beomgyu said.

Taehyun anticipated they will be able to perform all five new songs on the fourth EP during the world tour.

Kicking off in Seoul in July, the band will travel around several cities in the US, including Los Angeles, New York, Atlanta and Chicago.