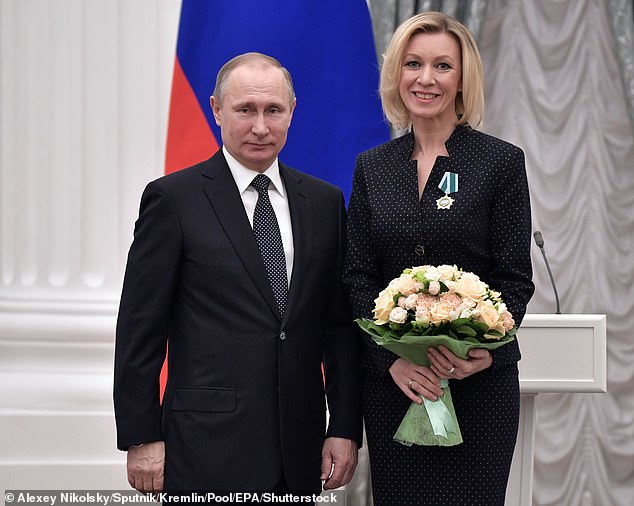 60 Minutes reporter Tom Steinfort attempted to give Volodymyr Zelensky a packet of Tim Tams and bottle of red wine before the gifts were confiscated.

Steinfort wanted to give the iconic chocolate biscuits and Penfolds wine to the Ukrainian president after he agreed to an interview with the Nine Network.

The veteran reporter flew with his production team to the Ukraine and awaited further instructions on where to meet Zelensky for the sit-down.

Steinfort received a text message at 10.39pm informing him of the location before he went to the undisclosed bunker in Kyiv with his gifts in hand.

Ukrainian soldiers stopped Steinfort at the door before confiscating the items, he wrote for the Sydney Morning Herald.

‘We need to send these away for testing before giving them to the president, we can’t risk radiation poisoning,’ the soldiers told Steinfort.

Steinfort said his production team had to pass through several roadblocks being patrolled by armed troops, follow soldiers down a concealed alleyway and go through an x-ray machine before meeting Zelensky.

‘There, we have to put all of our equipment through x-ray machines, go through more passport checks, and are then handed to the dog squad who sniff our belongings for explosives,’ he wrote.

The production team were led to the same room where Zelensky had met with US Secretary of State Antony Blinken for face-to-face talks days earlier.

Steinfort said Zelensky pulled him to the side to chat with him briefly before the cameras recorded the interview.

The Ukrainian president had nothing but praise for Australia.

Before our cameras roll, he wants to tell me about how much he loves Australia – volunteering a story about when he visited Sydney many years ago, and got lost on a morning run,’ Steinfort wrote.

‘He says he was struck by how many complete strangers offered to help this random Ukrainian find his way back to his hotel.’

The 60 Minutes segment will air on Channel Nine on Sunday.

Prime Minister Scott Morrison says there is no rush to deal with the issue of Russian President Vladimir Putin attending the next G20 leaders’ summit.

Mr Putin and Zelensky have agreed to attend the G20 summit to be held in Bali in November.

Russia is a member while Mr Zelensky would attend as an invited observer.

G20 host leader and Indonesian President Joko Widodo has spoken with Mr Zelensky and Mr Putin, urging them to end the war and offering to play a role in peace negotiations.

Indonesia has rejected the Ukrainian leader’s request for arms on constitutional and foreign policy grounds, but instead will send humanitarian aid.

Mr Morrison told reporters in Sydney on Sunday the issue of Mr Putin’s attendance ‘still has some distance to travel’.

He said Australia would consult with other like-minded countries, but the key was to ensure the Indonesian summit was successful.

‘We don’t know what the situation (in Ukraine) will be in November of this year,’ Mr Morrison said.