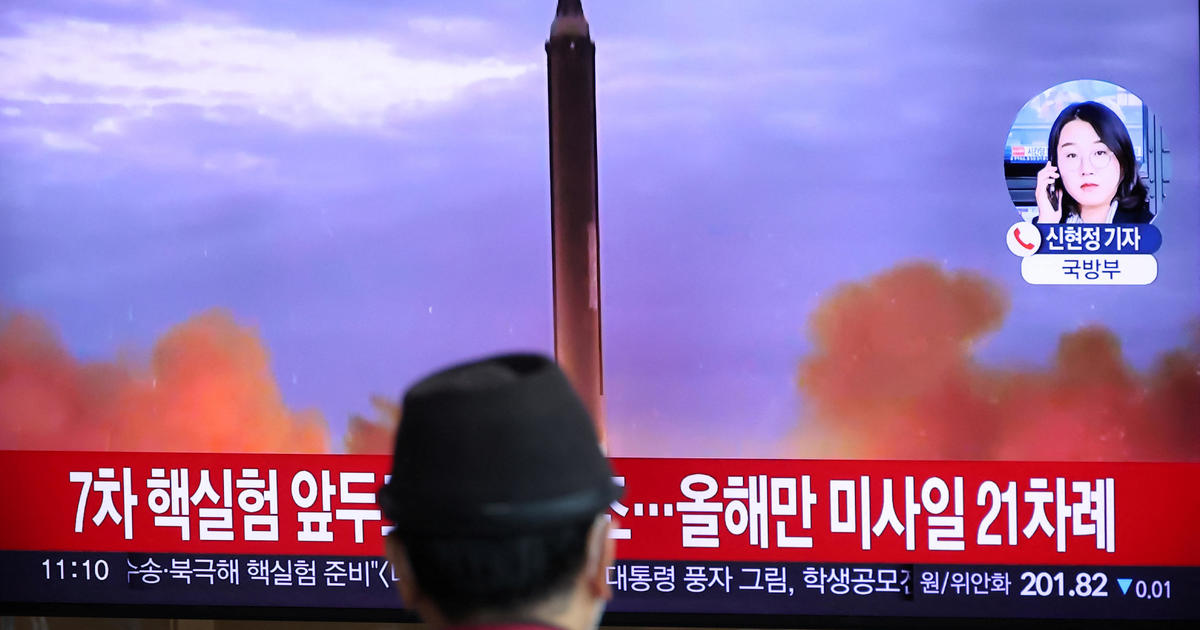 Located in Seoul, South Korea — North Korea launched a ballistic missile over Japan for the first time in five years on Tuesday, prompting Japan to issue evacuation notices and suspend trains throughout the flight of the nuclear-capable missile, which could reach the U.S. island of Guam and potentially beyond.

According to some experts, the launch was North Korea’s most provocative weapons demonstration of the year, as it ramps up missile tests to build a full-scale nuclear arsenal that poses a credible threat to U.S. allies and the American homeland in an effort to extract concessions from the international community.

The missile’s projected 2,800-mile journey was the farthest of any North Korean missile, but the North has previously launched possibly longer-range weapons at steep angles to skirt nearby countries.

A man watches a television news coverage about North Korea launching a ballistic missile over Japan on October 4, 2022, at a train station in Seoul, South Korea. KIM HONG-JI / REUTERS

The State Department stated that U.S. Secretary of State Anthony Blinken spoke separately with his Japanese and South Korean counterparts and that all three “strongly condemned the launch and its flagrant disregard of multiple UN Security Council resolutions and its profoundly destabilizing implications for the region.”

National Security Council spokesperson Adrienne Watson said in a statement, “The United States will continue its efforts to constrain (North Korea’s) capacity to advance its prohibited ballistic missile and weapons of mass destruction programs, including with friends and U.N. partners.”

Charles Michel, president of the European Council, sharply condemned the launch in a tweet, calling it “an unwarranted action and a flagrant violation of international law.”

President Yoon Suk Yeol of South Korea previously stated that the missile had an intermediate range, while Japanese Defense Minister Yasukazu Hamada stated that its range was likely intermediate or longer. Some experts believe that if Tuesday’s launch featured a long-range missile, it could have been a test of a weapon aimed at the United States.

In the first “J-alert” since North Korea launched two intermediate-range Hwasong-12 missiles over Japan in a matter of weeks in 2017 during its latest flurry of nuclear testing, Japanese officials urged residents in northeastern regions to evacuate to shelters.

Train service was suspended in Hokkaido and Aomori until the authorities released a notice that the North Korean missile had apparently landed in the Pacific. Subways were also momentarily suspended in Sapporo, the prefectural capital of Japan’s northernmost major island of Hokkaido, with stations filled with morning commuters.

The Japanese prime minister, Fumio Kishida, told reporters that the most recent dismissal “is an act of recklessness that I strongly condemn.”

South Korea cautioned that North Korea’s frequent missile launches will only increase its worldwide isolation and force Seoul and Washington to strengthen their deterrence capabilities.

The North’s “reckless nuclear provocations” will be met with a strong response from the South and the international community as a whole, according to Yoon.

South Korean and Japanese estimations indicate that the missile went around 2,800 to 2,860 miles at a maximum height of 600 to 620 miles. There have been no indications of damage to Japanese planes or ships, according to Hamada, who stated that the asteroid impacted in the Pacific approximately 2,100 miles from the northern Japanese shore.

The Defense Ministry of South Korea stated that the missile traveled farther than any prior weapon launched by North Korea. Before Tuesday’s launch, Hwasong-12’s 2017 flight of 2,300 miles was the farthest in North Korea. It has previously tested intercontinental ballistic missiles at steep angles, hence reducing their flight distance.

The missile has the range to reach the U.S. Pacific territory of Guam, which is home to U.S. military bases that dispatched sophisticated jets to the Korean Peninsula during earlier crises with North Korea as a show of force. In 2017, North Korea threatened to launch Hwasong-12 missiles near Guam to create “an encircling fire” in response to escalating tensions with the Trump administration.

In January, North Korea conducted its last Hwasong-12 missile launch. The North stated at the time that the purpose of the launch was to verify the overall accuracy of the weapon, which was fired at an angle to prevent it from flying over neighboring nations.

Tuesday’s missile could have been another Hwasong-12, according to Hamada.

Kim Dong-yub, a professor at the University of North Korean Studies in Seoul, stated that North Korea could have launched the Hwasong-12 or perhaps an intercontinental ballistic missile with a trajectory similar to that of a conventional ballistic trajectory but with a shorter range. Kim stated that if it were an ICBM, the goal of the launch would be to determine whether or not the warhead could withstand the extreme conditions of atmospheric reentry.

The launch on Tuesday is North Korea’s sixth set of missile tests in the past ten days, and is seen as an obvious response to last week’s military exercises between South Korea and the United States and other training among the allies, including Japan. They are viewed as invasion rehearsals by North Korea.

The missiles launched during the previous four launches were short-range and landed in the waters between the Korean Peninsula and Japan. These missiles are capable of striking South Korean targets.

This year, North Korea’s leader Kim Jong Un has refused to return to nuclear talks with the United States while attempting to perfect the country’s weaponry by launching over 40 missiles in 20 separate launch events.

North Korea enacted a new law this month that authorizes the preemptive use of nuclear weapons in certain circumstances, demonstrating its increasingly assertive nuclear posture. Saturday before last, Yoon warned of a “overwhelming response” if North Korea utilizes nuclear weapons.

Some foreign specialists assert that North Korea must master a few remaining technologies in order to get nuclear missiles that are operational. Each new test brings them closer to being able to hit the U.S. mainland and its allies with a variety of nuclear-tipped, long-range missiles.

Some observers believe Kim will eventually return to negotiation and use his expanded arsenal to compel the United States to recognize North Korea as a nuclear power, which he believes is vital to obtain the easing of international sanctions and other concessions.